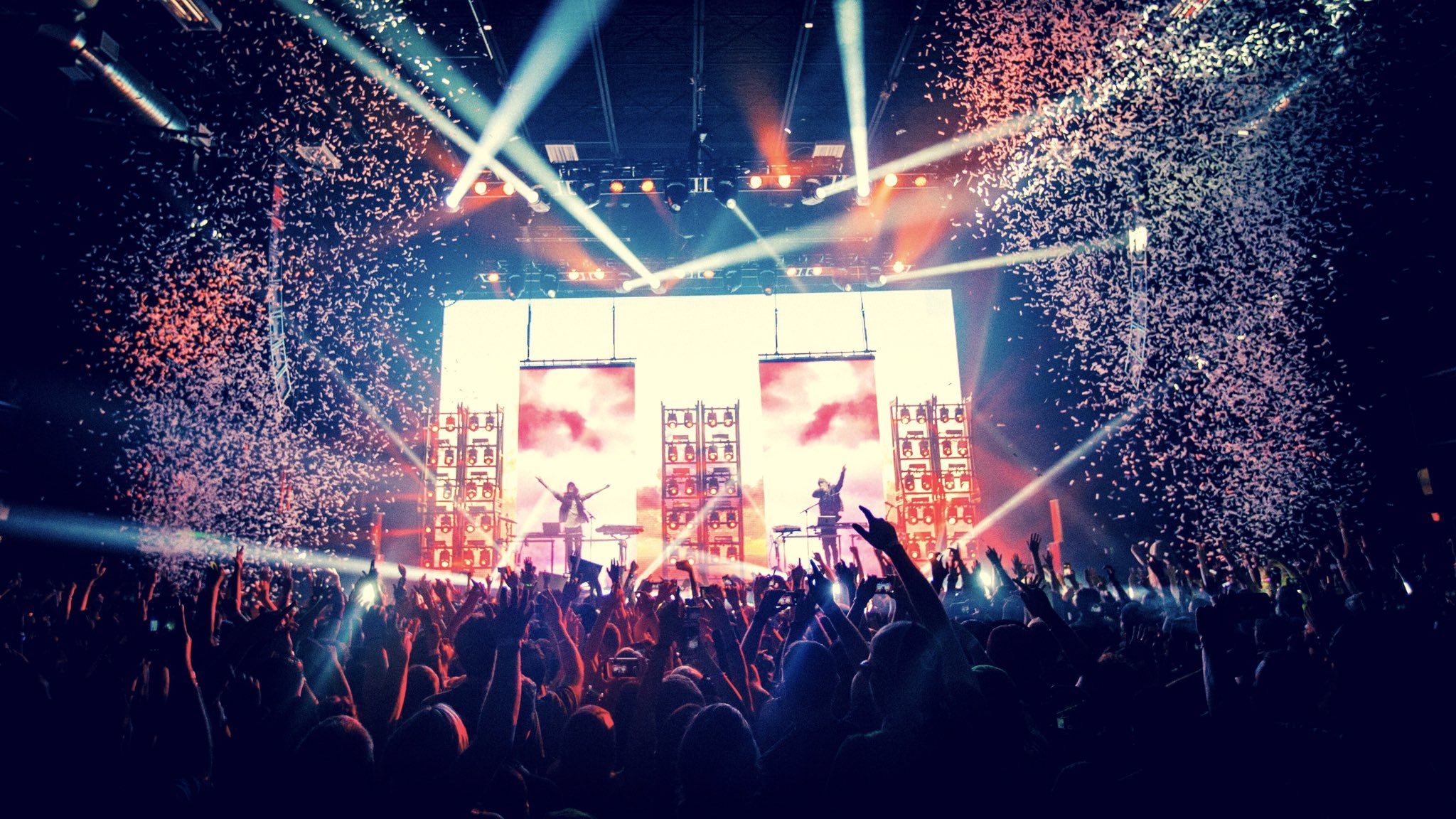 Madeo & Porter Robinson are in town this month (Madeon/Twitter)

The crisp air has begun. Soon it will be daylight savings time, and we will have shorter days. But when the sun goes does, the good music begins – or something like that.

Either way, there are tons of awesome artists in town this November. From The 1975 to Porter Robinson, or locals Majid Jordan and Tory Lanez, the month is packed.

So enjoy the start of winter, bundle up, and we’ll see you at a show!

American rock group Band of Horses return to Toronto in November, touring their fifth studio album Why Are You OK? Since their first LP Everything All The Time, the South Carolina-based band have been pillars of indie rock for a decade, releasing four studio albums in total, including 2010’s Grammy-nominated Infinite Arms and Mirage Rock.

UK art-pop quartet The 1975 are making a stop in Toronto during their North American tour on November 3 – same day as Band of Horses! The headline tour will be in support of their #1 US and UK sophomore album, I like it when you sleep, for you are so beautiful yet so unaware of it.

Juno Award-winners Arkells recently announced their 2017 tour, which stops at Hamilton – their hometown. But this month, the guys will be at Massey Hall with Frank Turner & The Sleeping Souls. The band is touring their fourth and latest studio album Morning Report, which includes their chart-topping single “Private School.”

Detroit’s Danny Brown is no stranger in today’s hip hop scene. From touring with A$AP Rocky, to his tracks like When It Rain – from his yet-untitled new record- Brown continues to build his fan base. It will be no surprise if he is hip hop’s next massive thing.

When: Friday, November 4 at 8 pm
Where: The Phoenix Concert Theatre, 410 Sherbourne Street
Tickets: Available online at $28. 19+

Ex-Black Flag member, author, actor, motivational speaker Henry Rollins returns to Toronto this month. Rollins is trekking across North America, voicing his opinion on the state of the nation on the Spoken World Tour 2016.

UK pop band Pet Shop Boys are celebrating the 30th anniversary of debut album Please with a world tour that brings them back to Toronto. The duo released their 13th album Super this year and continue to wow their fans on this SUPER tour.

When: Sunday, November 6 at 9 pm
Where: Sony Centre For The Performing Arts, 1 Front Street East
Tickets: Sold out.

UK singer/songwriter Holly Lapsley Fletcher brings her haunting voice to Toronto this month. Following the successful release of her debut album Long Way Home, Lapsley has been on tour and the world sings along to her mega single “Station.”

Texas-natives Pentatonix have taken the world by storm with their modern a cappella style. Their videos have gained over hundreds of million views, and their shows keep selling out. This is Toronto’s chance to check out this live sensation.

American hip hop artist and record producer Russ is quickly gaining a name for himself in the industry. With over 40 million plays on Soundcloud, and a string of sold-out shows, it will be no surprise to see Russ at a much larger venue when he returns to Toronto.

When: Monday, November 7 at 7 pm
Where: The Danforth Music Hall, 147 Danforth Ave.
Tickets: Available online at $25.

LA-based electronic pop band The Naked and Famous return, on tour to support their latest release Simple Forms which came out on October 14. The Kiwi band is known for their energetic concerts and massive sing-a-longs to their singles “Young Blood” and “Punching in a Dream.” So get ready to sing.

When: Tuesday, November 8 at 7:30 pm
Where: The Phoenix Concert Theatre, 410 Sherbourne Street
Tickets: Sold out online. Limited tickets may be available for purchase at the door just prior to the event. Cash sales only.

Norwegian dance-pop artist Mr. Little Jeans first broke into the music scene with her banging cover of Arcade Fire’s The Suburbs (aka one of the best covers you’ll ever hear). But when her album “Pocketknife” was released, she proved to be more than a one hit wonder.

Everybody. Rock your body. Because Nick Carter is back. That’s right. Everyone’s favourite blue-eyed Backstreet Boys member is back in our city as part of his All American Tour. Carter will be hitting up 11 Canadian cities this winter, and fans can expect to hear a collection of songs from his solo records along with some Backstreet Boys hits.

Chilean-American electronic producer Nicolas Jaar recently released his second studio album, Sirens. The young experimental composer founded a subscription based label, Other People, but stopped it recently in order to go on tour.

When: Thursday, November 10 at 7 pm
Where: The Danforth Music Hall, 147 Danforth Ave.
Tickets: Sold out.

OVO duo Majid Jordan are finally back home after a string of sold-out shows globally. Majid Jordan (composed of singer Majid Al Maskati and producer Jordan Ullman) released their self-titled debut LP earlier this year, the follow-up to their 2014 EP A Place Like This. And just like last most of their home shows, the first date (November 11) is sold-out, but tickets for their second date (November 10) are still available. Get it!

Toronto-based Dragonette’s latest release single “Lonely Heart” comes in advance of their upcoming album, Royal Blues, which is their fourth studio record. Their catchy pop sound has been consistent throughout their albums, since their 2007 release Galore. And with their upbeat tracks come an energetic show that is bound to electrify The Phoenix.

After his 2014 debut album, Worlds, Porter Robinson toured the world with his well-known live performances. This year, Robinson released “Shelter” which is a collab with friend and producer Madeon, and they are now on tour together.

When: Sunday, November 13 at 6 pm
Where: The Danforth Music Hall, 147 Danforth Ave.
Tickets: Sold out.

Neo soul legends Maxwell and Mary J. Blige are coming to Toronto as the only Canadian stop on the King and Queen of Hearts World Tour. Both making their names in the ’90s, Maxwell and Blige lead the wave of soul and R&B, and we get to experience this beautiful blast from the past.

James Vincent McMorrow is returning to Canada for a string of shows this month, kicking off here on the East Coast. Known for his gorgeous vocals, McMorrow has recently released his new album We Move.

When: Monday, November 14 at 7 pm
Where: The Phoenix Concert Theatre, 410 Sherbourne Street
Tickets: Sold out.

Korean pop star CL will be on a short North American tour this winter stopping in Toronto on November 14. The singer is on her “Hello Bitches Tour 2016” tour, and fans can get #Lifted with Korea’s “baddest female” as she makes history.

Hailing from the UK, London-based indie trio Daughter have recently released, Not To Disappear. This album is the follow up to the group’s widely acclaimed 2013 debut If You Leave. Be prepared for their mesmerizing live set.

Remember Simple Plan? The early 2000’s pop-punk French-Canadian band is back with a fifth studio album, and a new tour. Their album Taking One for the Team features rapper Nelly, and debuted as the number four album in Canadian Album Charts upon its release.

Since leaving the Barenaked Ladies back in 2005, Steven Page has released four studio albums, including this year’s release Heal Thyself Pt. 1: Instinct. He’s currently touring the record and his intimate evening featuring Craig Northey (Odds) and Kevin Fox rolls in this month.

They taught us “How to Save a Life” and then were “Over our Head,” and now The Fray are here to “Break your Plans.” Just kidding. But the Grammy-nominated band are back on the road since their 2014 album Helios.

It’s been a minute since the Irish indie rockers were in Toronto. The trio released their third album Gameshow in October, and it’s already topped the charts in the UK. Get ready to dance and make some “Bad Decisions.”

If it’s been a minute since Two Door Cinema Club has been in Toronto, then it’s been two minutes since David Gray has been here! The English singer-songwriter, who has been nominated for four Brit Awards, is touring the release of his The Best Of album.

The 90’s return with the Trans-Siberian Orchestra this month. The progressive rock band has eight studio albums, and are known for their series of Christmas rock operas. They have sold over 10 million concert tickets, and it’s all due to their extravagant concerts.

Toronto fave PartyNextDoor is home for back-to-back shows with Chicago producer/singer Jeremih. The first signee on OVO Sound label, PartyNextDoor has worked with artists like Drake (duh) but has also worked on Rhianna’s album Anti – including her hit “Work.” Check out this sexy double-bill this month.

When: Thursday, November 24 and Friday, November 25 at 8 pm
Where: Rebel, 11 Polson
Tickets: Although general admission tickets are sold out, limited VIP passes still available online from $180.

The Weeknd, The Chainsmokers, Alessia Cara, and Hedley are playing the inaugural iHeartRadio Jingle Ball on November 25. The massive concert coincides with the launch of the iHeartRadio streaming service in Canada, and resembles the successful concert series which takes place in the US. Toronto’s event will celebrate the holiday season with a line up that also includes Serena Ryder, Belly, Kardinal Offishall, and Kent Jones.

Melbourne, Australia the five-piece The Paper Kites have been making waves since releasing their EP Woodland back in 2011. With a second studio album, twelvefour, under their belt, The Paper Kites are now on a North American tour.

New York City rapper A$AP Ferg is bringing is Turnt & Burnt Tour to Toronto later this month. Ferg has been making waves since his album Always Strive And Prosper earlier this year, which features the hit single “New Level.” And as his name states, Ferg is a member of the hip hop collective A$AP Mob.

Danish producer/singer MØ has only released one studio album in 2014, but she’s been collaborating and on tour for the past two years. Her electro-pop artists collaborations include Major Lazer for “Lean On,” Elliphant for “One More,” and “Beg for it” with Iggy Azalea.

When: Tuesday, November 29 at 7 pm
Where: The Phoenix Concert Theatre, 410 Sherbourne Street
Tickets: Sold out online. Limited tickets may be available for purchase at the door just prior to the event. Cash sales only.

Multi-platinum, Grammy Award winning icon Stevie Nicks returns to Toronto for a concert as part of her 24 Karat Gold Tour with The Pretenders. As a member of Fleetwood Mac and as a solo artist, Nicks has had six top 10 albums and 8 Grammy nominations. She’s also the mother of all fairies.

Known for his crowdsurfing, beats, and rap style, Tory Lanez is one of the 6ix’s biggest music exports these days (just don’t tell Drake). His debut album, I Told You, was released on August 19 and he since began a massive four month tour – which brings him back home this month.

When: Wednesday, November 30 at 8 pm
Where: Rebel, 11 Polson Street
Tickets: Sold out.

Earlier this year, after writing a wealth of material in their Montreal studio, Halifax’s Wintersleep curated 11 new tracks and released their latest album, The Great Detachment. The indie rockers, known for their first hit single “Weightly Ghost,” are now on tour across North America.