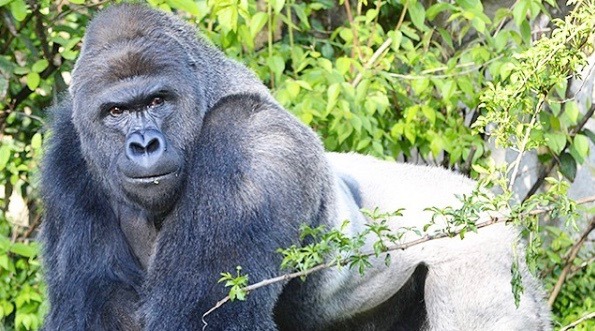 In this case, a 17-year-old Western lowland gorilla. Who you know to be Harambe, the 200 kg beast who was shot and killed at the Cincinnati Zoo earlier this year after a three-year-old boy fell into his enclosure and zoo workers worried for the boy’s life.

Except that Harambe has been reborn as an internet meme and now nearly 1,500 real life people are going to pay homage in a candlelight vigil.

If you’ve followed the rise of the Harambe story-turned-meme, you’ll understand why some might be confused. Is this a real vigil? Is it ironic? Did it start out as ironic and is now real – or vice versa?

It’s like when a hipster wears an outfit consisting entirely of denim, right down to the underwear. They’re so committed to the joke that you can’t tell if they’re in on it, the butt of it, or simply making a critical and well-cultivated statement on the role contemporary clothing plays in society’s cruel judgements (i.e. I am not the clothes I wear and I wear these clothes to remind you of that).

It’s all so goddamn meta these days.

Either way, hundreds and hundreds of people will be in on the joke this Thursday night at Ryerson’s Lake Devo (it’s the pond, in case you’re wondering).

Unless, of course, they are the joke.