Another day, and another report of the problems with Canada’s housing market.

For the second straight quarter, the CMHC reported that this trend is due to overvaluation and price acceleration in Canada’s housing markets.

While the assessment largely accounted for conditions in major cities like Toronto and Vancouver, the price growth continues to flow over to neighbouring cities like Hamilton and Victoria, according to the report.

“We continue to detect strong evidence of problematic conditions in Canada,” said CMHC chief economist Bob Dugan. “Price acceleration in Vancouver, Victoria, Toronto and Hamilton indicates that home price growth may be driven by speculation as it is outpacing what economic fundamentals like migration, employment and income can support. For this reason, home buyers should ensure that their purchases are aligned with their needs as well as the long-term market outlook.”

The report states that Canada saw house prices grow by 7 per cent year-over-year at the end of the third quarter of 2016 after adjusting for inflation, but if Ontario was removed from the calculation, housing prices would have remained flat across the country.

Along with CMHC’s report, the Royal Bank of Canada (RBC) released its January Canadian Housing Health Check which echoed the accelerated pricing growth in Toronto.

“Home resales set a new record high in 2016,” states RBC. “Prices continue to accelerate, with stronger gains registered in single-detached segments — which remain in short supply. Poor and rapidly eroding affordability is a main source of concern. The likelihood of policy intervention to address housing risks in Toronto is increasing.” 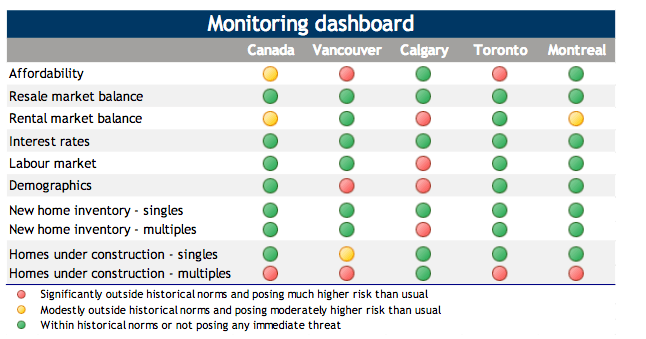 RBC calls Toronto a sellers’ market, with supply and demand conditions remaining very tight in the GTA. With that said, affordability in the region has been deteriorating since 2012.

This analysis of the CMHC’s quarterly Housing Market Assessment serves as an early warning system, alerting Canadians to areas of concern developing in our housing markets so that they may take action in a way that promotes market stability.

Here’s hoping someone is listening.