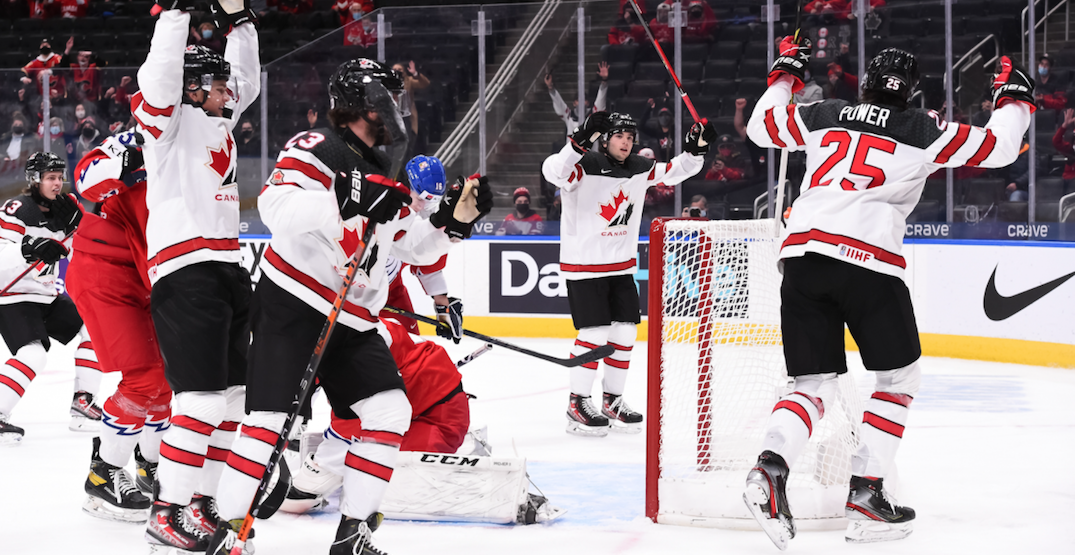 Owen Power made history and Canada secured a 6-3 victory in their opening game at the World Juniors in Edmonton.

After not having any adversity to speak of until the gold medal game at last year’s tournament, Canada was put to the test right away.

Following a spectacular first goal by Mason McTavish, Team Canada quickly found itself down 3-1 to Czechia (yes, that’s what their country is called now) with less than eight minutes remaining in the first period — but they didn’t panic.

“I wouldn’t say anyone was panicking… but I think we weren’t ready to play to start the game,” Power told reporters afterwards.

Instead, Team Canada head coach Dave Cameron called a timeout, and his players went to work. Power, the Buffalo Sabres first-overall pick from the 2021 NHL Draft, scored his first goal of the game 23 seconds later, and Donovan Sebrango netted Canada’s third goal in the final minute of the first period to tie the game up 3-3.

“We didn’t know what the hell to expect the first 10 minutes,” Cameron said post-game. “It was junior hockey at its finest.”

Canada ties it up at 3! pic.twitter.com/7N5RqqHATd

The turning point of the game came in the middle of the second period, when already shorthanded, the Czechs took two additional penalties on one shift.

Power scored his second and third goals of the game on ensuing five-on-three man advantages, becoming the first Canadian defenceman ever to score a hat trick at the World Juniors.

Canada outshot the Czechs 15-2 in the second period, and had a 36-17 advantage in shots overall.

Winnipeg Jets prospect Cole Perfetti had three assists in the game, while goaltender Dylan Garand picked up the win in net.

This year’s World Junior Championship is taking place in Edmonton and Red Deer, with 50% arena capacity due to rising cases of COVID-19, driven by the highly-infectious Omicron variant.

Canada gets tomorrow off, before back-to-back games against Austria and Germany on Tuesday and Wednesday.