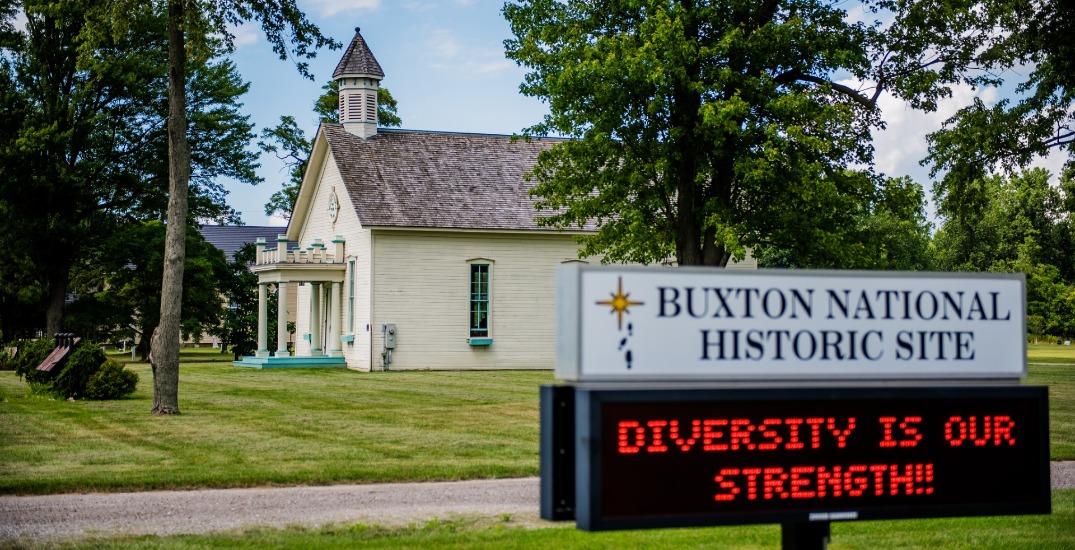 Nearly 300 kilometres west of Toronto, there’s a small, unassuming museum that stands full to bursting with memories from the Underground Railroad.

Buxton National Historic Site and Museum in Chatham, Ontario, is in fact so full of artifacts that the museum curator has had to turn people away when they come with their own. The museum was built to honour the Elgin Settlement, the largest planned Black settlement in Upper Canada, also known as Ontario.

Established in 1849 by abolitionist Reverend William King and 15 former slaves, 9,000 acres of land were divided into farmland, churches, homes, and more. As more and more refugee slaves arrived from the US, the settlement grew and became a vital point in Canadian history.

“There were so many people that really wanted to see this settlement grow, and it did,” Shannon Prince, curator at Buxton National Historic Site and Museum and descendant of members of the original settlement, told Daily Hive.

She said that Rev. King really reinforced the idea of building community, and that idea took hold. It was the community members, mostly refugee slaves, that cleared and built the settlement from the ground up.

Prince said that even though many in the community were on the run from slave owners, a large number of them kept all of their papers and documents on them. Now, many of those items are in the museum.

“When people arrived, there were a lot of original documents that they brought with them, believe it or not, so we have some great journals and diaries,” she said.

Much like the community grew over the years, so too has the museum. What started as a small space for descendants to view their family’s history quickly had additions added. They’ve hit a similar snag that the museum faced when it first opened.

“We are facing issues that they have faced back when the museum started in 1967,” said Prince. “We have an immense wealth of documents and artifacts, now where to put them?”

It’s made all the more difficult by descendants who still live in the area uncovering more documents and artifacts. This is why the museum has had to turn people away when they show up with documents from family members who were part of the original settlement.

While the museum’s size has made it difficult to house all of the documents and artifacts that have been found over the years, it does have some benefits to it. A community museum makes what’s inside the walls much more accessible. Want to read Rev. King’s diary? Just ask, and Prince will hand you the gloves, show you to the table, and you can read to your heart’s content. Not many museums can boast such hands-on history, and Prince said that visitors love it.

“The eyes just open, you know? We have Reverend King’s diary, so it’s really wonderful to be able to open it up and get an idea of what was happening in the settlement,” she said.

Even though they can’t take more documents and artifacts themselves, they’re helping the people who bring in their family history store it themselves. Prince said they would provide people with acid-free boxes and paper so they could at least preserve any documents themselves.

While some descendants have left the Chatham, Ontario, area as farming as a profession fell, they haven’t all left. Prince, her husband, and their children still farm in the area of the original settlement.

“There’s quite a few descendants that are still living here, even though we’re not as highly populated, we still have ties,” she said.

Canada needs to face its own history

While the museum is open to any and all visitors and even offers some virtual exhibits, Prince said there’s not near enough education about Canada’s history with slavery and treatment of Black and Indigenous people.

She said that Canada has an image of being warm and welcoming to refugee slaves seeking freedom here, but that’s not what she knows to be true.

“They didn’t feel very warm and fuzzy when they arrived here after coming to seek freedom,” Prince said.

“There was discrimination; our arms were not always open to helping Black people find freedom. Not to mention that a lot of white Canadians are clueless about more than a century of slavery in Canada.” Now, she says we’re heading back down a dangerous path.

More education is a step in the right direction, but she said people seem to just be ticking off diversity boxes and nodding along without absorbing information.

And it doesn’t start and stop with the month of February, she said.

Next year is a special year for the museum, they’ll be celebrating their 100th Buxton Homecoming. What started under a pear tree in an effort to call home many of the descendants who had moved to other parts of the country has blossomed into an annual pilgrimage each Labour Day weekend.

“The pear tree is still standing on my dad’s farm,” Prince said.

For the centennial, they’re hoping to be able to get seeds from the pear tree to give to everyone who attends. That way, they can take a bit of Buxton home with them, or plant their seed wherever they see fit.

She said that the small hamlet grows from about 150 people to about 3,000 during the homecoming. Prince hopes that by the time of the 100th reunion, COVID-19 will be a thing of the past and won’t disrupt their plans.

“People who have connections, ties to the museum, that’s when they return home, if you will, to reconnect, rekindle, honour those ones that have gone,” she said. “Now it’s so important for their children or grandchildren or great-grandchildren to know where they come from.”