Halton Regional Police say they have recovered one body from Lake Ontario after an impaired driver plunged into the lake early Monday morning.

According to police, on Monday, November 5 just after 3 am, Halton Police were called to the area of Maple Grove Drive and Lakeshore Road East in Oakville to investigate of a person knocking on doors.

Once officers arrived on scene they located a male and learned a collision had occurred that resulted in a vehicle entering Lake Ontario at the dead end of Maple Grove Drive.

Halton Regional Police Search Incident Response Team at the scene of collision on Maple Grove Dr. in Oakville. Area being searched to confirm if there were any other occupants of vehicle. ^ra
Media Officer On Scene

Following the collision, Halton Police arrested a person for impaired driving and police along with Oakville Fire continued with search and rescue efforts for any other possible occupants of the vehicle.

Just after noon on Monday Halton Police confirmed that search teams recovered a body from the shore of Lake Ontario in connection to the early morning collision.

Halton Police search teams have recovered one body from the shore of Lake Ontario. This search was in connection with this morning’s collision at the end of Maple Grove Dr. in Oakville. ^ra
Media officer on scene

Halton Police are reminding the public that driving under the influence of drugs and/or alcohol is a crime in progress and to call 9-1-1 immediately to report a suspected impaired driver. 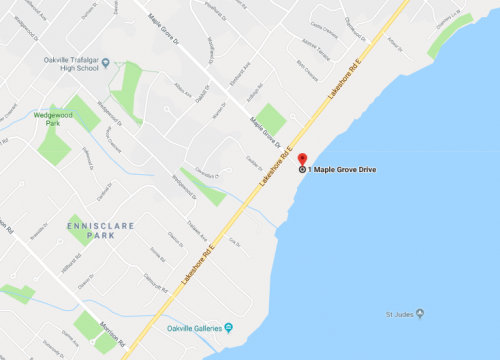