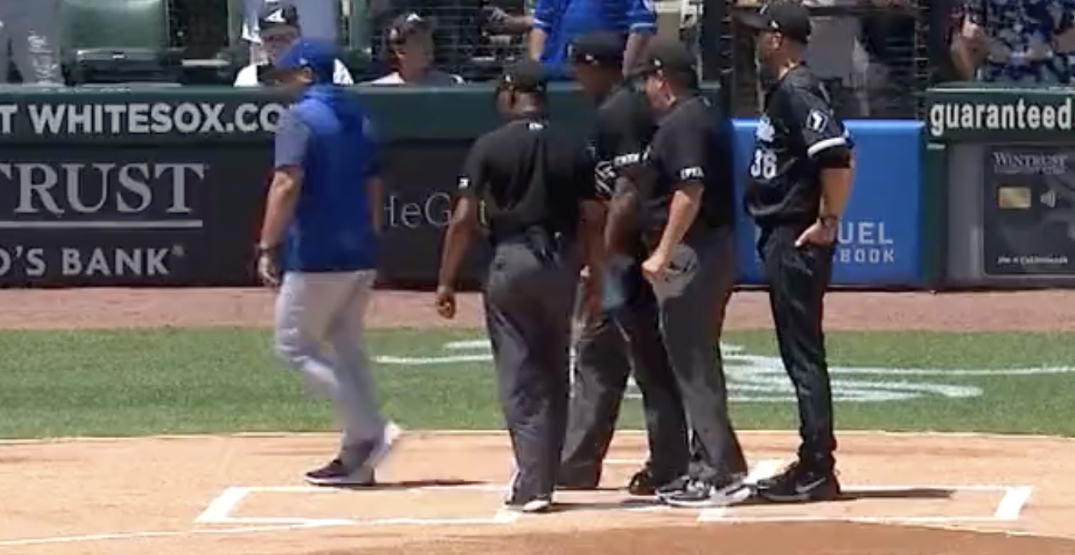 Toronto Blue Jays hitting coach Guillermo Martinez has been suspended five games by Major League Baseball after his pre-game ejection from a game against the Chicago White Sox on Wednesday.

His suspension, which is accompanied by an undisclosed fine, is for making contact with Umpire Doug Eddings and for unsportsmanlike conduct during the pregame lineup.

The suspension will start Friday night when the Blue Jays play the Milwaukee Brewers.

News: Toronto Blue Jays hitting coach Guillermo Martinez has received a five-game suspension and fine for making contact with umpire Doug Eddings during the pregame lineup card exchange prior to Wednesday’s game against the White Sox.

Martinez was tossed by first-base umpire Lance Barrett shortly thereafter he went up to home plate to exchange lineup cards prior to the game.

Only 24 managers or coaches have been ejected before the first pitch in MLB history.

Toronto was coming off a 7-6 extra-inning loss to the White Sox on Tuesday night that saw Eddings eject Blue Jays pitching coach Pete Walker late in Tuesday’s game. The Blue Jays held leads in each of the ninth, 10th, and 11th innings, but couldn’t hold on for the win.

The Umpire Scorecards Twitter account, which tracks umpire performance, states that the official’s calls swung the game by two runs in favour of the host White Sox. According to the account, Eddings had a called strike accuracy rate of just 64%.

Umpire Scorecards also noted Eddings’ run impact of 5.89 is the fifth-highest in their history, and the most among any MLB game this season.

Martinez has worked as a coach in the Blue Jays organization since 2012.