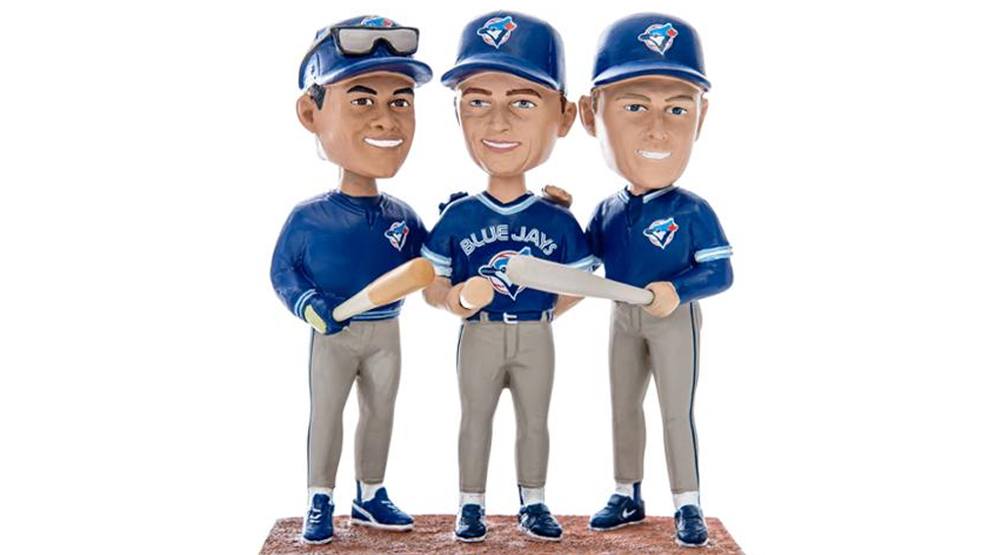 This Saturday, the Toronto Blue Jays celebrate the 25th anniversary of their 1992 and 1993 World Series championships. Legends aplenty will be on hand for the festivities at Rogers Centre as the club honours some of its most iconic players in franchise history.

Three of the most impactful players from that group: Roberto Alomar, Paul Molitor, and John Olerud. Now, the trio is immortalized in bobblehead form; a pose based off one of the Blue Jays’ most iconic photos from the 1993 season.

The trio comprised three-fifths of the Blue Jays’ WAMCO lineup in 1993, which went as follows: White, Alomar, Molitor, Carter, Olerud. The 1993 Blue Jays were baseball’s most potent offence, hitting .279 as a team that year. Alomar, Molitor and Olerud were three pillars in that domineering lineup.

Next Saturday will mark 25 years since our back-to-back World Series. You don't want to miss this historical bobblehead giveaway.

The first 20,000 Blue Jays fans through the turnstiles this Saturday receive this triple bobblehead of Alomar, Molitor, and Olerud. Props to whoever designed it for historical accuracy, as Alomar and Olerud are wearing their warmup jerseys, while Molitor has his game jersey on. The sunglasses atop Alomar’s cap and his signature Franklin batting gloves are a nice touch, too.

Not only will fans receive this unique keepsake, there will also be a pre-game ceremony to honour members of the 1992-1993 World Series teams.

We’ll be celebrating our 25-Year Anniversary Back-To-Back World Series on Aug. 11th with our legendary alumni from the ’92 and ’93 rosters!

You’re not going to want to miss this historical day. https://t.co/VpKQ8wT1OT pic.twitter.com/zFVGxmqrux

Blue Jays alumni will be on hand during the game for autographs on the WestJet Flight Deck. The Blue Jays face the Tampa Bay Rays this Saturday with first pitch at 4:07pm ET.