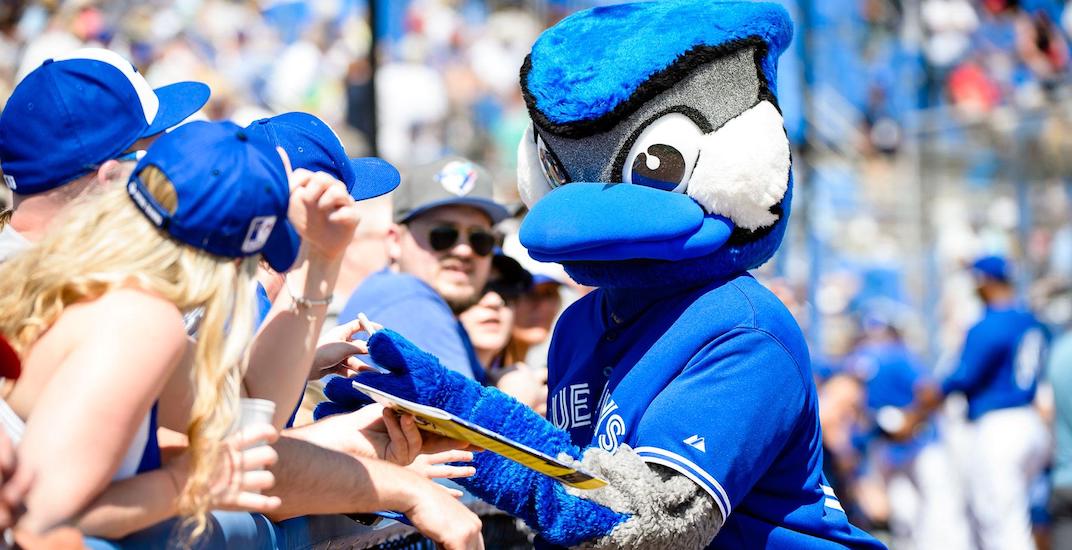 Approximately 87 years ago in the ‘before times’, the Toronto Blue Jays released the team’s new powder blue uniforms to much fanfare at this year’s Winterfest event. Which, a quick check tells me was somehow actually the weekend of January 18.

Love them or hate them, the uniforms hearken back the original baby blues of the team’s first seasons. And it gets one to thinking — maybe it’s time for the mascot to go retro? An Ace modelled after the original rapscallion bird that entertained fans.

Younger fans might not remember; but before there was Ace, there was ‘BJ Birdy.’ BJ was added to the roster in 1979, the same year that the Montreal Expos debuted Youppi, a wild orange proto-Gritty (incidentally both the first mascot to be thrown out of a game and switch sports, from MLB to NHL with the Montreal Canadiens).

If the Jays are embracing the past with the new uniforms, why not with the mascot too? An Ace with a bit of scrap and swag. The current Jays team (when we see them again) is made up of five sons of former major leaguers. Maybe Ace can be the next generation of BJ Birdy.

When the Jays are finally back in the SkyDome, and it’s safe to gather as a crowd again, the return of baseball is going to be a lifeline for so many people.

And just like the rest of us, Ace is going to need to scrape some of the rust off after we emerge from this quarantine. The mascot last underwent a slight retooling in 2012, but this would be the perfect time for a makeover.

Mascots had been steadily gaining popularity in MLB after the debut of Mr. Met in 1962. The prevailing belief was that a loud, animal-like character would provide entertainment to children bored at long games.

It was suggested to Kevin Shanahan; then an Ontario Place employee who had already conveniently designed a bird costume, that the Jays might be interested in a mascot. And from these humble beginnings, BJ Birdy was born. Shanahan would be the only person to ever perform as BJ until the bird was permanently shelved in 1999.

BJ was unpredictable, improvising many of his routines and frequently running afoul of Jays management, who were reluctant to claim him. He would comment to local media as ‘BJ’ about team matters like ticket prices, and in 1985 even briefly had a comic strip in the Toronto Star, which was often critical of the front office.

Not every fan was enamoured with him either, with many finding his antics over-the-top and embarrassing. He either tarnished or burnished his legend, (depending on who you ask) when he was ejected from a game in May, 1993.

Typically, a mascot doesn’t get ejected from a game. And even more typically *nobody* gets ejected for arguing a call that goes for your team.

But BJ Birdy, misinterpreting a call that umpire Jim McKean made on a Roberto Alomar line drive (correctly ruled a ‘no catch’) riled the crowd of 50K+ against the ump. And so it was Bye Bye Birdy (writer’s note: my apologies).

By 1999, with the Jays attendance and performance in a free fall, the team decided to create their own mascot. Shanahan offered to sell the costume and naming rights to the team, who turned him down. He in turn refused their offer to donate them to the Jays Care Foundation. And so this time it was truly Bye Bye Birdy (writer’s note: apologies again).

The replacement of BJ Birdy with the two new mascots was met with great consternation by many Jays fans; in typical Toronto fashion of not caring about something until it’s taken away, and then deciding it was actually beloved.

Originally named ‘Slider and Curveball,’ the team eventually held a naming contest after much push back and Ace and Diamond were unveiled in March, 2000 — the winning names coming from a Toronto high school student.

The new birds were given features designed to represent their respective genders and were modelled after Jim Carrey and Goldie Hawn, apparently in homage to the actors’ ‘wild and zany’ sides. Hopefully, the next iteration of the mascot can simply identify as a bird of no specific gender.

Diamond didn’t make it to the 2004 season, presumably because there wasn’t much of a need for two full-time mascots. Ace is now the sole mascot, but is joined on weekends by ‘Junior’, a ‘child’ mascot for the Junior Jays games.

There’s an interesting psychology to a mascot. The word originates from a French term literally meaning to ‘bring good luck’. They become emblematic of a team. Adults know that it’s a performer in costume, yet somehow they develop their own brand of fame. You’ll see just as many grown-ups clamouring to take a photo with a sports mascot as you do kids.

For the truly remarkable mascots, like the Raptor, Phillie Phanatic and more recently Gritty — they become characters with a life and legend all their own.

“As a player, you don’t really pay full attention to what they’re doing, you can’t,” he says. “But you notice how they engage the fans, and we feed off that. Players need the crowd. I know I definitely appreciated when he was able to get people going when they were quiet. And it’s always kind of fun to watch him now on the dugout between innings.”

But as polished and hard-working as Ace is, for those of us old enough to remember him, there’s a nostalgia for BJ Birdy, with his homemade costume and defiance to authority. He was rough around the edges, a self-described ‘underbird’ – perfect for a Jays team that’s hopefully beginning to be competitive after rebuilding for so many seasons.