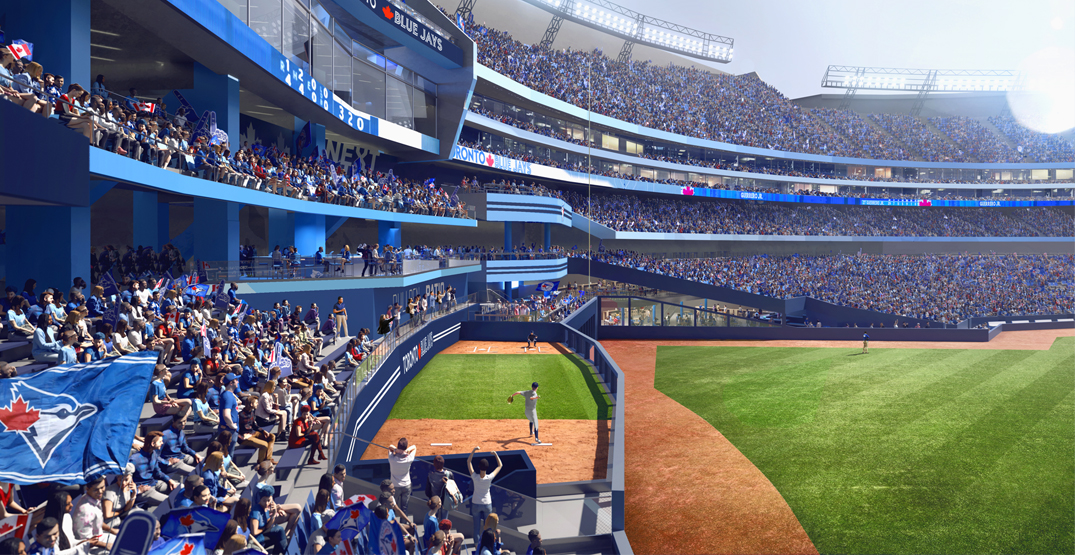 After 34 years, Rogers Centre will get the biggest facelift it’s ever seen since opening to the public in June 1989.

The Toronto Blue Jays announced a $300 million multi-phase renovation yesterday, which will see the entire interior remodelled over the next few years.

They’ve done some minor tweaks in recent years, but these renos represent the first large-scale change at Rogers Centre since the stadium’s inception. The seventh-oldest stadium in Major League Baseball will have a huge facelift prior to the 2023 season.

Some changes are fan-facing, some of them aren’t; there’s a new weight room and family area being constructed which will mostly affect the players, but the fan-facing changes are among the most drastic for Rogers Centre.

This is phase one of the upcoming changes for the Blue Jays’ home nest, with many more specifics still to be announced in the future. These changes are focused primarily in the 100, 200 and 500 Level sections (the entire back of the stadium, which houses the video board).

These are the three most dramatic changes Blue Jays fans will notice when they visit Rogers Centre starting next season. 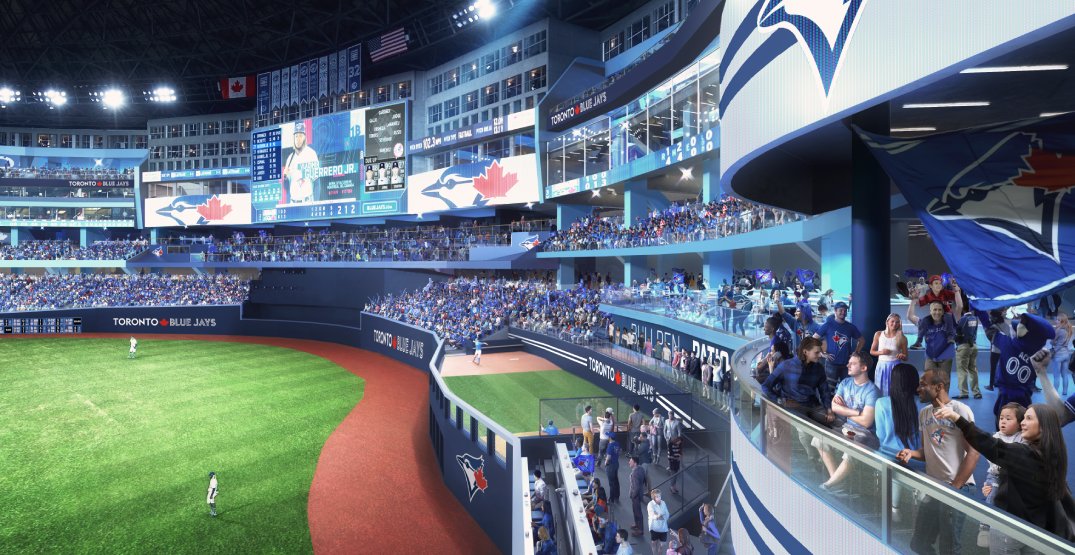 The most stark difference for fans on Opening Day 2023 will be the revamped 500 Level outfield section. The seats are being ripped out entirely and being replaced with non-ticketed sections, similar to the WestJet Flight Deck on the 200 Level.

Basically, anything on the 500 Level from foul pole to foul pole is being replaced by giant common areas. The Blue Jays took inspiration from Coors Field’s upper deck patio area, where they blew out rows of seats and replaced them with bars, restaurants, and standing areas.

At Rogers Centre, there will be bar rails, high tops and tables in the 500 Level outfield seats, providing a unique perspective on the game. The aim is for these areas to mimic a rooftop patio, with the Blue Jays game as the backdrop.

These seats are typically the last to fill up at the Rogers Centre anyway, so it makes sense to bring some life to this under-utilized sector of the ballpark. Regardless of where your ticket is, anyone can hang out in these new 500 Level sections.

Say so long to these 500 Level Skydome seats, they'll be replaced as of next year. pic.twitter.com/nGkdLqnJwV

On the surface, this may not seem like a big deal, but some seats at Rogers Centre are original when the building opened in 1989. In fact, on the exterior of certain rows, you can still see the original SkyDome logo on the seats.

Not any longer, as of the 2023 season. All 500 Level Seats will be replaced with larger, more comfortable seats, according to Blue Jays President Mark Shapiro. As anyone who’s sat in a crammed airline seat before, more legroom is always a good thing, and it’s a welcome addition to the Rogers Centre.

The Blue Jays will begin by replacing all seats in the 500 Level for the first phase or the renovation, and will presumably replace the 100 and 200 Level seats in future phases. And yes, these seats will also be angled to face home plate. No more cricked necks, Jays fans!

All we have is one request for the new seats; cup holders in front of each seat, please. Is that too much to ask?

3. Raised home and away bullpens

As currently constructed at Rogers Centre, unless you’re sitting in the 100 or 200 Level outfield, it’s difficult to tell what action (if any) is going on in the bullpen. One of the key features of this new renovation will be the elevated bullpens.

It’s a big feature of modern ballparks around MLB where fans are basically right on top and beside the bullpens. It gives a very “in the action” feel and allows fans to get closer to Blue Jays players.

Another neat feature about the bullpen modifications is it will impact the outfield wall alignment. If you look closely at the new outfield dimensions, this means the wall will bow out a bit, as opposed to the typical semicircle shape. 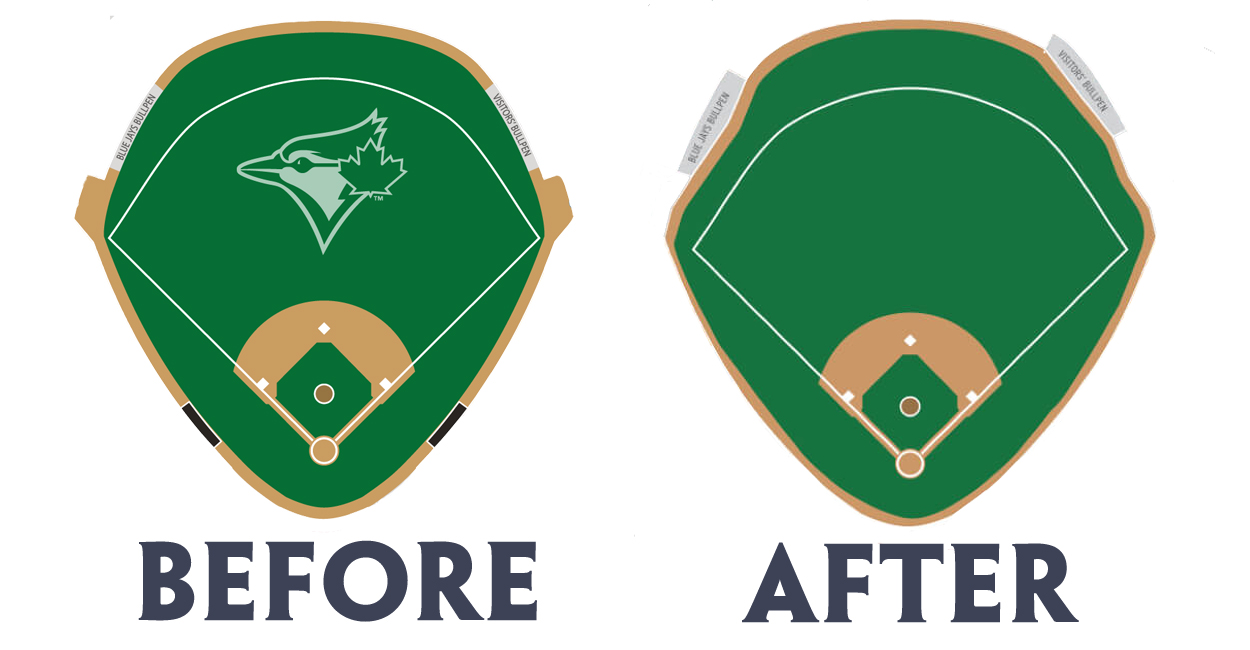 Shapiro didn’t reveal the exact dimensions of the angles and the height of the outfield walls, but expect it to be a much more asymmetrical design than before.

It should make for some interesting plays at the outfield wall, and it’ll be interesting to see how the baseball plays off these curved out walls at Rogers Centre beginning next season.

Not as drastic as what the Baltimore Orioles did with their left field wall at Camden Yards this past year, if anything, this new outfield alignment could lend to more home runs at Rogers Centre, since the bullpens appear to take up a bit more real estate than before.

Another benefit of this new configuration is it means the 100 Level outfield seats will go all the way up to the outfield wall. Right now, there’s a giant chasm between the edge of play and the first row of fans.

With this new design, home runs will go into the hands and gloves of fans, instead of dropping into the “abyss” as Shapiro referred to it.