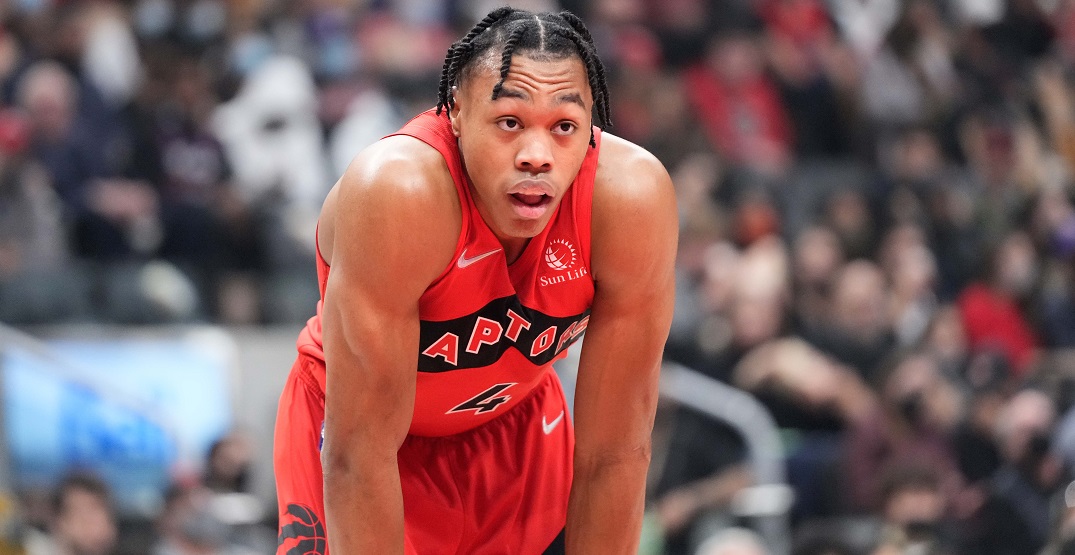 Toronto Raptors rookie Scottie Barnes has been nothing short of sensational in his first year in the NBA.

Averaging 14.7 points, 3.5 assists, 8.0 rebounds, 1.0 steals, and 0.9 blocks per game, Barnes has blown through early expectations after being selected fourth overall in the 2021 draft.

Barnes generated Rookie of the Year hype within his first week in the league, dropping 25 points in a road win over Boston in just his second game of the year.

Since then, he’s been a consistent performer hitting double-digit point totals in all but four games this year.

When it comes to Barnes’ competition for the first-year player award, nine other rookies across the league have started at least 25 games this season.

Breaking down their stats in traditional categories, win shares, and true shooting percentage, we can see how Barnes stacks up against his rookie counterparts.

A few takeaways: no head coach is using their star rookie quite as much as Nick Nurse uses Barnes, lining up with his preseason assessment that the youngster’s role in Toronto “would be huge.”

Wagner, who leads all rookies in scoring, has seen his high-scoring nights over the last month become commonplace: he’s averaging 18.9 points per game since December 11. A 38-point performance against the Milwaukee Bucks in late December vaulted his name to new heights.

Mobley, meanwhile, has instantly become one of the game’s better rebounders, though Barnes is averaging nearly similar numbers to him on the glass.

But winning, as we know, can also have an impact on the standard voters’ mindset. Mobley’s Cavaliers are in sixth place in the Eastern Conference, one game up on Barnes’ Raptors, who sit in seventh.

Meanwhile, Wagner’s Magic sit 15th in the East, one spot below first-overall pick Cade Cunningham’s Pistons in 14th. Sure, it might not be fair to expect a first-year player to lead their team to the playoffs, but it is one factor that could play into Barnes’ favour when it comes time for the award voting.

There are still 45 games left to be played in the Raptors’ season, with Barnes definitely needing a strong second half if he’s looking to secure the Rookie of the Year award.

He’ll also have to stay healthy: Barnes has been dealing with a right knee issue that has him questionable against Phoenix tonight, though it’s not believed to be a long-term problem.

But while he might still have work to do to establish his name as a clear favourite, Barnes will have plenty of chances to prove himself as the Raptors look to climb up the standings.