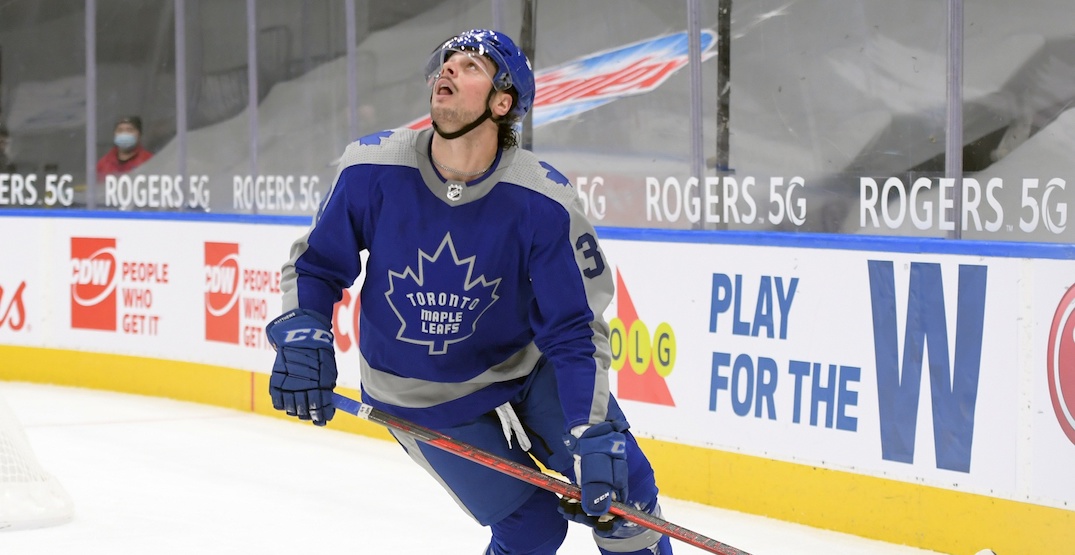 The Toronto Maple Leafs star will be looking to extend his career-best goal streak when the Leafs battle the Montreal Canadiens tonight.

Matthews has scored a goal in each of his previous eight games. Only two players have scored more in consecutive games since 1996: Teemu Selanne and Jaromir Jagr.

Auston Matthews extended his goal streak to seven games and has found the back of the net in each of his last eight appearances.

Only two players in the last 25 years have had a longer run of consecutive games played with a goal. #NHLStats pic.twitter.com/X8wAXTFp0m

Matthews needs a goal tonight to tie Jagr, and just three more goals to tie Selanne. If he does that, Matthews would also become the Leafs all-time holder for most goals scored in consecutive games surpassing Babe Dye with 11.

In league history, the all-time holder is Punch Broadbent who scored in 16 straight games in 1921 through 1922.

Almost 100 years later in 2021, Matthews is building upon his own exceptional goal-scoring prowess from last season. He currently leads the NHL in goals with 11, two more than the second place holder, and dating back to last year, Matthews’ has recorded 58 goals in the past 82 regular-season games.

He is doing it in style as well:

“Auston has been on a mission for a while,” Matthews’ teammate Jason Spezza told reporters. “Even in the bubble, we didn’t have success as a team, but he elevated his play… He’s a special player, and he’s putting together an MVP-type season.”

Matthews is no stranger to NHL records as in his very first game in 2017; he put up a rookie-record four goal debut against the Ottawa Senators.

“I just try to keep the same mindset whether the puck is going in or not, every time I shoot it,” Matthews said. “I just believe the next one is going to go in.”

Matthews also recently made more history as he tied Charlie Conacher for the second-fastest player in Maple Leafs history to record 300 points. Matthews and Conacher did it in 294 games while the franchise leader, Syl Apps, did it in 284 games.

Among players to debut with the @MapleLeafs, @AM34 tied Charlie Conacher (294 GP) for the second-fewest games to collect his 300th career NHL point. The only player to do so in fewer: Syl Apps (284 GP). #NHLStats https://t.co/euRQEhK0XE

“He’s certainly special and unique. A unique talent,” Leafs coach Sheldon Keefe said after a win against the Vancouver Canucks on Saturday. “He does surprise me still, yet you just expect something special because he’s capable of that and watching him in practice every day is a pleasure.”

Puck drop for tonight’s game against the Canadiens is at 7:30 pm ET on Sportsnet.