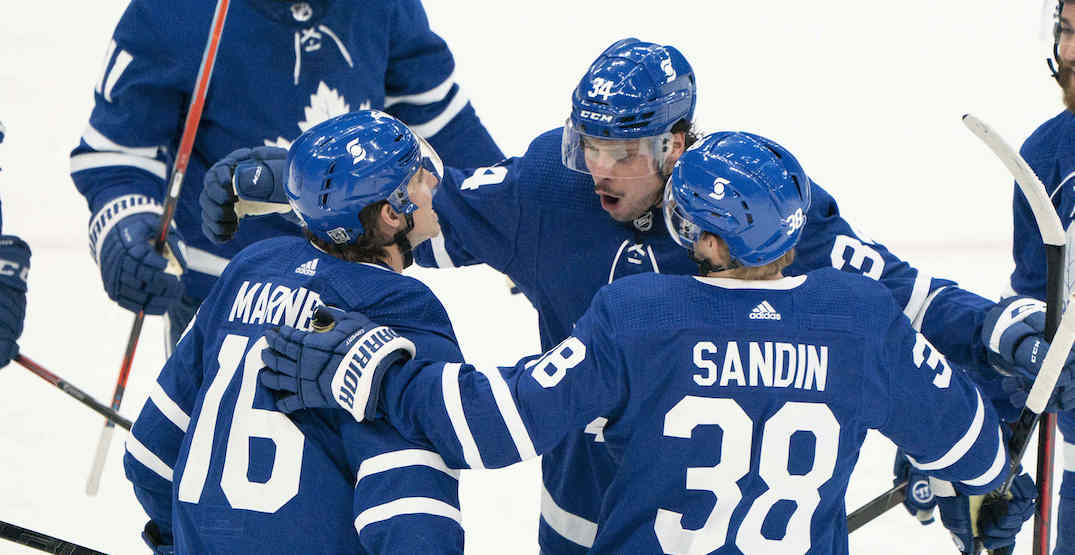 The Toronto Maple Leafs strong play has made them the favourite according to one analytics website.

According to MoneyPuck.com, the Leafs are now the favourite to win the Stanley Cup. The site gives Toronto a 7.8% chance to hoist Lord Stanley’s mug followed by the Montreal Canadiens (6.5%), and the Tampa Bay Lightning (6.4%).

Money Puck also gives the Maple Leafs a 95.4% chance to make the playoffs and project the team to get 74 points this season.

The website focuses on a variety of analytical factors to determine probabilities, so typical season records do not hold as much weight. That is why, for example, the 8-1-2 Boston Bruins are currently behind the 8-2-2 Montreal Canadiens in terms of a percentage chance of winning the Cup.

The Leafs are certainly riding high after the team beat the Vancouver Canucks 3-1 last night to complete a three-game series sweep. They seemingly scored at will, which was apparent in the fact that the goal differential for the series was 15-5 for Toronto.

In many team categories, the Leafs are performing extraordinarily. They are second in goals scored per game (3.69) while also top 10 in goals-against per game (2.62).

Toronto is being led by outstanding campaigns from Auston Matthews and Mitch Marner, who are both near the top of the league in different statistical scoring categories. Matthews is first in goals with 11 and Marner is third in points with 21 in 13 games. The two other core four members are also performing well with William Nylander and John Tavares in the top 30 in the league in points with 12 each.

Other notable teams at the top of Money Puck’s rankings included the Carolina Hurricanes (6.4%), Colorado Avalanche (6%), Vegas Golden Knights (5.9%), and the Boston Bruins (5.9%). Only three Canadian teams, the Leafs, Canadiens, and Oilers, were given over a 5% chance to win the Cup.

The Maple Leafs’ next game is a challenge as they go to Montreal to face the Canadiens on Wednesday. Puck-drop is at 7:30 pm ET on Sportsnet.