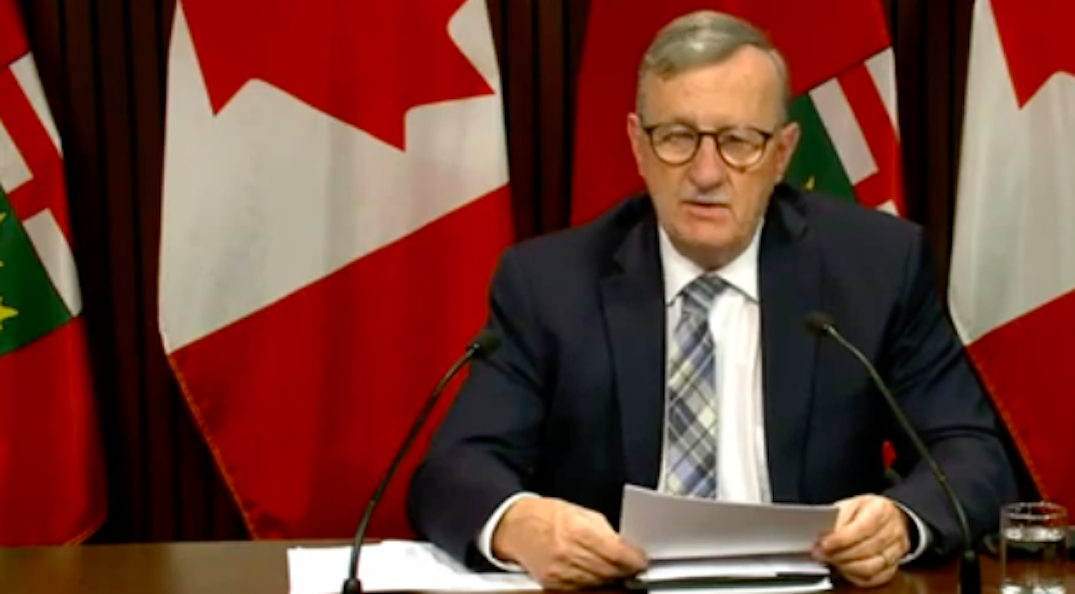 In a new report by the Auditor General on Ontario’s COVID-19 response, the Chief Medical Officer Dr. David Williams is heavily criticized for not sufficiently leading the province during the pandemic.

On Wednesday, the report Auditor General Special Report: Ontario’s COVID-19 Response Faced Systemic Issues and Delays took issue with the government’s response to the pandemic calling it, “slower and more reactive relative to other provinces,” especially when it came to emergency management and pandemic response, outbreak planning and decision-making, laboratory testing, case management, and contact tracing.

A significant part of the report, by Bonnie Lysyk and other auditors, focused on Williams and his proposed failings.

The Auditor General said that the lack of leadership is partly a result of Ontario’s COVID-19 response structure, which included a Health Command Table “that took on an increasingly complex structure during the pandemic and had grown from 21 members to 83 participants by August.”

It was only in mid-July that videoconferences took place — previously, it was teleconference only — but there wasn’t adequate documentation of the discussions that took place.

Now, more than 500 people are involved in the Health Command Table.

Lysyk said Williams was not technically in charge of the Command Table and could not command or make any decisions without a sign-off by the Ford cabinet.

The report also noted that Williams did not issue directives to local Medical Officers of Health to ensure public health units responded consistently to the pandemic.

“In May 2020, 34 local Medical Officers of Health jointly prepared and signed a document stating there needed to be more direction and regional consistency,” it said.

Additionally, the auditors also found that Williams and his team were denying the possibility of community transmission of the virus by March 25, even though hospitals were reporting transmission as of March 14 and Public Health Ontario was as of March 15.

This lack of proactive decision-making lead to a problem with testing efforts at the start of the pandemic.

An Associate Medical Officer of Health at one of the public health units emailed Williams on March 18, indicating the requirement of long-term-care home workers to wear masks as an urgent priority.

However, the report noted that the requirement was not implemented province-wide until three weeks later, on April 8. At that time, 69 long-term-care homes had outbreaks involving 857 cases and 88 deaths.

“The Chief Medical Officer of Health did not take a sufficient leadership role in response to COVID-19,” the report said.

The NDP responded to the report calling Ford responsible “for putting us in longer and deeper shutdowns.”

“He stood up every day at 1 p.m. and lied. He told us that the decisions — often confusing and contradictory — were being led by health experts. They weren’t,” said NDP Deputy Leader Sara Singh, in a statement.

As a government, we expect to be, and should be, held accountable for our actions and performance, especially in a crisis. However, today’s Auditor General report is in many respects a mischaracterization of the province’s pandemic response.

Earlier this week, the Ford government did not get unanimous support to extend Williams’ time in office by an additional seven months.

The NDP disagreed with the Ford government’s proposal and called for a non-partisan discussion about the government’s plan to re-appoint Williams. The Official Opposition would not provide unanimous consent to allow this decision to be made.

This means the decision will now come down to a vote.