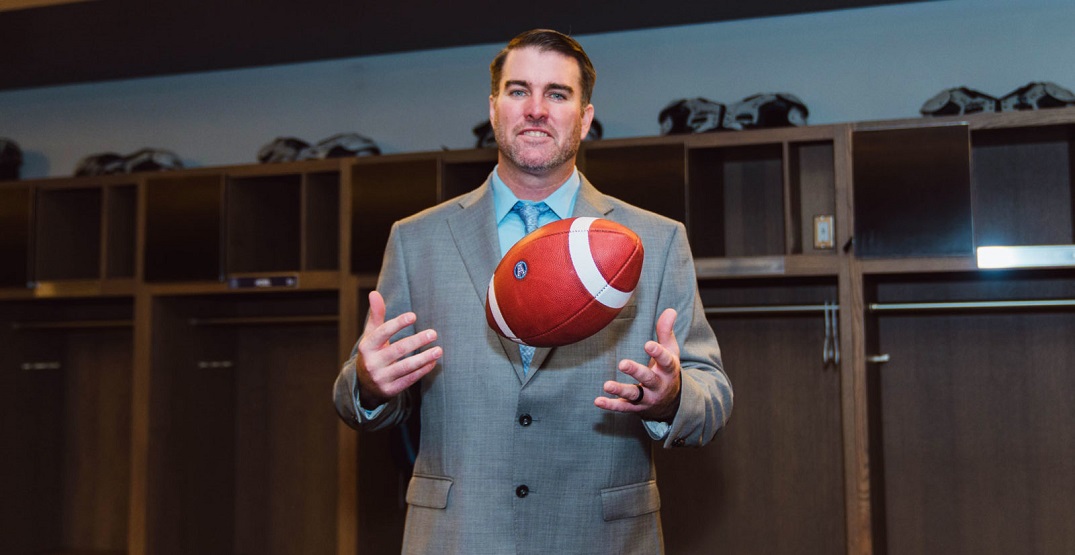 “I sleep about five, five and a half hours during the season,” Dinwiddie said in an interview with Daily Hive.

Dinwiddie added that he’s in bed around midnight and up around 5:30 a.m each morning.

“I’m always anxious and nervous each day about [what] we need to do to be successful,” he said.

But Dinwiddie’s now dealing with an unexpected early-season “bye week,” with the coaching staff still working but the players off from practicing until the weekend.

This week’s Argonauts home game — scheduled for Thursday night — was postponed after numerous Edmonton Elks members tested positive for COVID-19, with 11 cases confirmed so far. In an interview, CFL commissioner Randy Ambrosie told TSN that the “majority” of cases were amongst unvaccinated players but wouldn’t specify on numbers.

“My mind went directly to the [Argonauts] players,” Dinwiddie said about finding out about the news of the game’s postponement this past Sunday night. “How are these guys feeling? What are their questions? So we brought a team meeting together and let those guys kind of have the floor.”

Cue the 2-1, first-place-in-the-East Argos suddenly no longer prepping for a short week after winning their home opener over the Winnipeg Blue Bombers last Saturday.

“It was eye-opening for us that we have to probably do our best as well to make sure we keep COVID out of our locker room,” Dinwiddie added.

Despite the Argos’ early success, Dinwiddie said it’s important that the Argos can’t get complacent.

“We can’t buy into too much of the hype that we’re 2-1 and this great team all of a sudden,” Dinwiddie said. “We got to get better, but we showed flashes that this can be a great team. I know we have we had a long way to go. But I think we’re going down the right road.”

The Argonauts now look ahead to a Labour Day Classic matchup in Hamilton on Monday, September 6. It is still unclear whether the Elks’ outbreak will result in a 1-0 forfeit and win for Toronto, or the game will be able to be rescheduled to later in the season. Argos players were also unsure if a forfeiture would still see them paid a weekly game cheque.

The CFL’s policy states that teams will be paid game cheques if a game is cancelled if 85% of a team’s players are at least partially vaccinated, but the entire team will not be paid if the roster falls below the 85% threshold.

“I know the players were concerned about getting paid,” Dinwiddie said. “They want to play football.”

The CFL announced at the beginning of the season that three of the league’s nine teams had hit the 85% threshold but did not specify which organizations. Neither the Elks nor the Argos has publicized their percentage of vaccinated players.

Hired after the 2019 campaign to take the reins with the Argos after seven years of working in the Montreal and Calgary organizations, Dinwiddie’s relishing the opportunity to be a head coach for the first time.

Dinwiddie first began watching the CFL in the early 90s growing up in Elk Grove, California. The nearby Sacramento Gold Miners played for two seasons before the CFL shut down their American expansion.

“I went to all their games when I was a young kid,” Dinwiddie said.

Dinwiddie’s own playing days took him through a career as a three-year starting QB at Boise State, before stints with the Chicago Bears and NFL Europe’s Hamburg Sea Devils, eventually saw him move to the Winnipeg Blue Bombers as a backup in 2006.

Diehard CFL fans might remember Dinwiddie suddenly being thrust into the spotlight in Toronto for the 2007 Grey Cup with the Bombers at the Rogers Centre, following star quarterback Kevin Glenn’s injury in the fourth quarter of the East Division Final.

“Once you get up here, you kind of fall in love with [Canadian football rules],” Dinwiddie said.”

While Dinwiddie ended up losing that game 23-19, he said it was still a fond memory despite the loss.

“I actually still have one of the Grey Cup game balls,” he said. “I was putting that up the other day in my trophy case.”

Retiring in 2012, getting into coaching in 2013 with the Alouettes, his first game as head coach, coming a year later than expected due to a 2020 season cancellation.

It’s clear that one of the reasons Dinwiddie was brought in was to emulate a culture he helped create as the Stampeders’ quarterbacks coach.

Under Dinwiddie, Calgary QB Bo Levi Mitchell earned the league’s Most Outstanding Player award (the CFL’s version of an MVP) in both the 2016 and 2018 seasons. The team advanced to the Grey Cup three years in a row from 2016-18, finally winning it all in 2018.

Toronto hasn’t exactly had the same success as Dinwiddie’s last club —  in the regular season, at least.

One such example of Dinwiddie’s influence was the team using simulated crowd noise in practice for the first time, a standard practice with the Stampeders and many other football organizations before heading into tough away markets.

“It’s easy to say ‘well, we’ve never done that before,'” Dinwiddie said of what he heard when he first brought up the idea to some of the team’s more long-standing staff members. “Well, 4-14… that’s not a good example [to follow].”

Dinwiddie also said that having former running back Michael “Pinball” Clemons as Argonauts GM helps “tremendously” as the team looks to build its rapport back in the Toronto community.

“I couldn’t ask for anybody better to be working under and learning from,” Dinwiddie said.