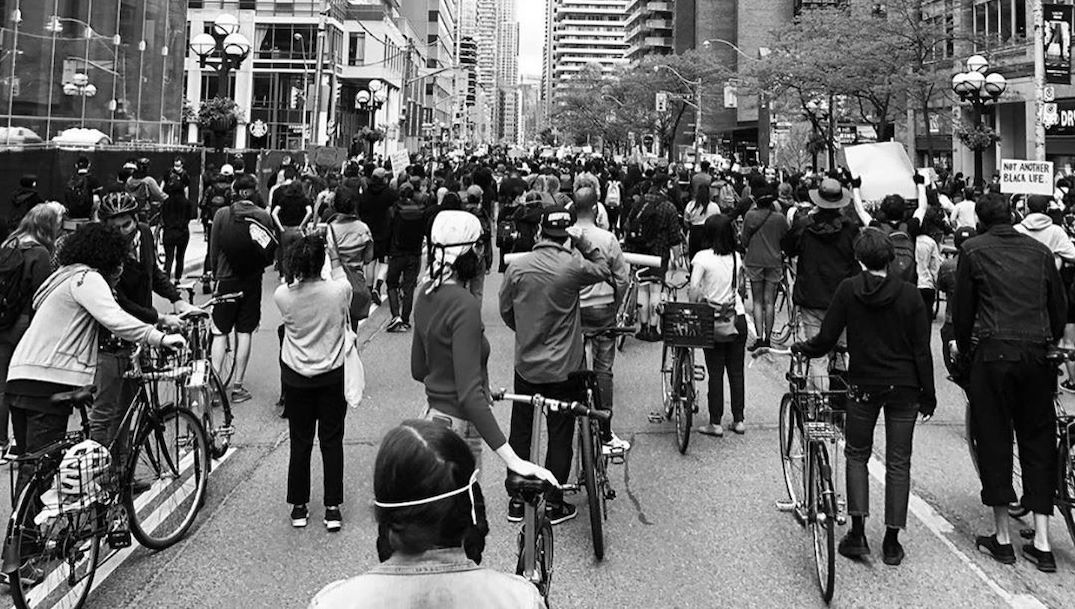 Justice for Regis march on May 30. (@notanotherblacklife/Instagram)

Following this weekend’s march for Regis Korchinski-Paquet, Tory addressed the issue of racism in the city.

“We are not immune from issues here,” said Tory during Monday’s COVID-19 press conference.

Tory said it is important to acknowledge the racism, adding “you have to be honest exiting problem if you want to meaningfully address it.”

The mayor also addressed what is happening south of the border.

“While we are shocked at what we see happening in the United States, we must acknowledge that we are not immune from some of those very same issues here,” said Tory.

“Anti-Black racism does exist in our city and in our country,” Tory said over the weekend, and repeated his words on Monday.

Today’s march indicates a genuine desire of people to be heard on these issues. Current events, particularly in the U.S., will cause some people to feel hopeless and think we should give up. Please do not give up. We must all remain committed to Toronto’s values.

“Thousands of people marched peacefully in our city to register a total rejection of anti-Black and anti-Indigenous racism. This is a cause shared by all of us and the answer to the march will come through our collective actions to combat this racism,” he said.

Tory also said the march indicates a genuine desire of people to be heard on these issues.

“Current events, particularly in the US, will cause some people to feel hopeless and think we should give up. Please do not give up. We must all remain committed to Toronto’s values,” said Tory.

“The fight for justice and equality and the fight against racism and discrimination is one all Torontonians support. So now, we must step up our efforts and renew our dedication to this cause like never before.”

Last week, Toronto resident Regis Korchinski-Paquet reportedly fell to her death out of the 24th floor of a High Park apartment. Ontario’s police watchdog is investigating the incident after her family raised questions about whether officers’ actions contributed to her death.

The weekend’s march was organized by Not Another Black Life.

“Racism and hatred has no place in our province,” Ford said.

“There is no tolerance for anyone targeting the Black community and any minority group.”

“For far too many Canadians, the images and stories out of the United States are all too familiar,” he said. “As a country, we can’t pretend racism doesn’t exist here. Anti-Black racism is real. Unconscious bias is real. Systemic discrimination is real. And they happen here in Canada.”

Trudeau added that anti-Black racism is a lived reality for millions of Canadians every day.