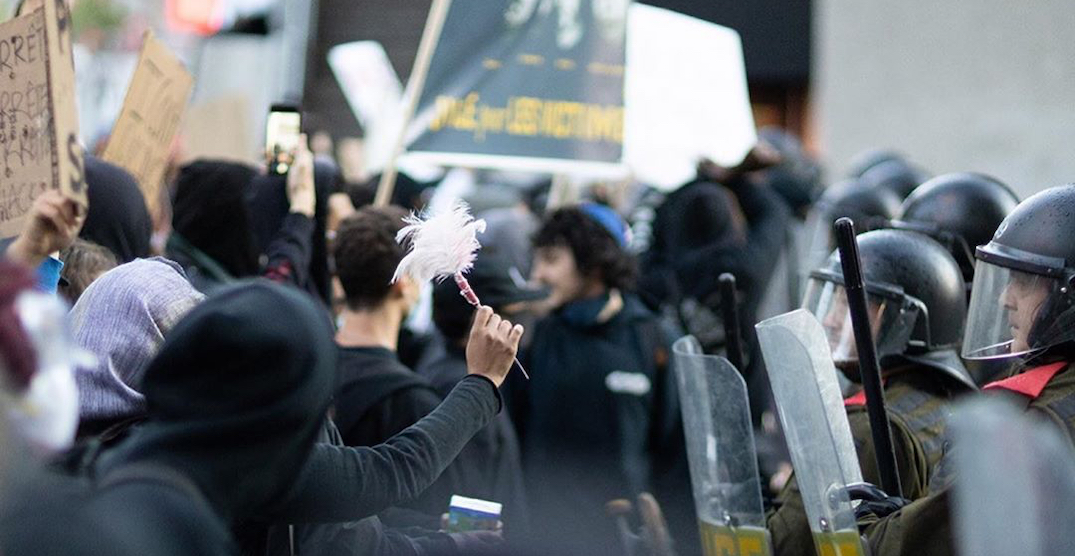 After thousands of Montrealers turned up to protest police brutality and racial profiling on Sunday, police say 11 people have been arrested.

According to Raphaël Bergeron of the SPVM (Service de police de la Ville de Montréal), “over 70 fines of mischief were reported” among the 11 arrests which include nine for breaking-and-entering, one for assault with a weapon, and one for mischief.

In a phone call with Daily Hive, Bergeron says other arrests could come “in the following days” and a police investigation is currently underway.

The anti-racism protesters clashed with local police after the SPVM ruled the gathering to consist of “illegal behaviours.”

Warning to the #manifencours : Because of the infractions that are committed, we order everyone to disperse and leave the area immediately.

“As we denounce recent police killings in the USA, we also denounce police killings of Black Lives here in Montreal, from Anthony Griffin in NDG in 1987 to BonyJean-Pierre in Montréal-Nord (2016), Pierre Coriolan in Centre-Sud (2017) and Nicholas Gibbs in NDG (2018),” reads the organizer’s Facebook page.

With the risk of transmission due to the COVID-19 pandemic, organizers urged participants to practice caution by maintaining proper physical distancing and wearing masks.

what the #MontrealProtest ACTUALLY looked like before police decided to come in and tear gas for no fucking reason: a thread
PLZ SHARE don’t let the media flip this protest into something it wasn’t #BlackLivesMatter ✊🏽✊🏾✊🏿❤️ pic.twitter.com/5xVRbzUoIJ

The #MontrealProtest was totally peaceful the entire way through. All we did was march and chant. As soon as the sun went down the cops started firing rubber bullets and tear gas at the crowds. They don’t want peaceful protests, they want silence. pic.twitter.com/CwA3PZCHaM

#MontrealProtest we PEACEFULLY protested today and the SPVM sprayed us with tear gas and started shooting rubber bullets after announcing the protest illegal. the only violence incited today was BY THE POLICE #ACAB #BLM pic.twitter.com/M76S2epSX7

There is NO NEED 2 Fire Off Shots.