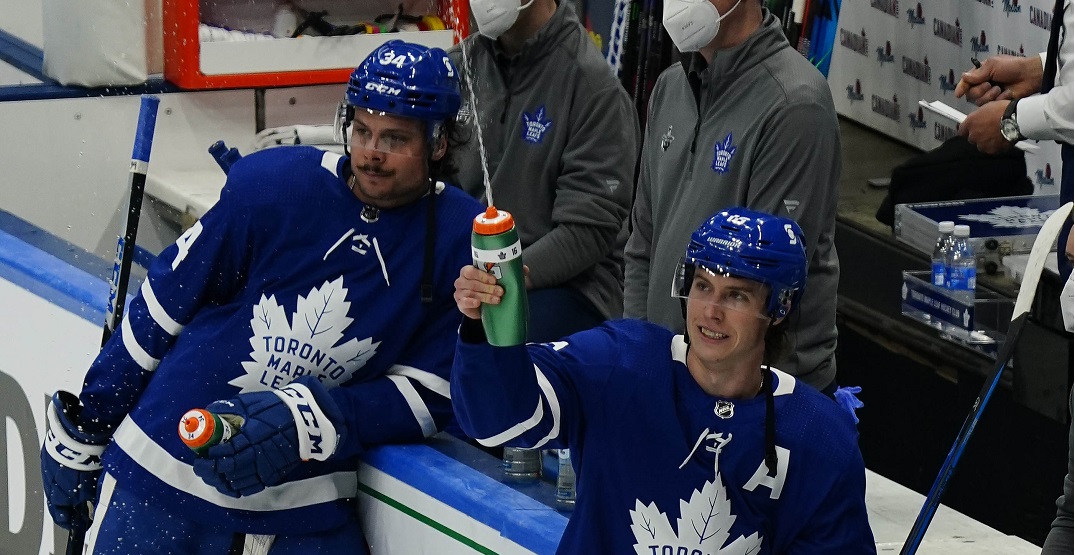 The Toronto Maple Leafs went through a bit of a weird one in Game 5 on Thursday night, turning a 3-0 deficit against the Montreal Canadiens into a… heartbreaking 4-3 overtime loss.

With a chance to win their first playoff series since 2004, Toronto was unable to close the door. A rough turnover from Alex Galchenyuk against his former team in overtime made for some ugly viewing.

As much as that moment may have sucked for many Leafs fans, it’s over. And there’s one chance — two, if necessary — to get right back at it. That’s the glory of taking a 3-1 lead instead of having to claw back from one like the Leafs are prone to do.

Exhale. Go for a walk. Get your Saturday night food in order for game 6. Or if you want, cough up your paycheque to go to the game.

Here are five reasons why it’s not time to panic for Leafs fans as they head to the Bell Centre tomorrow for a second shot at closing the series out.

1. Auston Matthews has yet to have his signature moment

The 2021 Rocket Richard winner has been rather pedestrian in this series, with one goal and three assists in five games.

Matthews has had 25 shots on net this series, including eight in game 1. Amongst forwards, that trails only Sebastian Aho, who has 30 shots in six games, (the exact same per game pace), and David Pastrnak, with 29 in 5.

In terms of individual expected goals (at all strengths, per Natural Stat Trick) so far, he’s at 2.82 – second best in the series behind only Zach Hyman.

As long as Matthews keeps playing hard like he has been, it’s only a matter of time before his second goal of the playoffs will come.

2. The percentages are in their favour

Numbers, odds, analytics, statistics, figures, whatever you want to say: they usually mean next to nothing to Leafs fans. This team is beyond comprehension, no matter who is on the roster or on the bench. But it can be comforting for some to know it’s about a 9 in 10 chance they pull this off (yes, they could always be the one.)

MoneyPuck.com gives the Leafs an 89.2 % chance of winning one of the next two games and advancing, with a 60% chance of doing it tomorrow night.

The Athletic carries similar odds, with the Leafs having an 89% chance of winning the series.

3. The Leafs’ depth is coming through

The point of building a good team is that you never know exactly who you are going to count on. Many nights it’s Matthews and Mitch Marner, who is off his own usual torrid pace a bit, with four assists but no goals through five games.

Forgive me for a generous use of depth here, but I’m counting everyone on the roster not named Matthews, Marner, and Tavares (who barely got a chance to play in the series.)

William Nylander is the obvious star of the series, with four goals and three assists to lead the team in scoring. But Alex Kerfoot has quietly put up a goal and four assists, Jake Muzzin and Jason Spezza each have a pair of goals, and Joe Thornton notched his first playoff goal since 2019 in Game 4. Sixteen different Leafs have points, compared to just 10 Canadiens.

Jack Campbell had his worst game of the series last night, allowing four goals on 29 shots.

And yet – he still did just about everything necessary for the Leafs to win. Despite an ugly 3-0 deficit, Campbell stood tall and calm and kept things within reason for a dynamic offence. It’s hard to pin last night’s loss on a goalie with a .944 save percentage through five games. As long as Campbell is giving it his all, the Leafs should have a very decent chance to win most nights.

5. The Leafs have controlled the pace all series

In the Leafs’ three wins in the series, they’ve trailed for under five minutes total. In Game 1 of the series, which is almost a write-off due to shock associated with the Tavares injury, it was a one-goal game or tied for the entirety of the contest.

Last night was the first multi-goal lead for the Canadiens against the Leafs in the series, and though Montreal looked comfortable getting out in front, they didn’t exactly hold onto it all that well. There was a sense when down 1, 2, or even 3-0 that the Leafs just needed a little juice to get it going. Playoff comebacks are of course more fun when they’re completely successful, but it’s not like the Leafs just rolled over for Montreal either.

There’s a reason Toronto is favoured in this series, and they were a lucky bounce away from it ending last night.