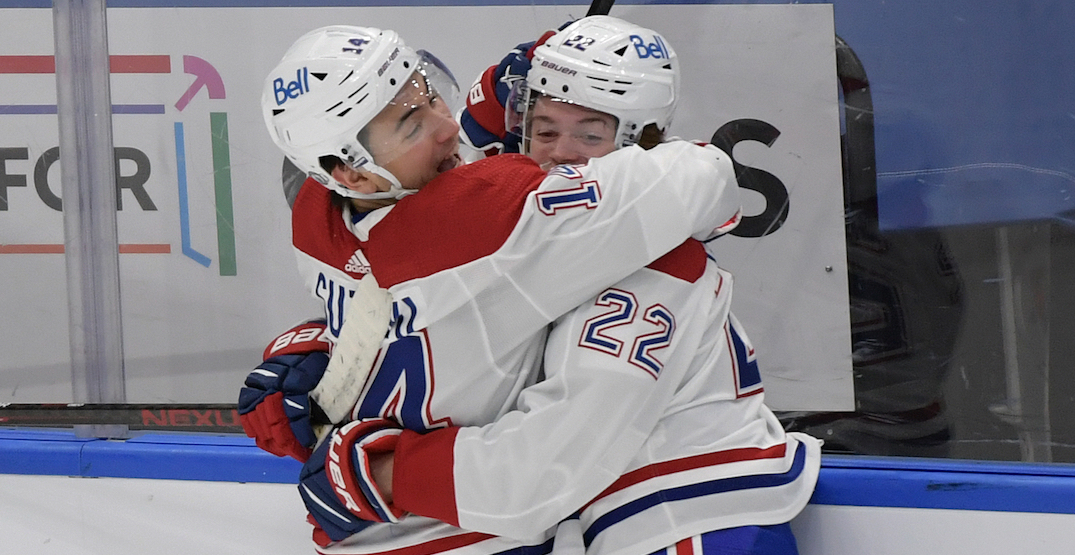 Despite blowing a 3-0 lead in Game 5, the Montreal Canadiens will live to fight another day after Nick Suzuki scored on a 2-on-0 with Cole Caufield in overtime to give them a 4-3 win over the Toronto Maple Leafs.

The win came in dramatic fashion, but for a while it looked like Montreal was going to cruise to victory.

Joel Armia and Jake Muzzin each scored twice in the game for their respective teams, while Jesperi Kotkaniemi and Zach Hyman found the back of the net as well. After Kotkaniemi extended Montreal’s lead to 3-0 in the second period, Hyman got Toronto on the board to send the Maple Leafs into the second intermission down a pair.

In the third, Muzzin scored twice — both on goals Carey Price might want to have back — to tie things up and put the Leafs in position to punch their ticket to the second round for the first time since 2004.

But Alex Galchenyuk’s turnover less than a minute into overtime led to a 2-on-0 for Suzuki and Caufield, finished off by Suzuki to keep the Habs alive.

Montreal took a 2-0 lead to the first intermission after outshooting Toronto 14-8 in the opening frame, looking like a team desperate to keep its season alive.

After getting shut out in Game 4 and having scored just four goals total through the first four games of the series, a quick start on offence was crucial for the Canadiens on Thursday. Armia got them on the board just over five minutes into the game.

Armia snipes his first of the playoffs!

Make that 2 for Joel!

Price also came up big in the first period, most notably with this save on William Nylander, who failed to score for the first time in this series.

Less than five minutes into the second period, Kotkaniemi forced a turnover behind the Toronto net, then beat Jack Campbell for his second goal of the series to extend Montreal’s lead to 3-0.

After falling into a 3-0 hole, the Leafs seemed to decide they didn’t want to make another trip to Montreal and wanted to try to end this tonight.

Hyman got Toronto on the board less than two minutes after Kotkaniemi’s goal.

Then in the third period, with just over 13 minutes remaining, a Jake Muzzin point shot got through a crowd of bodies and beat Price to pull the Leafs within a goal.

Then with just over eight minutes to go, Muzzin redirected a pass from Galchenyuk that beat Price through his five hole to tie things up.

Given the Maple Leafs’ playoff history, overcoming a three-goal deficit would have been a great way to slay one of their dragons and secure their first playoff series victory in almost two decades. It wasn’t meant to be, though. Suzuki’s overtime goal means they’ll have to try again in Game 6 at Bell Centre on Saturday.

The Quebec government is going to allow the Canadiens to host 2,500 fans for Saturday’s game, marking the first NHL game played in front of a live audience in Canada since the COVID-19 pandemic began. The game will start at 7:30 pm ET.