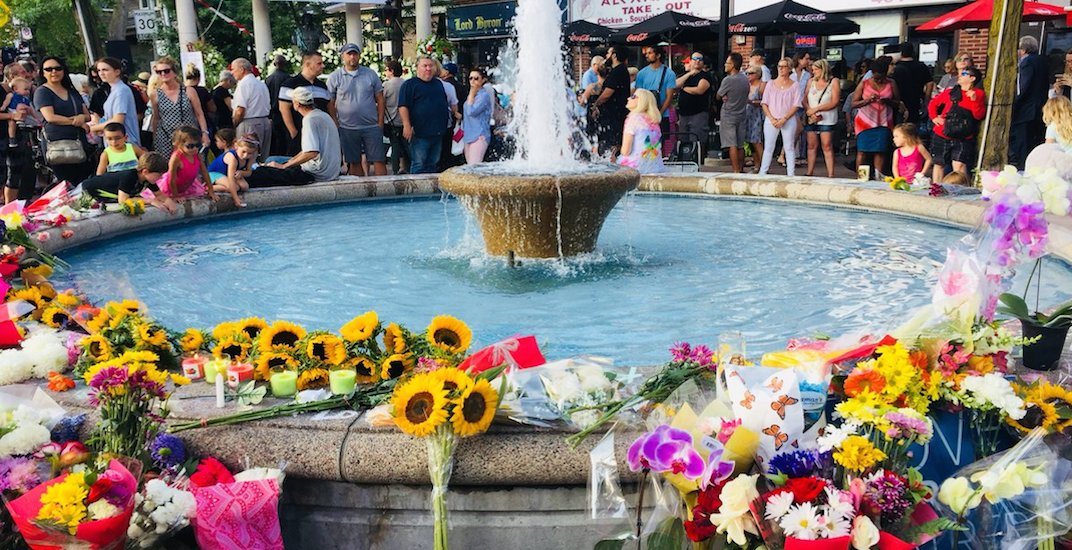 Thursday marks the three-year anniversary of the Danforth shooting in Toronto.

On July 22, 2018, a gunman shot and killed two people and injured 13 more before killing himself on a bustling summer night in Toronto’s Danforth neighbourhood. Many people were outside eating on patios when the unexpected violence broke out.

Toronto Mayor John Tory released a statement Thursday on the anniversary of the tragedy, saying he’ll continue to remember Julianna Kozis, 10, and Reese Fallon, 18, who were both killed in the shooting.

“Three years later, I know that the healing continues for the families who lost their young daughters, for the injured, for those who were traumatized by this incident, as well as all emergency first responders who rushed towards the danger that evening to help,” Tory said.

The Toronto sign will be dimmed Thursday as a mark of respect.

Today, the Toronto Sign is dimmed in memory of the lives lost and the lives forever changed by the Danforth tragedy three years ago. pic.twitter.com/s5MIpzR7od

“We remain determined to keep this a safe city, free from hatred and violence and where an innocent night out with friends in the summer can be peaceful and filled with joy,” Tory said.

Danforth Families for Safe Communities, a group of families affected by the shooting, say people may gather Thursday evening at the two trees planted near McConnell and Carlaw avenues in memory of the victims.

“We have learned that you do not forget. You try and accept that it happened, and you try your best to live with it,” DFSC said in a statement.

We miss Julianna and Reese everyday and will keep them in our hearts always.https://t.co/AoxtFzMy9h

The organization is also advocating for stricter gun laws, saying the stolen handgun the shooter used was imported to Canada legally.

“We must reduce the risk of death posed to the broader community by the existence of these inexpensive, portable, concealable, and deadly weapons.”