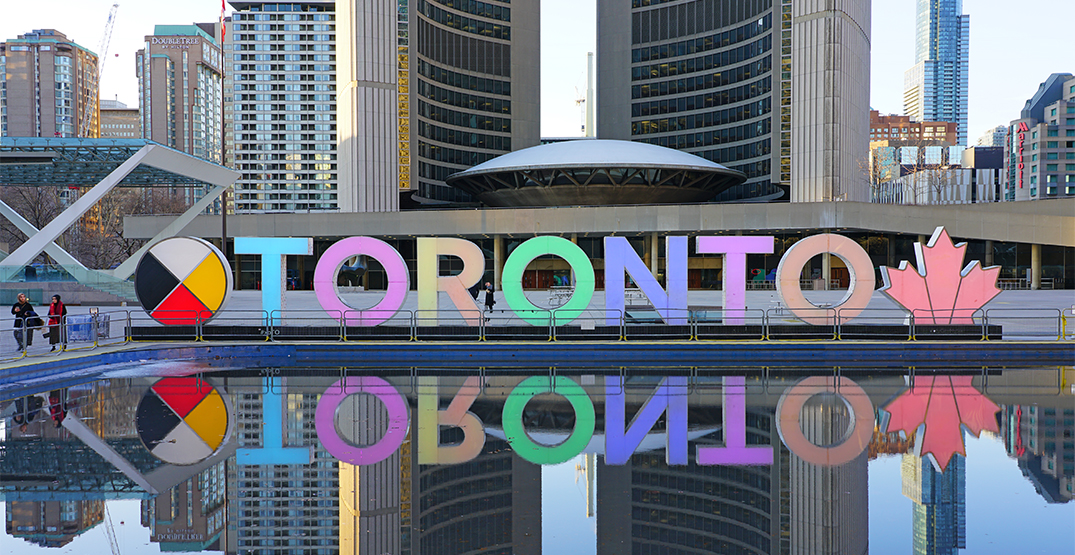 The Toronto sign at Nathan Phillips Square is a relatively recent but instantly recognizable part of the city’s downtown core.

It’s photographed countless times per year by locals and tourists alike, and adds some hometown pride to the relatively grey square outside City Hall.

But why is it there? When did it appear? We’ll help you get to know the iconic landmark better:

The Toronto sign was installed for the 2015 Pan-Am Games

The original sign was installed ahead of the Pan American and Parapan American Games.

That’s the same set of games that drew athletes from all over the Americas and made disgruntled Toronto drivers even more annoyed because lanes of certain highways were cordoned off for games participants and officials.

The Maple Leaf and Medicine Wheel were added later

The sign initially just said Toronto. But a Maple Leaf was added on the left hand side for Canada 150 in 2017, and the four-coloured Medicine Wheel was added for National Indigenous Peoples Day in 2018.

The leaf contains 14,000 LED lights and they’re divided into eight sections from top to bottom, allowing for ombre blending and colour graduation.

The sign proved so popular that City officials replaced the original with a replica last year. The new version is 3D, stands 10 feet tall, and has a vinyl wrap on the outer edges of its letters. It’s also more durable than the original.

The edges of the letters display work by local artists

The sign’s current vinyl wrap features the work Patterns of the People by Toronto artist Danilo Deluxo McCallum. It’s in honour of the United Nations’ International Decade for People of African Descent.

From 2018 to 2020 it had a vinyl wrap with symbols of significance for Indigenous communities.

The letters light up to support various causes

The Toronto Sign will be lit pink tonight through tomorrow morning to recognize our vaccination milestone: 80% of eligible Torontonians fully vaccinated.#TeamToronto pic.twitter.com/XPOEkkmpDN

If you’ve ever wondered why the sign is a different colour from one day to the next, it’s because different colours are chosen to mark certain events or support certain groups.

During the COVID-19 pandemic the sign has regularly been illuminated blue to support healthcare workers.

There’s a complete schedule of the sign’s colours and what they mean on the City’s website.

The sign is capable of creating a LOT of colours

You can request that the sign lit up a certain colour

The City accepts emailed requests to [email protected] about adding colours to the sign’s rotation. The request must be submitted at least one month in advance of the desired date.

That’s about the same weight as a garbage truck. Each individual letter weighs about 136 kilograms, and the plinth they sit on weighs more than 1,100 kilograms.

The Toronto word is 22 metres long

Big enough to make an impact, and small enough to fit in the background of our selfies.

Each letter can be moved and placed on its own

We suddenly have a great idea for a scavenger hunt…