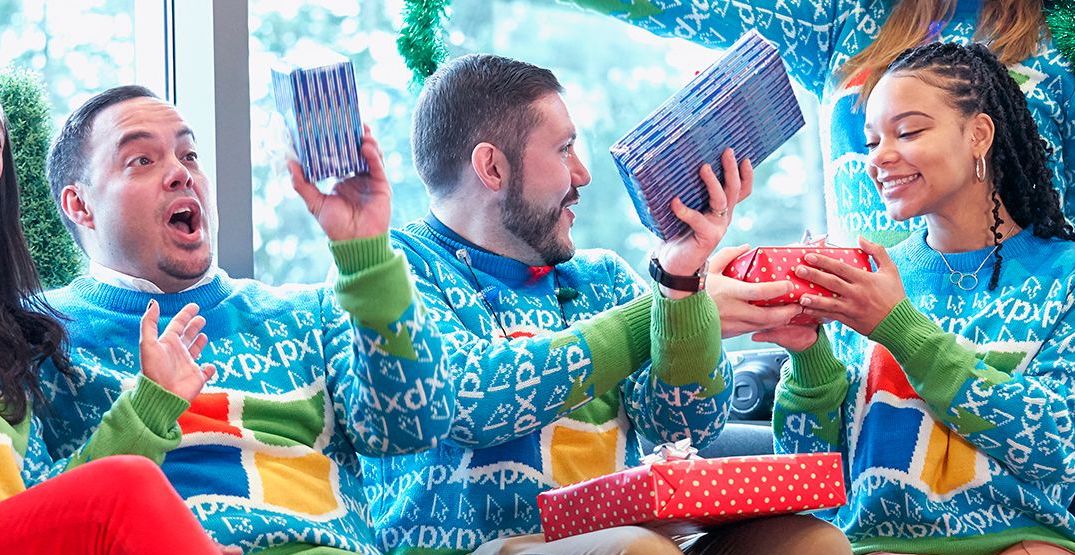 Yesterday, the possibility of a Microsoft Christmas sweater made commotion online. Today, we’re here to let you know that yes, the sweaters are real, but no, they aren’t for sale.

This morning at 9 am, Windows tweeted another cryptic tweet, this time asking users: “What are your warmest XP memories?”

It’s back! The #WindowsUglySweater warmed so many 💙s last year that it had to return—upgraded for our loyal fans, of course. What are your warmest XP memories? pic.twitter.com/S02WD89VdH

It’s been theorized that if you answer the question and include the hashtag #WindowsUglySweater, you could be in the running to win one of the sweaters.

The sweater’s box is labeled “pro-h0-ho-fessional” under the name of the 2001 software. On the back of the box, contents are described as “easy-on installation” and “tailored experience.” The brand even goes so far as to add a joke about “backward compatibility” and how the sweater worn forwards yields best results.

The sweater itself is the signature Windows blue with the software’s 2001 logo on the front.

Those who have received the sweater have already begun parading them online.

On one hand I know it’s an ad and they got us all talking about Microsoft… but on the other hand I’m wearing it while testing the Mac Pro, so it’s totally balancing everything out (and also this is now the best #uglysweater I own) pic.twitter.com/GeCwkvGtZI

OMG!! Microsoft sent me a Windows XP style #WindowsUglySweater for the holidays! It’s soooooooo good, and it came in this super cool XP product box too 😀 Thanks @Microsoft @Windows! pic.twitter.com/3HxbpmU5c1

What are you waiting for? Get Tweeting!