Over the weekend, the number of confirmed cases of coronavirus in the United States reached the 1,500,000 mark.

During the last few weeks, President Donald Trump began the reopening process in America, and states have been given permission to slowly kick things off should they meet expectations put forth by the new guidelines.

However, despite best practices and a slowing of the spread, the number of cases confirmed in the US has surpassed 1.5 million just under three weeks since hitting the one million mark.

Within the United States, the city of New York has bee the hardest hit, with 193,821 confirmed cases in the city, and 20,806 deaths. This adds up to a more than 10% mortality rate, one of the highest in the country.

Known new cases appear to be trending downwards in the United States, but has been accompanied by nominal spikes back up.

According to data collected by John Hopkins University, this up and down trend is common in many of the world’s hardest-hit areas. 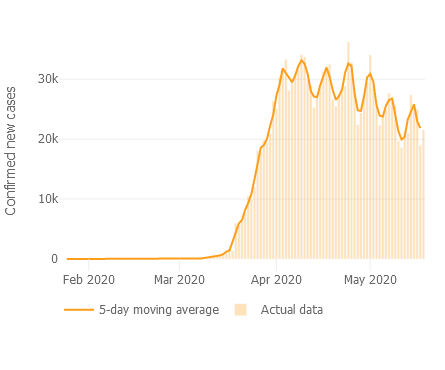 It has been 116 days since the first case of coronavirus was confirmed in the US, and the FDA is working with vaccine researchers to develop a response to the evolving issue, though, it could take upwards of a year before something substantial is made available to the public.