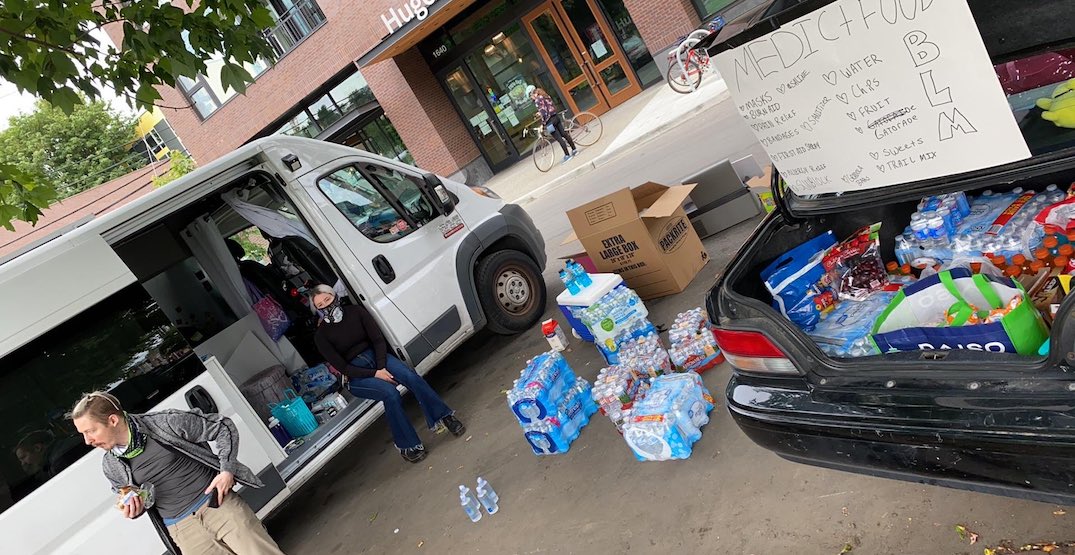 Some Seattleites have been spending their time setting up booths for protesters to restock and get supplies as needed.

The stations have popped up around the city, with many stationed around Cal Anderson Park.

One supporter, who asked to be identified as Carmen Dioxide, told Daily Hive that she was marching with a friend on Monday when her knees gave out and fell.

“Immediately I was helped up by 20 different people and was offered food and water.”

This interaction made her want to continue showing support in any way that she could while giving back to those who’d helped her on Monday.

Dioxide and her friend aren’t the only ones helping the protesters, as many helpers have been spotted around the city.

WHEN YOU GO HOME, WE GO HOME

We’re open on 11th south of Pike. DM if you need help or a ride or anything else; we’ve got you.#seattleprotests #seattleprotest pic.twitter.com/erc9qg9efd

She also told Daily Hive that “while it would be nice to have an article about me — it doesn’t feel right as a white person. What I’m doing isn’t groundbreaking or incredible — it’s basic human kindness.”

She mentioned that she’d rather the media continue to shine a light on the Black lives being harmed and killed by police all over the country.

“I want [people] to know that we will keep marching and protesting until something changes. Every single night the SPD has wrongfully gassed, shot at, maced, and arrested its citizens for peaceful protesting. They lie and say we are rioting but it’s just not true… rioters and looters are trying to distract from our message of Black Lives Matter.”

She also added that while they may be arresting the four police officers who killed George Floyd, there is still no justice for Breonna Taylor and the many others who have been victims of police brutality.

Although the protests continue, Seattle Mayor Jenny Durkan has rescinded the 5 pm curfew and has made a statement “that much of the violence and destruction, both here in Seattle and across the country, has been instigated and perpetuated by white men.”