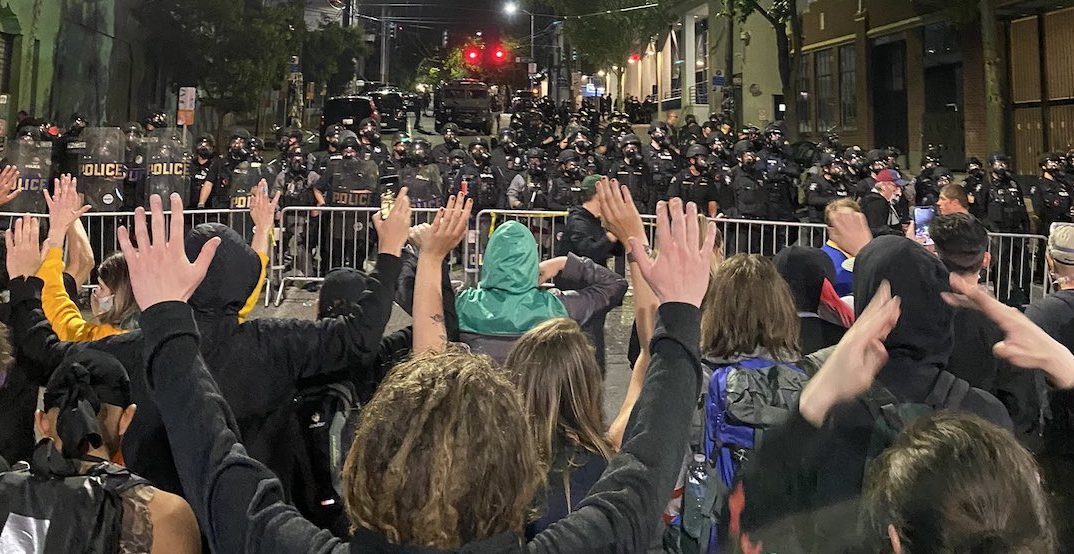 On Monday, a peaceful protest from Capitol Hill to the East Precinct quickly turned violent.

The Seattle Police Department declared the protest a riot and released a statement that the protesters had been throwing rocks, bottles, and fireworks at officers, prompting them to react.

“Hours before declaring the incident a riot, East Precinct commanders had spoken and knelt with members of the group at a barricade line near the precinct. As the night continued, members of the crowd threw rocks, bottles, and fireworks at officers, and attempted to break through a fence line at 11th Avenue and Pine Street,” a statement posted to the Seattle Police Department’s blog read. “In response to the increasing number of assaults on officers and the increasing risk to public safety, the Incident Commander declared the incident a riot.”

Omari Salisbury happened to be livestreaming the protest, providing commentary and frontline footage to thousands of viewers. Protesters can be seen standing around peacefully.

At around the 22-minute mark, the crowd begins chanting, “Let us through.”

At 25 minutes, Salisbury notes that the police brought in reinforcements, and he makes his way to the barricade, where he speaks about the police’s posture: “If you see the officers here on the bikes get tapped out by the officers with the gas masks, then we can say that’s a change in posture… Now we need to watch this front line here.”

At around 28 minutes, the unmasked police officers are then swapped out for ones in gas masks. Protesters can be seen taking out their umbrellas, seemingly preparing to be gassed, before a police officer grabs one out of a protester’s hands. Another officer can be seen spraying tear gas into the crowd.

All the while, the crowd continues chanting, “We don’t need no violence here.”

State police are seen trying to open the barricade as tear gas is continually sprayed into the crowd and flashbangs are set off. Several protesters can be seen with their hands up, trying to resist the gas and bangs while most of the crowd disperses.

This is from a livestream I just watched from the Seattle protest and holy shit. So glad the streamer is okay! #BlackLivesMatter pic.twitter.com/9HWcXmJJea

Tear gas was used as a chemical weapon in World War I but has since been outlawed as a tool of warfare by many countries. It remains legal to be used by law enforcement for riot control.

The Centers for Disease Control and Prevention (CDC) notes that tear gases are “chemical compounds that temporarily make people unable to function by causing irritation to the eyes, mouth, throat, lungs, and skin.”

If you are exposed to tear gas, the CDC recommends immediately leaving the area where the gases were released and head to the highest ground possible “because riot control agents will form a dense vapor cloud that can travel close to the ground.”

You should also remove your clothing, cutting them off the body rather than lifting above the head. Be sure to wash any riot control agent from your skin with large amounts of soap and water and dispose of the contaminated clothing.

The protests against police violence on Black Americans were sparked by the murder of George Floyd and are currently in their fourth day in Seattle.

In a graphic video posted to social media on May 25, Floyd was heard repeatedly saying that he could not breathe while then-police officer Derek Chauvin held him down with a knee on his neck.

The officers claim to have handcuffed the suspect and restrained him on the ground while an ambulance was called. He was then transported to Hennepin County Medical Center, where he was pronounced deceased.