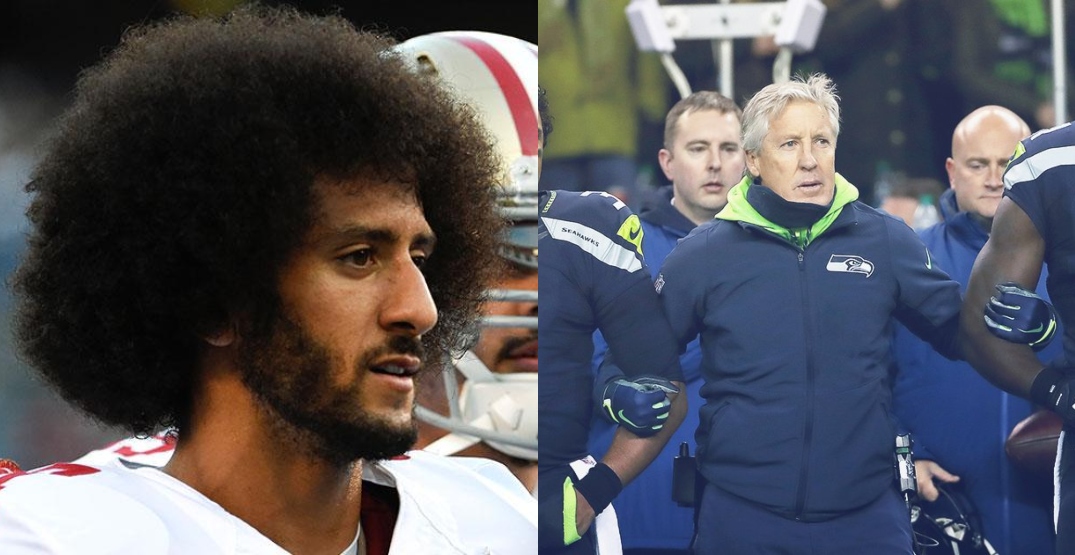 Carroll, who met with the media via video call on Thursday, said his decision to not sign Kaepernick had nothing to do with kneeling during the national anthem. Instead, Carroll says, it was because he saw Kaepernick as a starter, not someone who would simply back up Russell Wilson.

Other teams definitely appeared to have a problem with Kaepernick’s protests, because despite having the talent to be an NFL starter, he has been unsigned since becoming a free agent in 2017.

“I regret that we weren’t the one way back when that just did it just to do it, even though I thought that it wasn’t the right fit necessarily for us at the time,” Carroll told reporters. “The reason it wasn’t the right fit is because I held him in such a high regard I didn’t see him as a backup quarterback and I didn’t want to put him in that situation with Russ. It just didn’t feel like it would fit right. That’s the way I felt about it.

“So I just wish it would happen, and I wish we would have been a part of it when the time was available then. We’re kind of set up right now, so football-wise, it doesn’t seem to fit us like I said. But there’s a lot of time here. We’ll see what happens.”

Kaepernick hasn’t played since 2016, when he decided to kneel during the national anthem to protest racial injustice and police brutality in the United States.

“Kaep was right on point,” said Carroll. “He was right on the topics about police brutality and inequality, and he was right on the subject matter at the time. That’s so obvious now where maybe all of the flak that flew about not honoring the flag and all the other things that were not even a part of the demonstration or what his intent was at all, that just skewed the whole discussion. I don’t think that’s around now. It’s different at this time frame.”

As for whether Kaepernick will get another shot in the NFL now at age 32? Carroll said he likes his team’s current setup with Geno Smith backing up Wilson, but he added that another team asked him about Kaepernick on Thursday, something that hasn’t happened in years.

“I won’t tell you who it was, but I got a phone call today asking inquiring about the situation, so I know somebody is interested. So we’ll see what happens with that.”