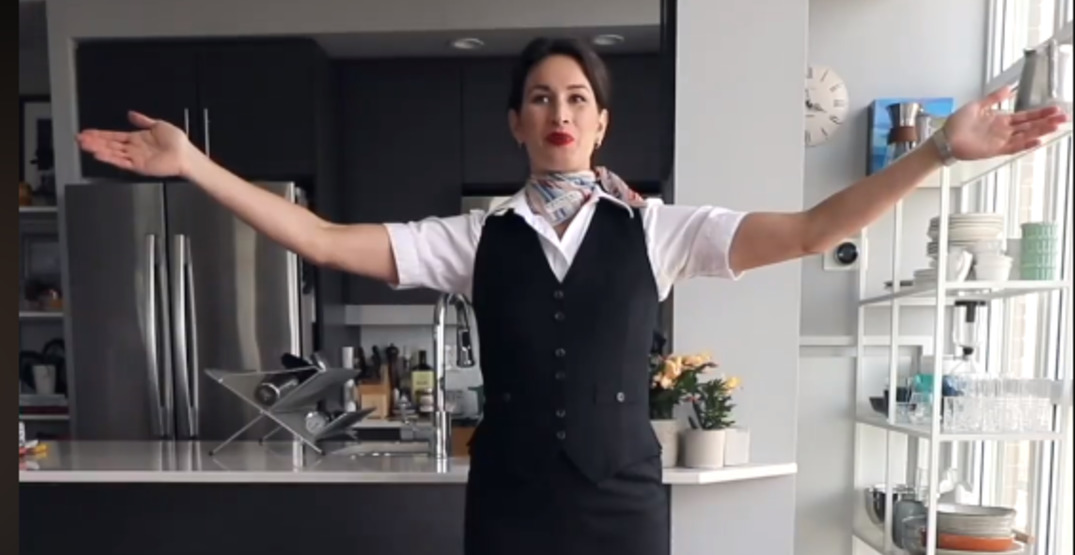 Being able to work from home is a privilege that many of us may be taking for granted.

Because of the pandemic, a number of workers in client-reliant industries, particularly the travel industry, have either been laid off or had their hours substantially minimized.

While it may be easy to default to feeling discouraged, upset, or angry, Canadian comedian Wes Barker and his wife, Kristen Gillett, a flight attendant for WestJet, decided to find some humor in an otherwise disappointing situation.

The couple posted a hilarious video in which viewers can see what it would be like for a flight attendant to work from home.

The video, which has garnered over 800,000 views on YouTube, depicts Gillett performing the everyday duties that would be deemed reasonable for a flight attendant, were it not for the change in venue.

From signaling the appropriates safety exits to offering complimentary drinks and warm towels to selling duty-free to requesting that her husband stow his laptop as a necessary safety measure, the video presents an amusing perspective.

It also illustrates the simple fact that not all jobs, such as a flight attendant, can be easily performed through implementing a work-from-home policy.

The video has received a significant amount of praise on Facebook, both from other flight attendants as well as those who simply think it’s funny.

“My life nailed in a video. 😂 thank you for the laughs,” one user wrote, “As I am heading into two months at home with no pay this is the kind of motivation I need Jeje 😂 I might even do this to my husband and son.”

“Love love love this! Have shown to everyone!!!” wrote another, “I’ve been a flight attendant for over 36 years and this completely captures our lives onboard the aircraft ( in a comedic way of course 😉) You deserve an award by the association of flight attendants and everyone else!!!!”

At times like these, it is best to try and find humor whenever we can. So, kudos to the couple for having a laugh and allowing the rest of us to join in!