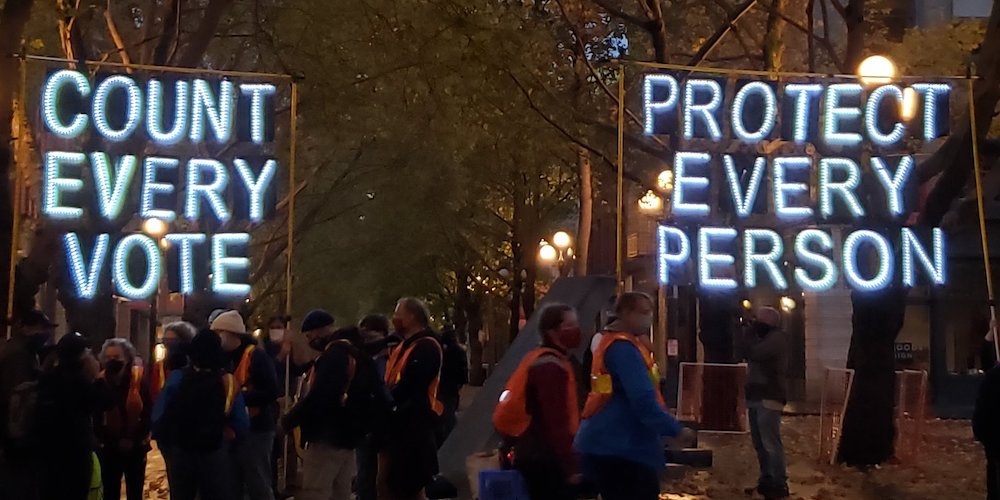 A large crowd has gathered at Occidental Park to join in on Protect the Vote protests that are taking place across the country.

According to event organizers, the rally is a direct reaction to President Donald Trump’s remarks yesterday, where he’d declared that he’d won the election.

Organizers have announced a unified message: “We, the American People, insist that you Count Every Vote, and we will stand in solidarity to protect our communities against any and all threats from militia, white supremacists or governmental forces while you do.”

Here’s what the Downtown Seattle rally is looking like:

We’re rallying in Seattle to Count Every Vote and Protect Every Person #ProtectTheResults pic.twitter.com/bz2mnbsYZg

I can’t believe in the year 2020, we have to argue that every vote cast in an election must be counted. #EveryVoteCounts #EVERYFUCKINGVOTE #seattleprotests pic.twitter.com/nVc1w2AhyQ

The Count Every Vote, Protect Every Person protest at Occidental Park is getting started#Election2020 #Seattle #seattleprotests pic.twitter.com/CQf0zF8j4J