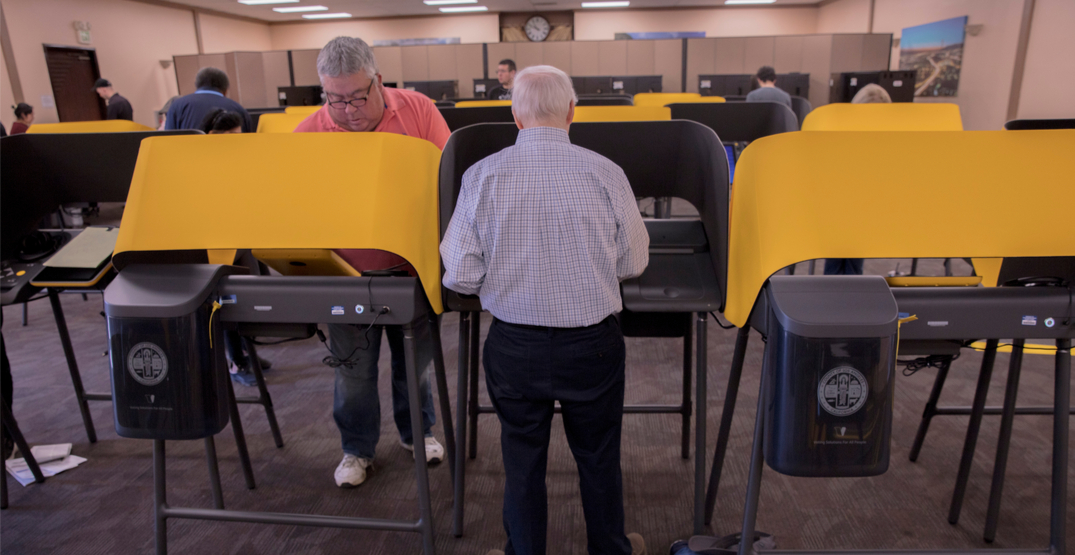 The COVID-19 pandemic has affected many things in American life, including the future of America’s leadership. Many are asking, how will the coronavirus impact the 2020 Election?

On November 3, the United States will hold it’s 59th Presidential Election, deciding who will lead the US for the next four years. In the lead-up, there are still three months worth of primary elections, caucus meetings, and rallies, providing reasons for large groups to gather.

The whittling of the candidates

What used to be a seven-horse primary race, has been whittled down to just two Democratic candidates. With the recent drop-out of Hawaii’s Tulsi Gabbard, it’s now just former Vice President Joe Biden and Senator Bernie Sanders vying for the nomination.

March 17 saw the third important Tuesday of the Democratic Primary Election, and Biden continued to increase his delegate lead over Sanders. The polls opened shortly after Sunday’s first head-to-head debate between the two front-runners.

Biden swept all three major primary votes, winning Florida, Illinois, and Arizona. The updated delegate count sees Biden at 1,215, and Sanders with 909. The next large delegate handout is on April 4, when Alaska, Hawaii, and Wyoming will hold their primaries.

President Donald Trump has run almost unopposed in the 2020 Republican primaries. On March 18, after the president earned enough delegates to claim the candidacy place for the Republican Party, Trump’s only opposition, Governor Bill Weld, dropped out of the race.

The coronavirus outbreak, and the subsequent shutdown of American’s day-to-day life, greatly complicates the voting process throughout the US. Established years ago, Absentee Voting rights provides the opportunity for those away from their state to vote by mail during elections.

The newly-proposed Resilient Elections During Quarantines and Natural Disasters Act of 2020 states that should 25% of states declare a state of emergency, all citizens must be allowed to vote via absentee ballots. Currently, 34 states allow voters to apply for absentee ballots or to vote directly by mail, while 16 states do not.

The bill also asks that any voting ballot be accepted as long as it is postmarked by election day, to ensure a halt or delay in mail services does not swing an election one way or another.

It’s a civic duty and a constitutionally guaranteed right, but some American’s are concerned that the simple act of heading to a polling station to vote could be dangerous, considering the current risks posed by the coronavirus.

In a tweet posted by Cook County (Illinois) clerk Karen Yarbrough, the clerk’s office is asking polling station workers to ensure safe practices during current and near-future votes. Though, there is no guarantee that clerks around the country are following the policies handed down by the Clerk’s Office and the Center for Disease Control.

While some polling stations were reported to have received cleaning and sanitation supplies, some stations reportedly never received the supplies they needed to even hold voting.

13 hrs w/out voting equipment. On the left is my precinct (ward 44 precinct 33) & on the right is the precinct we share the polling place with (ward 44 precinct 15) which has had their blue box since last night. 4hr line @ polling plc that we redirect ppl to. pic.twitter.com/p1tkcM4bRL

Ohio was left off of the March 17 primary list after Governor DeWine notified residents the day before that their polling stations will remain closed and primaries will be moved to a later date. It has now been set on June 2, almost three months from the original voting date.

“Extending for that long is highly problematic for any number of reasons, and it is not at all clear that in-person voting will be possible on that date anyway,” responded Ohio Democratic Chairman David Pepper. Shortly after, the party filed an official lawsuit with the US Supreme Court against Ohio’s Secretary of State, Frank LaRose.

The Democratic Party has asked for a voting date to be open by-mail until April 25 and demanded the Supreme Court to “direct Ohio’s Boards of Elections to accept and count all valid absentee ballots postmarked on or before April 28.”

Other states followed DeWine’s lead and have postponed their primary elections. Pushed primaries include states like Kentucky, Georgia, Louisiana, and Maryland.

If you are unsure as to whether the current state of the coronavirus outbreak is affecting your county, your voting privileges, or your need to vote by mail, please head to vote.gov for more information.

As the coronavirus continues to affect the American way of life, and how things are done all over the world, the situation surrounding the 2020 US Presidential Election will shift and sway.

President Trump continues to promote the idea that all will return to normal in no time, stating “America will re-open sooner than we thought.” However, medical health authorities urge the public to remain in isolation and maintain assurances that they will continue to advise the president with the health of Americans as the foremost priority.

For up-to-date information regarding the process and state of your region, be sure to check Vote.Gov on a regular basis.