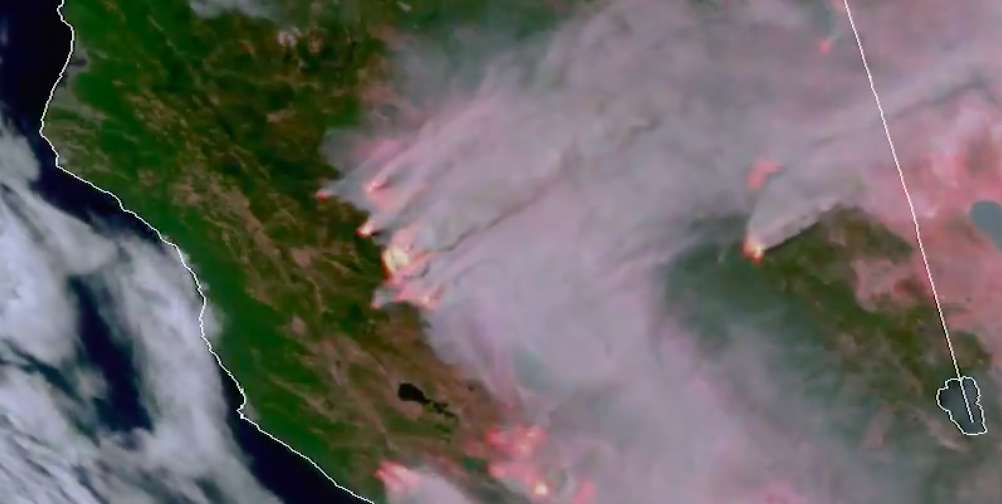 Wildfires have already burned over 1.4 million acres of land in California as fire crews continue to battle 12 blazes. The devastation across the state is hard to imagine, and even more terrifying when viewed from above.

The record-setting fires have grown so large, the heat and smoke generated through them can be seen by satellites orbiting overhead.

On August 21, a tweet from the US’s National Oceanic and Atmospheric Administration saw fires ignite across the state, including the LNU complex fire, which burned over 335 sq miles in three days — about 867 km.

As the sun set yesterday, #GOESWest saw fires ignite and burn across the state of #California. The #CaliforniaWildfires recently intensified with the #LNUcomplexfire, which burned over 335 sq. miles in three days; currently, it is at 0% containment. pic.twitter.com/7Bh9aA9JSu

The same day, the Cooperative Institute for Research in the Atmosphere (CIRA) took to social media and posted shocking high-resolution satellite imagery of the fires burning. The crystal clear video makes the incredible size of the blazes spreading through the northern part of the state.

It has been a year of devastating fires, as Australia weathered its own brutal wildfires and Siberia not only dealt with not just burning, but the hottest recorded temperatures in its arctic region. One CIRA researcher shared a collection of images from the three locations during the incidents.

The massive wildfires of 2020. pic.twitter.com/ithwTti9vN

Last week, Governor Gavin Newsom reached out to Canada and Australia for help combatting the blaze.

According to California Fire, more than 15,800 firefighters are working towards containing the over two dozen major fires and lightning complexes, all while responding to new emergencies and wildfires each day.

Since the “lightning siege” started on Saturday, August 15, there have been nearly 14,000 lightning strikes. During this time, there have been more than 800 new wildfires, causing seven known fatalities and destroying over 2,200 structures.