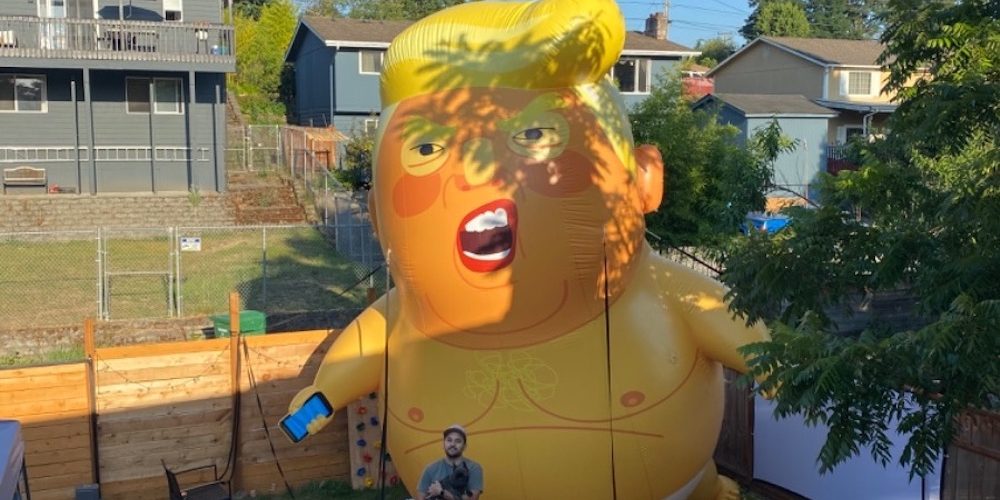 If you see a balloon of Baby Trump floating by several Seattle hotspots, don’t worry: it’s just the newest addition to our skyline.

After seeing a balloon of Baby Trump flying in London last summer, Seattle real estate agent Christian Castro was blown away by the activism and protests and realized that he needed to get his hands on the flying masterpiece.

He now spends some of his free time flying the Baby Trump balloon once a week as a way of encouraging people to vote.

With only a few Baby Trumps floating around the world, Castro went on a search to locate one for himself.

“I read the Daily Mail UK article about the balloon which mentioned the group that was responsible. I reached out to the group who directed me to a graphic artist who then referred me to a guy in New Jersey who owns about a dozen of these,” Castro told Daily Hive. “I flew to Arizona to ‘babysit’ a Trump Baby at some rallies before eventually ordering one for myself in West Seattle.”

He plans on flying the balloon at least once a week and made its first debut at the West Seattle Farmer’s Market. Baby Trump’s next appearances are scheduled to be at a few post offices, Alki Beach, and then possibly popular destinations — following coronavirus guidelines, of course.

When asked what the meaning behind the balloon is, Castro responded that while traveling, he and his wife were often asked if they voted for Trump. “The world is baffled along with the majority of America that this is what we voted in as Americans. We were embarrassed.”

“In 2019, we had our son Bodhi. Perspectives changed. What world would he grow up in? We always think that if we were around when Hitler rose to power, we’d stop him, but now I’m not so sure. I do hate using the Hitler cliche, but it’s the best we have,” he said. “I also sell real estate and part of owning a home is the country you reside in. I never heard so many people half-jokingly say they want to leave the country.”

“I had to do something and I always start with data. The numbers showed young Americans don’t vote. I thought that there has to be a way to get people’s attention, and the balloon seemed like the way to go. I also understand that Trump supporters are genuine in their beliefs and that they are also Americans who agree to disagree. I just want Americans to vote – left, right, socialist, independent, and anything in between.”

“If 30 years from now you look back and say, ‘What did I do to stop Trump?’ I hope that I may have helped push the needle just a bit. If nothing, I’ll have a picture with me, Bodhi, and a stupid balloon.”

If you see Castro and his balloon out and about, be sure to give him a high five and let him know that you’ve registered to vote at olvr.votewa.gov.