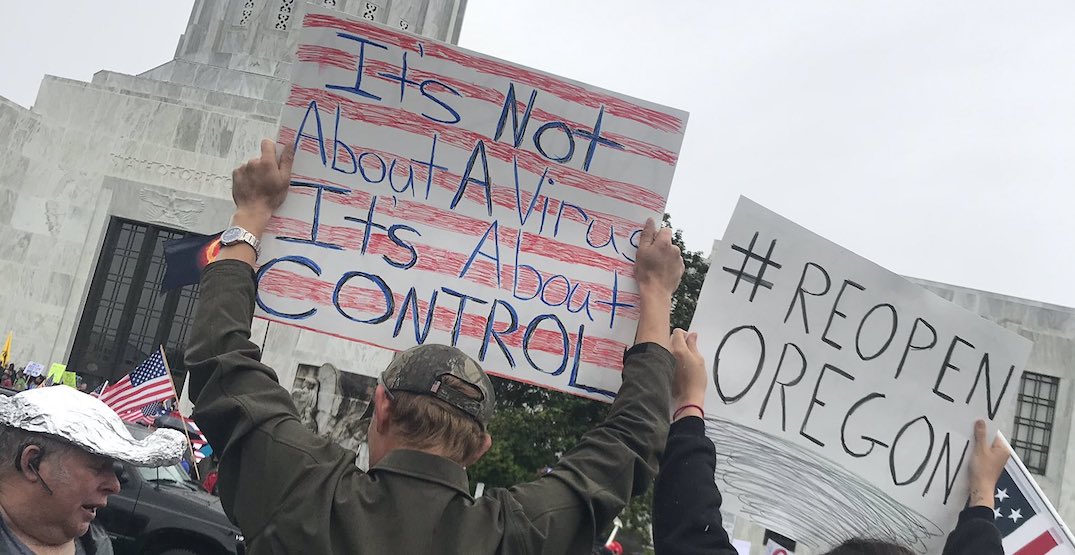 Despite the pouring rain, thousands of Oregonians came out in front of the Capitol in Salem to protest Friday’s announcement that cities in the state will not be ready to slowly reopen until at least May 15.

“I want to be clear that we will not be able to open Oregon quickly, or in one fell swoop,” said Oregon Governor Kate Brown during Friday’s press conference.

The official Twitter account of the Oregon Republican Party, the Party of Freedom posted a message shortly after, urging Oregonians and businesses to reopen on Monday, May 4.

The Republican party also urged Oregonians to gather on the steps of the Capitol at 12:00 pm on Saturday in protest.

Thousands of supporters showed up, and footage from the event was shared on social media.

Open carry protesters outside the state Capitol today during the Reopen Oregon rally. One has the boogaloo civil war meme on his backpack pic.twitter.com/mNLm1sxREG

There’s really something incredible about a sea of strangers, with a common goal, coming together to love our Great Nation. Proud and grateful Americans, fighting for the future of this Country. God bless America! 🙏🏻🇺🇸#ReOpenOregon #Trump2020 #WWG1WGA #FlushBrownDown #QAnon pic.twitter.com/cq58ju7fRC