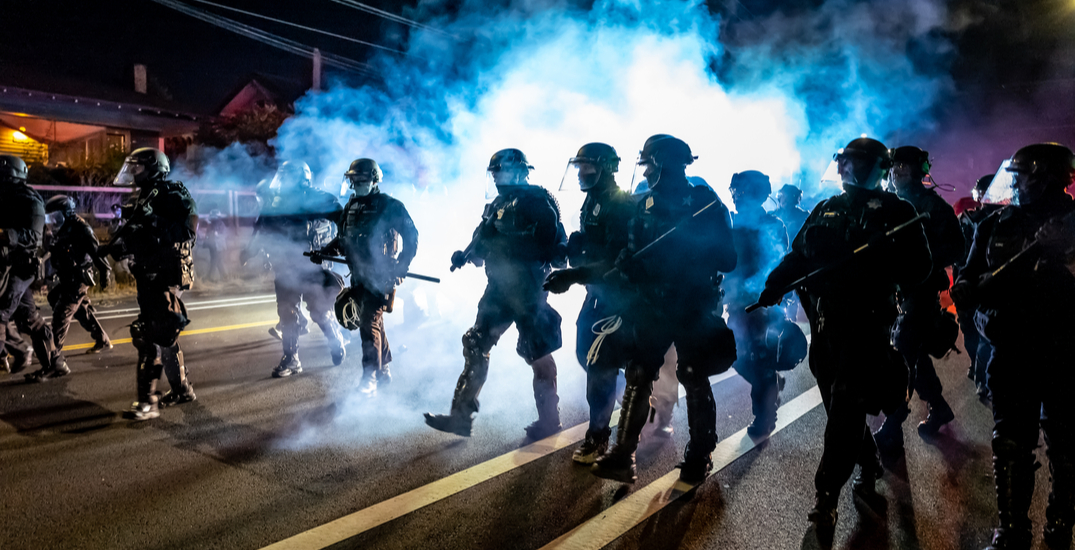 What started as two peaceful demonstrations with a combined total of 600 people has been declared a riot.

Officers are ordering people to leave the area or possibly be subject to arrest, citation, or use of force including tear gas.

The mass gathering in downtown Portland is still declared a riot. Leave the area now. Failure to adhere to this direction may subject you to arrest, citation and or/use of force including, but not limited to, impact munitions and/or tear gas.

The department has shared two photos of seized items on Twitter including commercial-grade fireworks, hammers, spray paints, projectiles, and more.

These are some of the items law enforcement has seized tonight from custodies. Commercial grade fireworks, hammers, spray paint. pic.twitter.com/L4paG54Tqo

Here’s a look at Downtown Portland:

#Portland #PDX
The PPB Rapid Response Team is being tailed by a convoy of Oregon National Guard Humvees as they assist law-enforcement in downtown Portland with the rioting.

A group of protesters and press including myself have been kettled pic.twitter.com/h4MF6Dr6zc

This is the scene at SW 5th and Washington in downtown Portland, OR, right now. Unified Command is everywhere. People are playing music.#PortlandProtest #PortlandProtests pic.twitter.com/1XZuzDFsp3