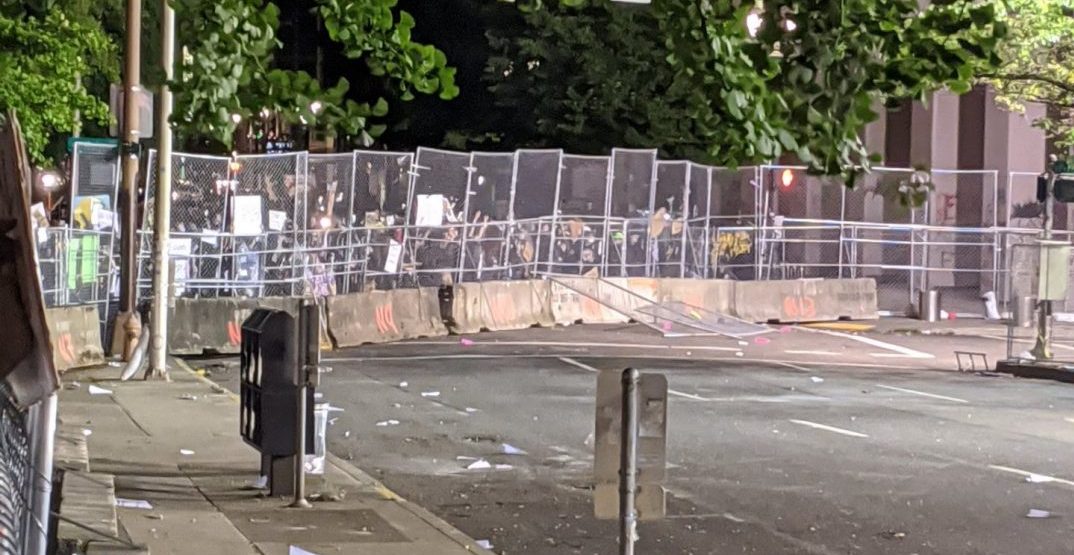 On Wednesday night, hundreds of protesters took to the fencing outside of Portland’s Federal Courthouse on SW 3rd Avenue, dragging it down the street in order to set up a police-free zone, according to the Portland Police Bureau.

Now in the third week of protests following the death of George Floyd at the hands of law enforcement in Minneapolis, Portland has joined cities from all over the world in standing up against police brutality and systemic racism in systems intended to protect citizens.

In Minnesota, the state is working on defunding the police departments to a reasonable level, and Seattle recently made headlines with CHAZ (the Capitol Hill Autonomous Zone), where local protesters set up a multi-block, walled-off zone, barring police from being in the presence of demonstrations.

On Wednesday night, some protesters decided to take ownership of the fencing, installed by the police in order to keep some buildings safe, and used it to block off portions of the streets downtown.

The construction of Portland’s “autonomous zone” lasted only a few hours before the cobbled-together fence was mostly abandoned by protesters in the early morning hours, according to police.

The group which had gathered in the area of SW Main ST and SW 3rd Ave dispersed on their own at about 2:00 a.m.

For several weeks, the fencing has been separating the public and law enforcement during demonstrations. It’s been seen in numerous clips of the protests and is the topic of multiple police loudspeaker announcements.

And the fence isn’t going to just lie down and take the injustice, as it has plenty to say.

Yo, @PortlandPolice, people don’t *live* in jail. They’re caged there. They’re neglected and dehumanized there. The people are gonna abolish prisons when they’re done abolishing me and you. https://t.co/WW42mJDf67

The fence continues to be a sticking point for law enforcement and protesters alike, constructing a literal divide between movement and cause.

There are persons coming over the fence. We need all persons to remain on the west side of the fence. The area inside the fence on SW 3rd Ave, between SW Main Street and SW Maddison Street is closed. If you enter you are subject to arrest.