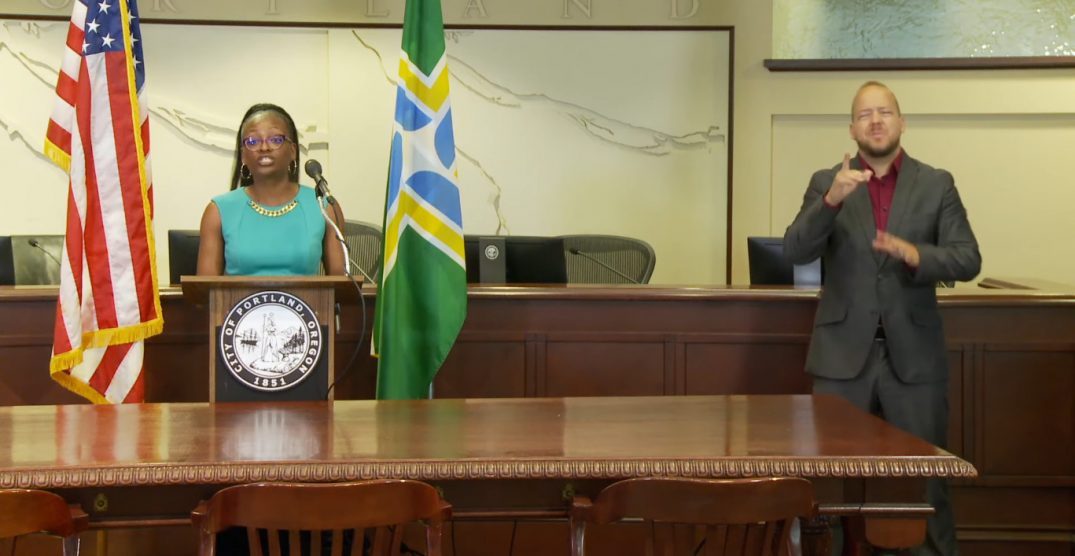 During a press conference held Friday morning with Mayor Ted Wheeler, Portland’s Director of the Office of Equity, Dr. Markisha Smith, had some sharp words for the public, and for leaders around her.

“First, be open and accepting of the fact that white supremacy and white privilege are a reality that has shaped the treatment of Black people from the very beginning,” said Dr. Smith.

“This isn’t about ‘I have Black friends or support Black businesses,'” Dr. Smith continued. “This is about the undeniable fact that our country was built on the ugly foundation of slavery, and dare I say, we’re still operating with plantation-style mentalities and realities.”

There have been seven days of protests in and around the city following the killing of an unarmed Black man, George Floyd, at the hands of law enforcement on May 25.

Dr. Smith also pointed out that Friday would have been the birthday of Breonna Taylor — a Black woman and first-responding EMT who was killed in her own home by police investigating a narcotics charge in Louisville, Kentucky.

“Understand that we have systems that function as they were intended in their original design,” Dr. Smith said. “And we must be about the business of tearing them down and replacing them with ones that are equitable and just.”

“If you’re a white person, you need to do your work,” she added.

“Be willing to have tough conversations about race and racism. Stop taking detours. “We can no longer afford to hold space for emotions and conversations that only center whiteness.”

Mayor Wheeler, who recently moved to dissolve the police force presence in Portland’s public schools, took to the podium to say that more must be done and spoke about signing former President Obama’s pledge for leaders to take integral looks at their current use of force policies.