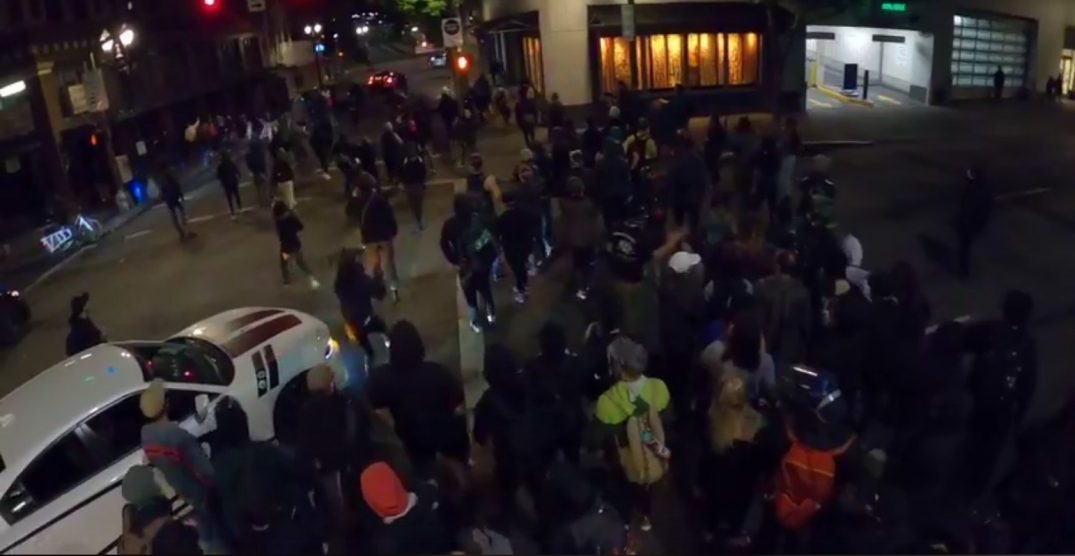 Day 19 of the Portland protests in support of the Black Lives Matter movement escalated on Tuesday after a motor vehicle drove through crowds of demonstritors near SE 3rd and Alder.

According to videos shared on social media, a vehicle drove through crowds at a peaceful protest in Portland on Tuesday night, coming into contact with other vehicles in the vicinity in an attempt to escape the scene.

Portland police identified the driver as 27-year-old Anthony Eaglehorse-Lassandro, who was later stopped and arrested for Felony Hit and Run, Reckless Driving, and Possession of a Controlled Substance.

PPB Officers responding to SE 3/Alder to assist @PDXFire get to two patients who were struck by a vehicle. Officers are trying to help get medical attention to those in need.

“A vehicle encountered the crowd near Southwest 3rd Avenue near Alder Street,” reads the update from the Portland Police Bureau. “The vehicle struck several demonstrators and left at a high rate of speed, driving the wrong way on streets.”

“Officers located three patients and were able to provide support while Portland Fire & Rescue medics tended the patients. Two were transported by ambulance as trauma entries; another was taken by personal vehicle for treatment.

“All injuries [are] believed to be non-life-threatening.”

Nightly livestream Portland protests hosted by Eric Greatwood captured the aftermath, though his camera was not facing the initial incident (around the three-hour-and-32-minute mark).

One Portland lawyer, Kevin Parks, shared his video on social media. Following the events, Parks says law enforcement may have indicated more than one vehicle was involved.