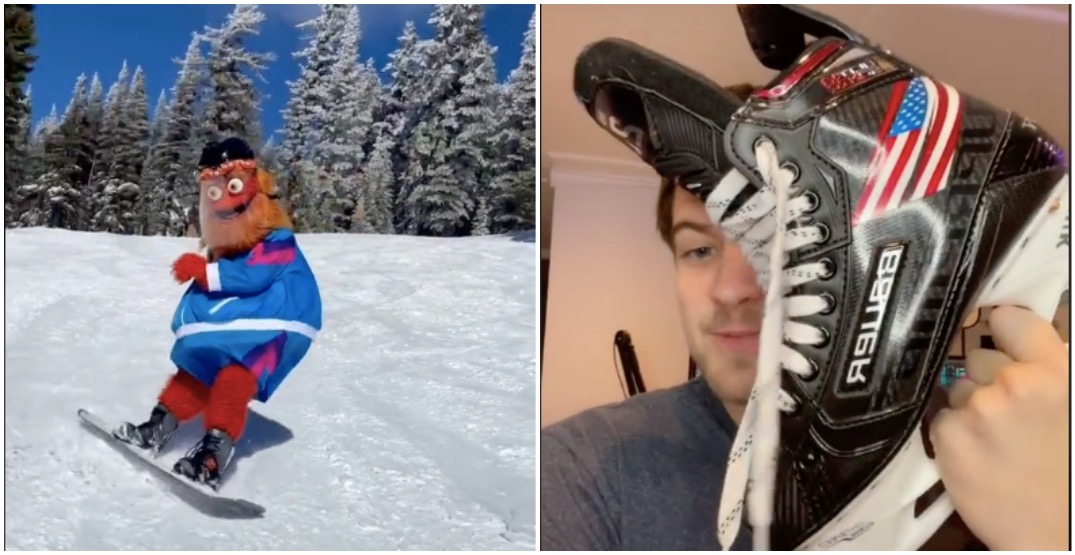 Since the start of lockdown last year, many have been turning to new ways to entertain themselves. Cooking, learning a new skill, or finishing a home project, people have found ways to fill in the time while staying at home.

The hockey world is no different. Some have even taken their talents to TikTok, where they can share their lives and how good of a dancer they are.

From making some new bird friends, silky dekes, or shredding a mountain, here are some of the best hockey players and personalities to follow on TikTok.

LA Kings prospect Matt Luff is probably the least-known name on this list, but he has some awesome TikTok videos. His most famous video includes him and his friends jousting against one another, which has over two million views.

Former Toronto Maple Leafs and current New Jersey Devils defenseman Connor Carrick could become a professional dancer after his hockey career. He has solid moves and is genuinely funny.

Stanley Cup champ Mathieu Joseph posts some unique content. He’s very likable and will even make fun of himself, and he deserves way more than just 14,000 followers.

P.K. Subban has always been a very energetic and humorous player during his time in the NHL. In Montreal, Nashville, and now New Jersey, he takes his fun-loving personality with him. He takes that same energy to his TikTok account, where he has lots of fun with his dog and working on his skiing skills.

@alwayshockeySuch a beautiful day today! Spent it outside messing around in the shooting spot!🏒 ##zacbell♬ original sound – Zac Bell

Zac Bell is a fantastic TikTok personality who showcases a variety of hockey trick shots. He is also a Guinness World Record holder for his stick-handling prowess.

Nasher is a Youtube and Twitch star who is also a Bauer athlete. He posts various videos featuring him showing off his silky mitts on the pond, or brand new custom Bauer skates.

The self-proclaimed Sports most unreliable broadcast team: Olly Postanin & Jacob Ardown have some great content. The best part? The fact that they are ready to try anything on the ice, no matter how painful it looks.

Pavel Barber is a YouTube and stick-handling master. Many of his videos are so impressive to see the variety of dekes he can pull off in so many different places. He also finds innovative ways to showcase his immense talent, as seen with his glow-in-the-dark hockey video.

Brendan Gallagher’s videos include quoting Jake Peralta from Brooklyn 99, to making a bird friend. Gallagher knows how to use TikTok, and he does it very well.

Since Gritty became the mascot for the Philadelphia Flyers, he has become an internet darling. So it is no surprise to see him at the top of this list. It is impressive how Gritty can move so fast and is so talented at seemingly everything he does.