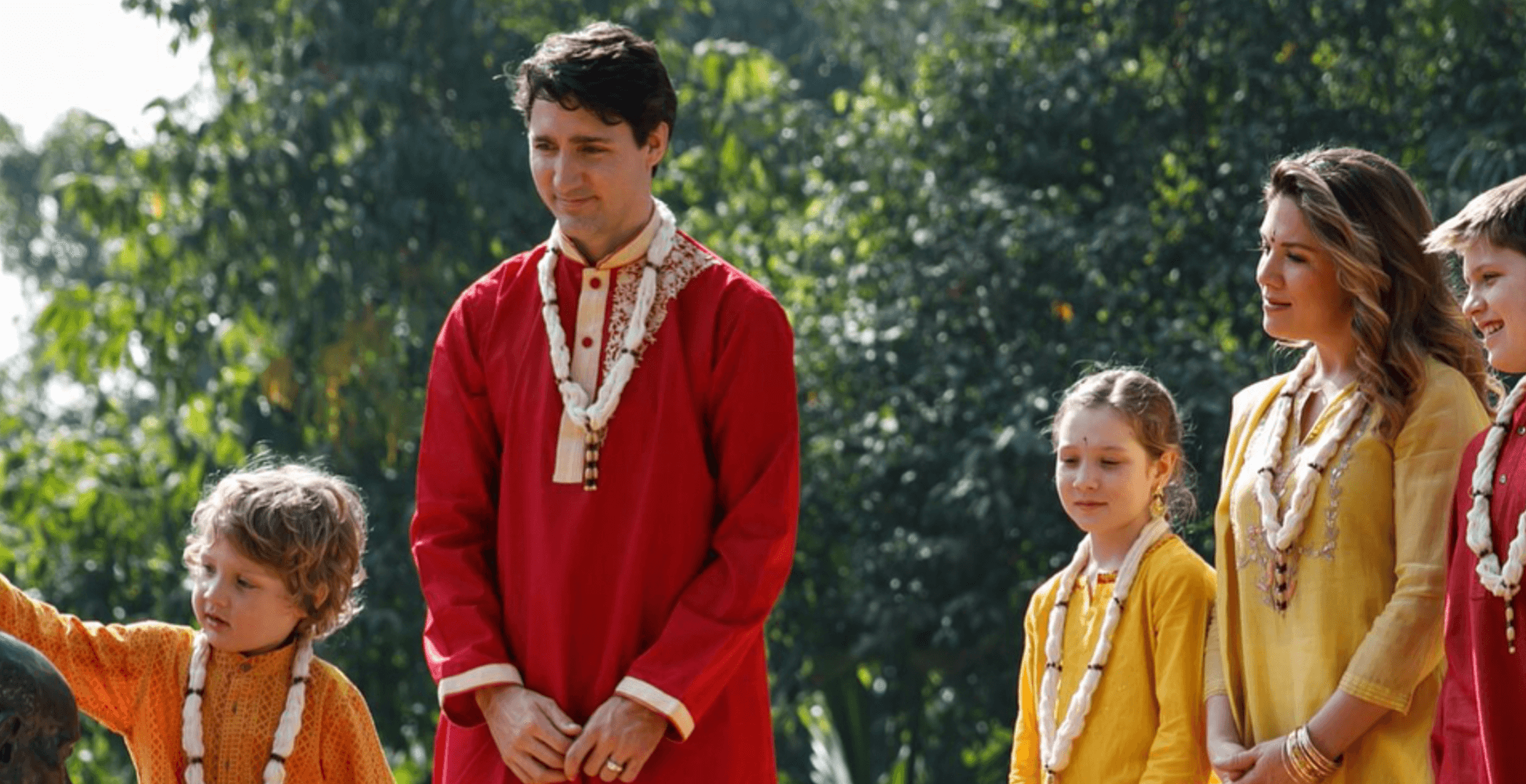 Prime Minister Justin Trudeau’s week-long trip to India is wrapping up, and he has been showing off his traditional outfits and gestures.

While Trudeau may want to show India he knows how to “fit in,” some Indian people just aren’t having it.

The Trudeaus landed in India earlier this week and stepped off the plane with their palms pressed together -which is a traditional greeting. This was a nice, respectful gesture that many people in the country probably appreciated.

#TrudeauInIndia Touchdown in India for a weeklong visit to discuss areas of mutual cooperation. @JustinTrudeau came as a child when his father Pierre Elliot Trudeau was PM & today @JustinTrudeau is PM and brings his children. @CanadainIndia pic.twitter.com/wav7ZXpFcc

But then, the Prime Minister started going a bit overboard with his attempt to show India that he really, really, likes their country.

At a meeting with Bollywood’s top stars, such as Shah Rukh Kahn, Trudeau came decked out in a bedazzled traditional Sherwani while Khan sported a black blazer and pants.

Tonight, we celebrated stronger ties & new co-production opportunities between Bollywood and the Canadian Film Industry. And who better to help than @iamsrk himself… Great to meet you! 🇮🇳🇨🇦 pic.twitter.com/1OcwsA9lMS

Here he is again with Indian film star Aamir Khan, who also opted for a black sportscoat and pants:

.@aamir_khan – our delegation was very happy to meet you! Thanks for joining us to celebrate a brighter future for the film industry in both our countries. pic.twitter.com/KFdEXssoku

In fact, Canada’s very own Sikh Defense Minister, Harjit Saajan, also showed up to the Bollywood event in a blazer.

On various stops on this trip, Trudeau has made sure his photo-ops show the world that he’s in India, doing very “Indian things.”

But even Indian people are a little taken aback by Trudeau’s wardrobe choices.

Is it just me or is this choreographed cuteness all just a bit much now? Also FYI we Indians don’t dress like this every day sir, not even in Bollywood. pic.twitter.com/xqAqfPnRoZ

I’m Indian and even *I* don’t have so many kurtas. 😉#cdnpoli #TrudeauInIndia pic.twitter.com/Ceq5bacSI6

I love the Trudeau but cannot understand why he’s dressed like he’s at his own Indian wedding. https://t.co/lBdoLJNtQr

Even if Trudeau was an Indian groom at his wedding reception he’d look ridiculously overdressed. https://t.co/1tQWMOEEKt

But others don’t seem to mind that the Trudeau is trying to embrace India’s diverse cultures.

I’m not sure what’s all the fuss about. Obviously, someone else has created their wardrobe. They have trusted that advice and despite some of it being over the top, I think it’s nice of them to wear it. In any case, I think they’re all looking really good. Get over it.

Absolutely love it. Shows the respect they have for the country they are visiting. We may not dress like this everyday but no harm in them doing this for a few days 🙂

Sir if they want to pay respects to the culture of our country why should one be disturbed. It’s a moment they want to enjoy with India and that’s it. https://t.co/BJDeZQAfFm

Nice I like ths fact tht a great leader @JustinTrudeau respects our culture n he dresses up in our traditional clothes @iamsrk https://t.co/SLX5PJfMD4

Not the best trip for Trudeau

While Trudeau has been wearing bedazzled groom’s outfits and posing with prayer hands in almost every picture, it should not distract Canadians from the lack of political and economic gain from his India trip.

So far, Trudeau has yet to meet with any senior Indian politicians and he has only announced a partnership worth $1 billion, which the government says will lead to the creation of more than 5,800 “well-paying middle-class jobs for Canadians.”

Indian Prime Minister Narendra Modi, has also given Trudeau a cold shoulder, only choosing to meet with him on one of the last days of the trip.

Much of India’s icy political reception to Trudeau has to do with their belief that Canada’s Liberal government is sympathetic to Sikh extremists who are fighting for the state of Punjab to become its own independent territory known as Khalistan.

And things have only gotten worse for Trudeau after CBC reported Jaspal Atwal, a former member of a Sikh separatist group convicted of the attempted assassination of an Indian state cabinet minister visiting Vancouver Island in 1986, was invited to attend an event hosted by Canada’s high commission in India.

Canada’s relationship with India has taken on a new strain with the development of Atwal being invited on the trip. Moreover, the Indian government’s view of Sikhs in Canada and alleged involvement with extremism has been magnified.

So, it’s probably safe to say this trip definitely has not been Trudeau’s best.

But hey, at least he’ll come back home with a new wardrobe.