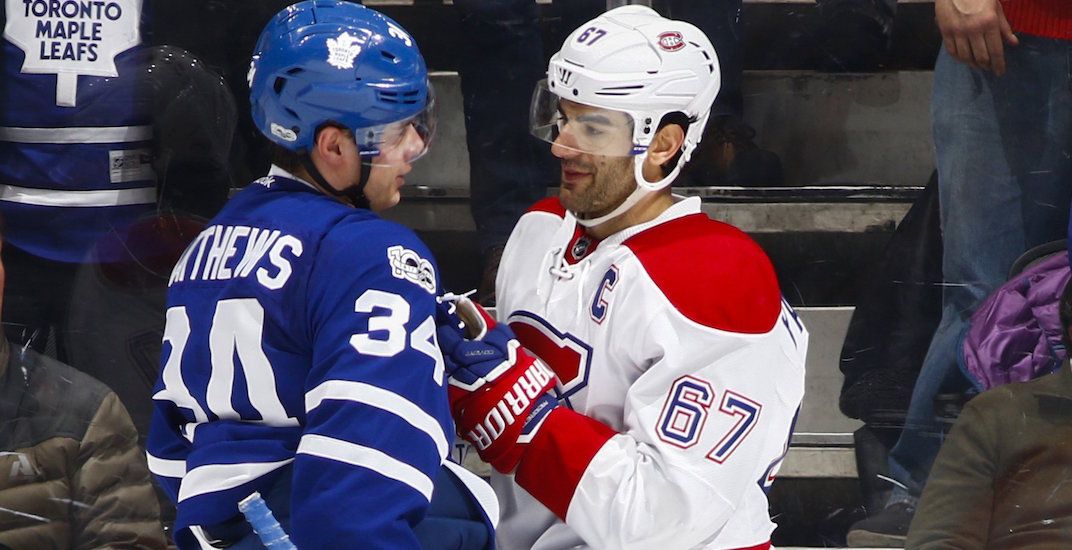 The oldest rivalry in hockey will come to fruition for the 737th time on Saturday night between the Toronto Maple Leafs and the Montreal Canadiens. It’s early in the season, but there’s lots on the line.

For the Habs it’s a 14-game winning streak against the Leafs that dates back to January of 2014. For the Leafs, it’s a chance for a new era to start a new streak of their own.

Social media wasn’t around when these two teams first played in 1917 but it plays a big part in today’s rivalry. Habs fans will quickly remind Leafs fans that they’ve beat them 14 times in a row, or toss out a quick ‘1967’ referring to the last time the Leafs won the Stanley Cup. Toronto fans will immediately shoot back with a classic ‘you’d be nothing without Carey Price’ or the ever so famous ‘stop living in the past.’

There are plenty of moments that define this rivalry, but here are the top five from the past decade or so that will stick out in both fan bases minds.

The last time these two teams met in regular season play was last February at the Air Canada Centre in Toronto. The Leafs entered the game four points behind the Habs for first place in the Atlantic Division. Auston Matthews netted his 30th in the third period sending the game to OT.

A perfect lead pass from Tomas Plekanec combined with a pinching Frederik Anderson leads to Andrew Shaw keeping the streak alive for Montreal.

Opening night lived up to the hype, at least early on, between the Leafs and Habs in 2013.

The game had three fights in the first two periods, one of which was George Parros squaring off with Colton Orr.

The two heavyweights would drop the mitts again in the third but things ended very different the second time around. At the end of the fight Orr fell backwards while still holding onto Parros’ jersey. This resulted in Parros’ head slamming onto the ice and knocking him out cold. Orr immediately called for the Canadiens training staff and Parros left on a stretcher.

Toronto went on to win the game 4-3, but fans witnessed a fight that may have changed the role of the enforcer in hockey forever.

April 7, 2007, Montreal and Toronto meet on the final day of the regular season both with 89 points in the standings trying to clinch the eighth and final playoff spot in the Eastern Conference.

The Leafs led 3-1 early in the second but the Canadiens stormed back thanks to a Michael Ryder natural hat trick (and a goal from Chris Higgins) making it 5-3.

The heartbreaker for the Leafs came the next day when the New York Islanders squeaked out a shootout win, giving them one more point than Toronto. The Leafs wouldn’t make the playoffs again until 2013.

With overtime winding down, the Canadiens went on the man advantage and that’s all (now) captain Max Pacioretty needed as he took a beautiful feed from Andrei Markov and sniped it up and over Jonathan Bernier sending the Bell Centre into a frenzy.

It was the start of the streak for the Habs.

In the last meeting between Montreal and Toronto in 2006, Kovalev was carrying the puck into the offensive zone. Tucker flew by and stuck out his elbow connecting with Kovalev’s face.

Instead of going after Tucker immediately, he gets the puck again and circles. Kovalev then intentionally loses the puck and decks Tucker with what might be the most vicious elbow I have ever seen. Tucker went down like a sack of potatoes and the rest is history. Full-out line brawl between two teams that absolutely hated each other.

Saturday is just another chapter in this historic rivalries book. These two franchises have met over 700 times but it doesn’t matter, because all the Leafs and Habs care about is the next one.