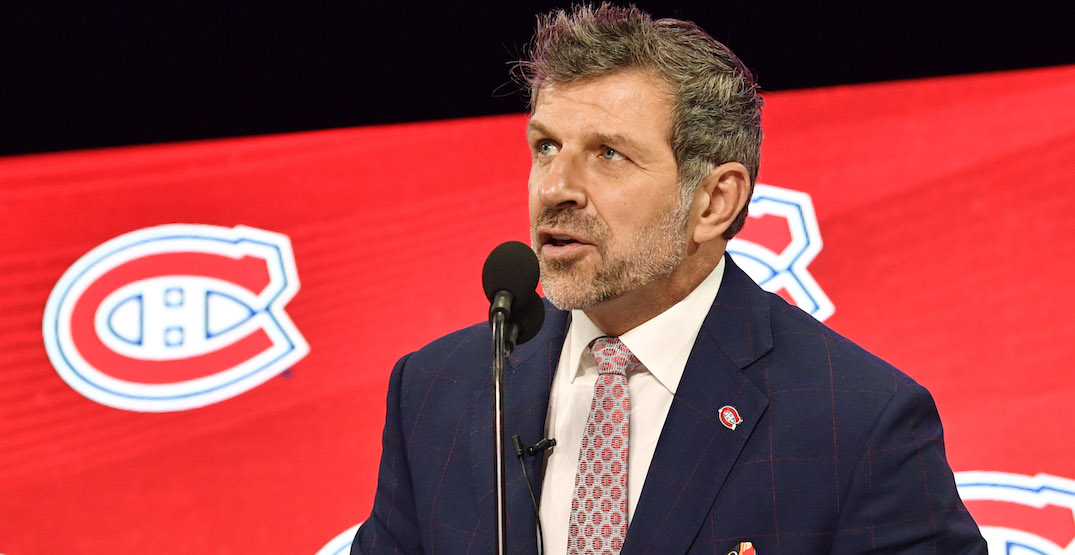 Publicly, Montreal Canadiens GM Marc Bergevin has been kicking the can down the road for a while now.

Sure, he’s sort of trying to win now, but only so hard. There’s a future to think about, after all, and that’s what he’s really concerned with. So when they don’t win now, it’s really not that big of a deal.

Bergevin’s always been very careful not to let expectations get too high. And not just when it comes to his team’s performance. Just a couple weeks ago he was telling reporters it was very unlikely he would do anything before the trade deadline and that he had no space to work with.

Marc Bergevin says it's "very unlikely" the #habs do anything before April 12 trade deadline. Adds that he has no cap space and would need to find a money-in/money-out transaction.

The next day, he traded for Eric Staal. I guess that deal came together quickly.

This isn’t a bad PR strategy for a general manager, but you can only get away with it for so long, especially in Montreal. At some point, he’s going to have to push a healthy amount of his chips in on the present. This seems like as good of a time as any.

This isn’t to say the Canadiens are necessarily a team with a closing window, though the likes of Shea Weber, Jeff Petry, and Carey Price certainly aren’t getting any younger. Based on Bergevin’s rhetoric the last few years, their window should just be opening. But the Habs have been presented with some favourable circumstances this year that aren’t likely to repeat themselves.

We’ll start with the state of the North Division. The Canadiens pretty much have a playoff spot locked up already not so much because of how great they’ve been, but because being amongst the top four of Canada’s seven NHL teams this year didn’t end up being that hard.

The Ottawa Senators are openly rebuilding. The Calgary Flames are becoming a mild disaster. The Vancouver Canucks’ season had become a mess long before their room was hit by a serious COVID-19 outbreak.

The overall NHL standings should be taken with a serious grain of this year due to the fact that teams are only playing against a quarter of the league. That said, making the playoffs in the North Division merely requires Montreal to beat out Vancouver, Calgary and Ottawa, a trio that headed into Friday ranking 24th, 27th, and 30th in the NHL in points percentage, respectively.

Purely for competitive reasons, it wouldn’t be surprising if the Canadiens were one of the teams lobbying the NHL to keep the all-Canadian division together moving forward, but that doesn’t sound likely to happen. Assuming that by the time next season starts the border restrictions and quarantine periods have been eliminated — and boy, they better be — the Habs will likely find themselves returning to a division with the Toronto Maple Leafs, Tampa Bay Lightning, Florida Panthers, and Boston Bruins.

In other words, a much tougher path to the postseason. Toronto, Tampa Bay, Florida, and Boston rank 3rd, 4th, 7th and 11th in points percentage this year, respectively. Montreal ranks 14th.

It’s easy to imagine Bergevin not wanting to give up too much to add to the team at next year’s trade deadline because there will be a very real possibility of them missing the playoffs entirely in the Atlantic Division. Which will then lead to another version of this sort of quote.

Lebrun: “Marc Bergevin hopes to make another deal or two before Monday, as long as he doesn’t have to mortgage the future for it.” #Habs

Marc Bergevin is excited about the future of the Canadiens, and was unwilling to mortgage that future for short-term solutions in free agency.

Then there’s the matter of the broken thumb that Brendan Gallagher suffered during Monday’s 3-2 overtime win against the Edmonton Oilers. The six-week timeframe for his recovery likely sidelines him for the rest of the regular season and perhaps even for the start of the playoffs. The injury is obviously not good news for the Habs, but the silver lining is that they were able to put him, and his cap hit, on long-term injured reserve.

This could open the door for Bergevin to make another addition. Then if Gallagher is able to return during the playoffs, the salary cap won’t matter anymore. While Montreal is still tight up against the cap even after putting Gallagher on LTIR, Bergevin can get something done if he really wants to, whether it’s by getting a trade partner to retain salary or sweetening the deal to get them to take, say, Paul Byron’s contract off their hands.

Bergevin has never traded a first-round pick away as GM of the Canadiens, which wouldn’t be such a bad thing if the nine first-round picks he’s made since 2012 had more than a total of 19 points on this year’s team, all of which are Jesperi Kotkaniemi’s. First-round picks are precious assets in the NHL, but if you aren’t very good at using them to take players who will eventually be good, maybe it’s time to try trading one for a player you already know is good.