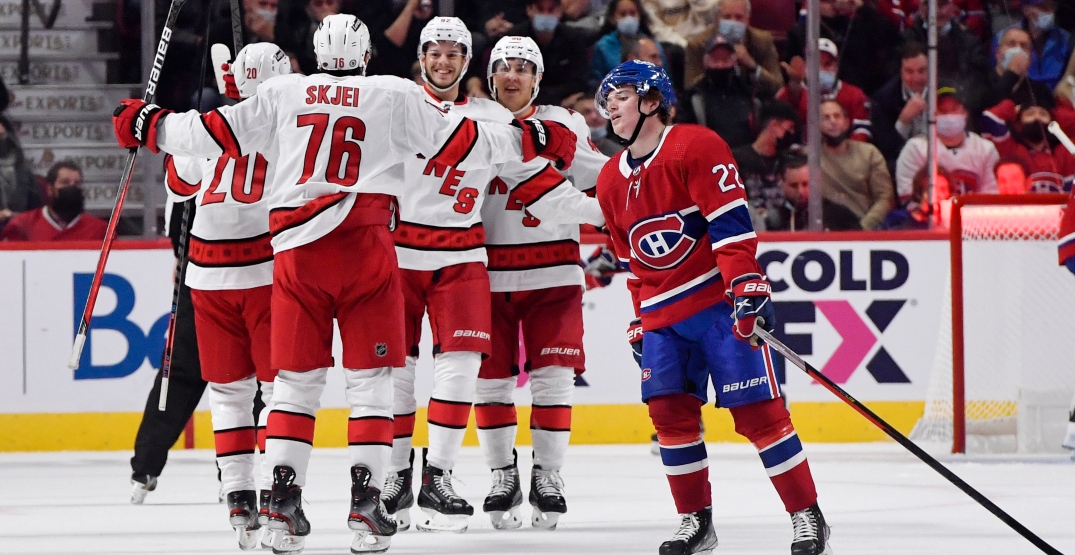 To say it’s been a tough start to the 2021-22 season for the Montreal Canadiens would be an understatement.

They’re 1-6-0 heading into play on Thursday. They haven’t scored more than one goal in any of those six losses. They have the worst goal differential in the Eastern Conference. They got dummied by an expansion team on Tuesday.

Other than that, things are going great.

Really the only good news for the Canadiens at this point is there’s still time to save their season. They’re only seven games into their 82-game schedule. There are a whole lot of things they’re going to need to fix in order to do that, though. These are six of the reasons the Habs have gotten off to such a brutal start.

We’ll start with the obvious.

It is very hard to win games with one goal. It’s impossible to win with zero. The Habs have scored one or zero goals in six of their seven games, and their record is 1-6-0. You have to score to win, and Montreal isn’t scoring. That’s the biggest problem.

There are plenty of culprits behind the team’s offensive woes. Nick Suzuki, Cole Caufield, Brendan Gallagher, Josh Anderson, and Joel Armia are all among the Canadiens who have yet to score their first goal this year. Which means they all have fewer goals in Habs games this season than Jesperi Kotkaniemi does.

Tyler Toffoli, their leading scorer from last season, has just one goal and one assist through seven games.

Jeff Petry had an outstanding offensive season from the back end a year ago, scoring 42 points (12-30-42) in 55 regular season games. He doesn’t have a point yet this season.

That’s far too many goose eggs from far too many important players seven games into the season. It’s just simply not going to cut it if the Canadiens hope to have any sort of success. These are the guys the team is counting on to provide offence. They have to step up.

Of most concern among the players off to a slow start may be Gallagher. Fans seemed to give him a bit off a pass for his lack of offensive production in last year’s postseason — just two goals and four assists in 24 games — because everyone knew he was playing through a thumb injury that caused him to miss the final 21 games of the regular season.

Gallagher had all offseason for his thumb to heal, though. He’s also in the first year of a six-year contract extension that carries a $6.5 million cap hit. He may be struggling to adjust without his regular linemates from the last few years, Phillip Danault and Tomas Tatar, but the Habs need him to start producing.

2. They aren’t getting enough shots

Last year the Habs averaged 31.2 shots on goal per game, which ranked seventh in the league. So far this year they’re averaging just 27.4, which ranks 28th.

Before the season, I laid out the case for why the Canadiens were going to make the playoffs this season.

Not much of what I wrote is aging well so far. Perhaps the point that’s looking the worst is that I said I thought special teams could be a strength for Montreal.

That has, uh… not been the case.

Montreal’s power play ranks 31st in the NHL with just an 8% success rate, better than only the Vegas Golden Knights, who somehow haven’t scored a power-play goal yet.

You know what might be helpful for a team with a struggling penalty kill? Not taking so many penalties.

Montreal has taken 27 minor penalties through seven games. That’s the eighth-most in the league and an average of nearly four per game.

That combination of poor discipline and poor penalty killing has seen the Habs allow nine power-play goals in just seven games so far this year, which is tied for the most in the league.

This is far from the Canadiens’ biggest issue. You can’t really blame the goalies much when you’re scoring one goal every game. But that doesn’t mean the goaltending has been good.

Again, is this their biggest problem? Not even close. But does it need to be better? Yes. No one knows when Carey Price is walking through those doors. In the meantime, Allen has to do his part to help keep this ship above water. This is a team that could use a goaltender stealing them a game or two right about now.

These are the five goals the Seattle Kraken scored against the Canadiens on Tuesday. You can decide for yourself how much blame you think Allen deserves on each of them.

RUN THAT BACK TURBO!!! pic.twitter.com/yMB0ebCaX3

things you love to see: this goal by donato ⬇️ pic.twitter.com/of6DfRv69W

Allen didn’t look good on Yanni Gourde’s goal, but his defence hung him out to dry on that play, too. Allen may be guilty of not stealing any games for the Habs so far, but his teammates haven’t been giving him much help at either end of the ice.