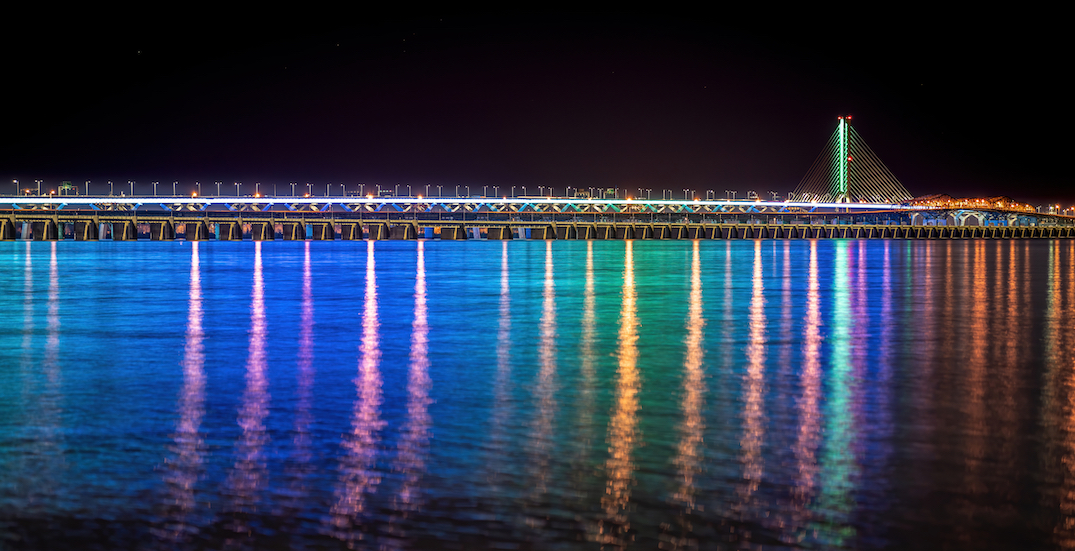 The Samuel De Champlain Bridge will continue to show rainbow-colours of support to Montrealers and Canadians throughout August.

Infrastructure Canada has announced the Champlain Bridge will continue light up every Sunday from 9:30 pm to 10:30 pm of next month.

“Citizens of the Greater Montreal area, and throughout the country, are moving toward a safe restart of our economy as we live through the COVID-19 pandemic,” says Catherine McKenna, Minister of Infrastructure and Communities.

“Every Sunday night throughout August the rainbow lights on the Samuel De Champlain Bridge will remind everyone how important it is to keep everyone safe while more people prepare to return to work, school, and recreational activities. Let’s stay vigilant and work together to build a more resilient and prosperous future.”

The Samuel De #ChamplainBridge will continue to display its rainbow lights each Sunday in August, from 9:30-10:30pm EDT, to show that #WeWillGetThroughThis https://t.co/t3m7MYrXOq#CaVaBienAller🌈#StrongerTogether#SamuelDeChamplainBridge pic.twitter.com/ucU4GUFnCw

In April, rainbows became a symbol of hope and solidarity throughout the city — and the world — as several buildings and structures across Montreal have joined in on the movement by lighting up their facades with a variety of colours.

Using the hashtag #cavabienaller on social media, landmarks throughout the city started to showcase creative ways to display rainbows with the slogan “ça va bien aller” (it’s going to be okay).

The slogan first started becoming popular on sidewalks and windows before the Samuel de Champlain Bridge and the Olympic Stadium joined the lighting display.