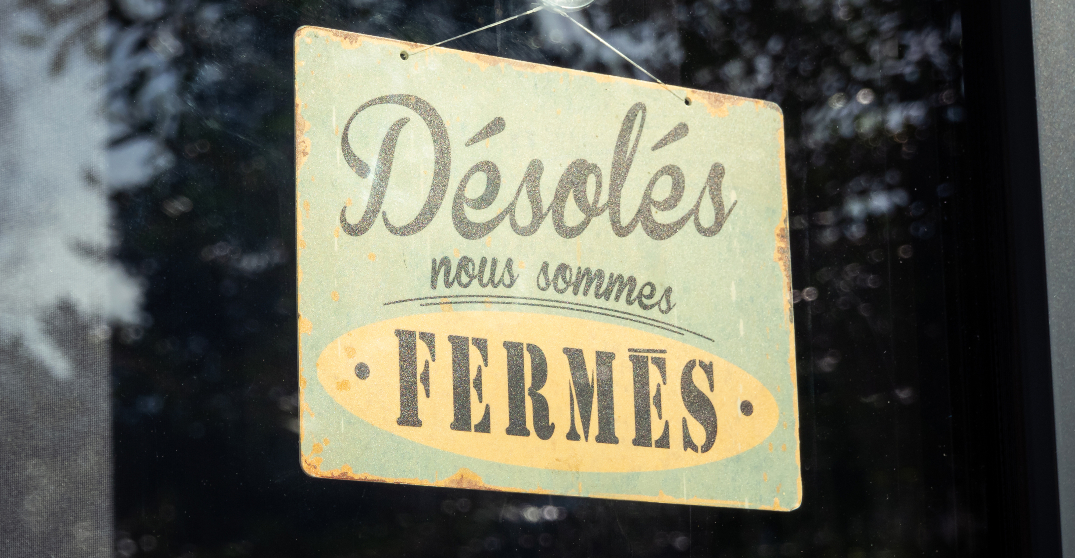 In normal times, Montreal has arguably some of the best restaurants, bars, clubs, and cafes in Canada (maybe even North America).

Unfortunately, these are not normal times.

The hospitality sector has been hit extremely hard throughout the COVID-19 pandemic, and Quebec’s latest wave of restrictions create another difficult hurdle to overcome.

Since March 2020, an alarming number of well-known Montreal restaurants have closed up shop for good. Here is a list of Montreal spots that have closed amid the pandemic.

After temporarily taking a break during the second wave of lockdowns, Grumman’s announced it would cease operations and held its last shift on October 19, 2020 — after ten years of operation.

In September 2020, L’Entrecôte Saint-Jean closed for good after 29 years of serving delicious steak-frites from its stylish French bistro on Peel.

After 83 years of business, Moishes, the iconic Jewish steakhouse in the Plateau, had to call it quits. Moishes had overcome World War II, the ice storm of 1998, and economic turmoil through the years, but the pandemic was too much to handle.

A fan favourite on the jazz scene, Montreal’s House of Jazz closed for good at the end of June.

House of Jazz opened in 1981, and the venue was ideal for live music.

Bar B Barn, the landmark BBQ spot, which has been in operation on Guy Street since 1967, wasn’t able to overcome the COVID-19 pandemic.

“COVID-19 has forced ownership to face a harsh reality the restaurant simply cannot continue to financially support itself,” said the restaurant’s owner. “Our building is too narrow, and our dining rooms too small for us to be able to safely and properly serve customers while still generating enough sales and revenue to keep the lights on.”

Le Blumenthal, a gorgeous bistro that opened in 2017 at the Quartier des Spectacles, announced it wouldn’t be able to overcome the government’s second lockdown in October.

Balsam Inn, the warm and cozy spot smack in the middle of downtown Montreal, was forced to close its doors after the second lockdown.

The popular Inn closed “as a result of difficulties related to the pandemic,” said the resto’s social media post.

Montreal’s most well-known Haitian spot Agrikol announced it would be closing its doors “for the foreseeable future” in December 2020 and hasn’t reopened.

In 2016, Arcade Fire band members Win Butler and Régine Chassagne opened the spot, and it was a popular location for foodies looking for Haitian grub.

The structure of La Pizzaiolle’s Plateau location was brought from Boston and reassembled in Montreal in 1993. After months of lockdown, the 1950s American diner-style restaurant was placed for sale and locked its doors for good.