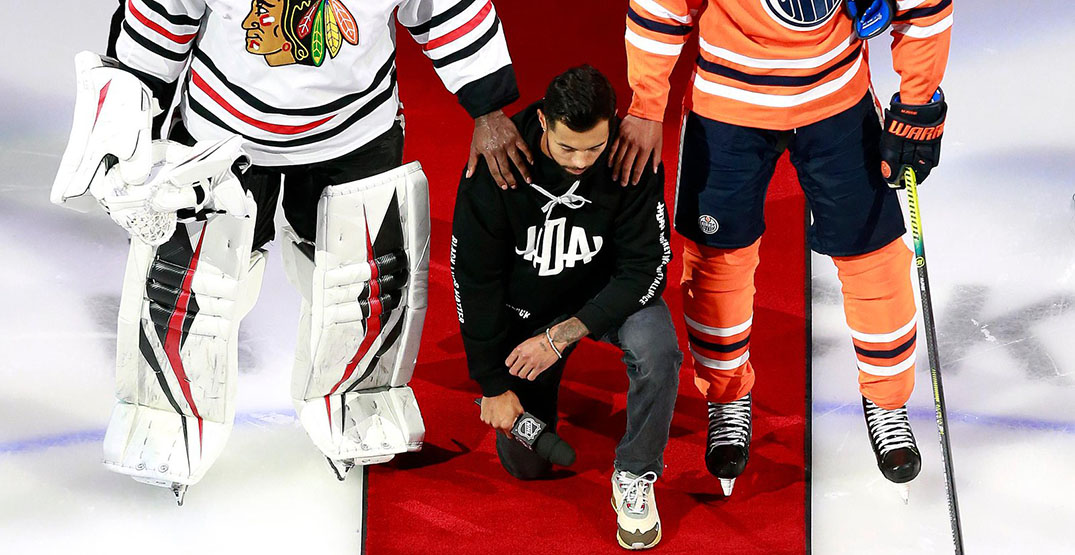 NHL player Matt Dumba gave an inspiring speech on racism and took the knee during the national anthem ahead of Saturday’s Blackhawks-Oilers game in Edmonton.

The Minnesota Wild player who was born in Saskatchewan called on players and fans to fight racism within hockey and beyond.

“Hockey is a great game, but it could be a whole lot greater,” he said. “And that starts with all of us.”

As Dumba kneeled on the ice, Malcolm Subban and Darnell Nurse placed their hands on his shoulders.

The moment was significant because of the culture of silence around issues of racism that exist in hockey.

During the coronavirus pandemic, Dumba said many people have woken up to how deeply rooted racism is within North American society.

“For those unaffected by systematic racism, or those unaware, I’m sure that some of you believe that this topic has garnered too much attention during the last couple months,” he said. “But let me assure you it has not.”

He went on to say racism is a “man-made creation” that deteriorates “our collective prosperity.”

As a founder of the Hockey Diversity Alliance, Dumba vowed to fight injustice so that all kids can feel comfortable when they lace up their skates. He concluded by affirming that Black Lives Matter, specifically mentioning that Breonna Taylor’s life matters.

When an issue is bigger than the game, we must speak out. #WeSkateFor Black Lives. pic.twitter.com/mgmMgRM8vI

Michael Buble sang the Canadian national anthem in Vancouver and the US one was broadcast over the speakers before the game got underway in Edmonton.