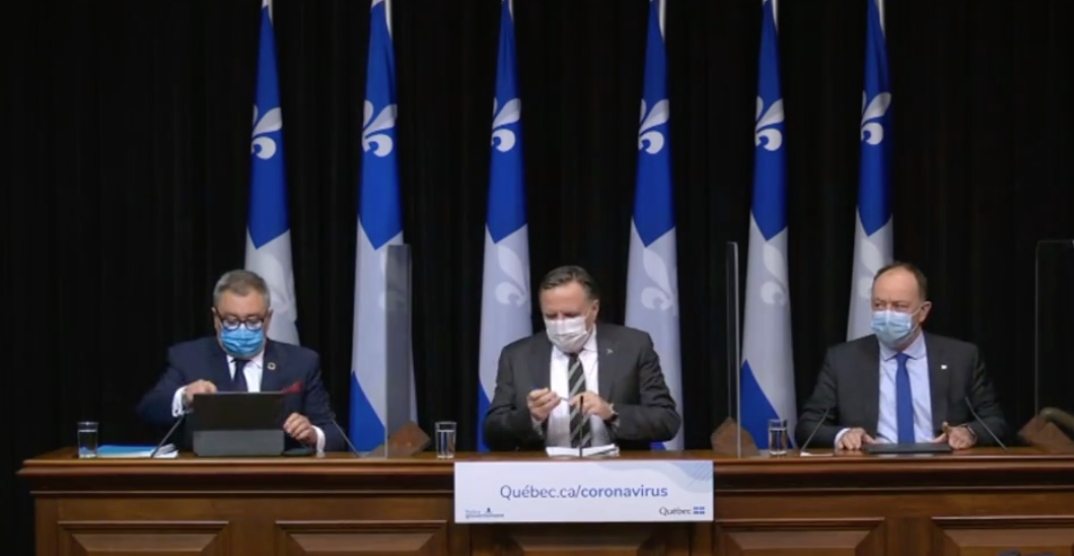 Premier François Legault has announced that four regions across Quebec will undergo a tightening of COVID-19 restrictions.

Legault says the government is “very concerned” over a rise in coronavirus cases over the past two days and has reverted them to red zones.

The following four regions will be reverted to red zones, as of Thursday, April 1 at 8 pm: Outaouais, La Capitale-Nationale (Quebec City), Bas-St-Laurent, and Chaudiere-Appalaches.

Accompanied by Health Minister Christian Dubé and the director of public health, Dr. Horacio Arruda, Legault said the four regions need to close all non-essential businesses, and their curfew will be reduced to 8 pm nightly.

Legault said those regions would be expected to follow all the COVID-19 protocols that occurred in January during the province’s second lockdown.

Legault said the government has “a lot of concerns” in Quebec City, Lévy, and Gatineau and will put them “on pause” for the next ten days, also forcing all non-essential businesses to close.

“Taking into account the situation is critical, and we have to act quickly,” he said.

The government will be closing schools, cinemas, museums, theatres, salons, and gyms in Outaouais, La Capitale-Nationale (Quebec City), Bas-St-Laurent, and Chaudiere-Appalaches. Houses of worship will be limited to 25 people, maximum.

“Generally speaking, what we are saying is the situation is deteriorating in those regions,” said Legault. “People have to stay home unless they absolutely have to go to work in-person.”

The premier said Quebecers can’t exclude that other areas “might be tightened” over the next few days, including Montreal.

He said the increases are “happening quickly” and blames the new COVID-19 variants, which he says “spread quicker.” Legault said some regions across Quebec look “pretty calm but with the variant, it could explode at any instance.”

He stressed that people can’t gather anywhere in Quebec, especially during the Easter long weekend.