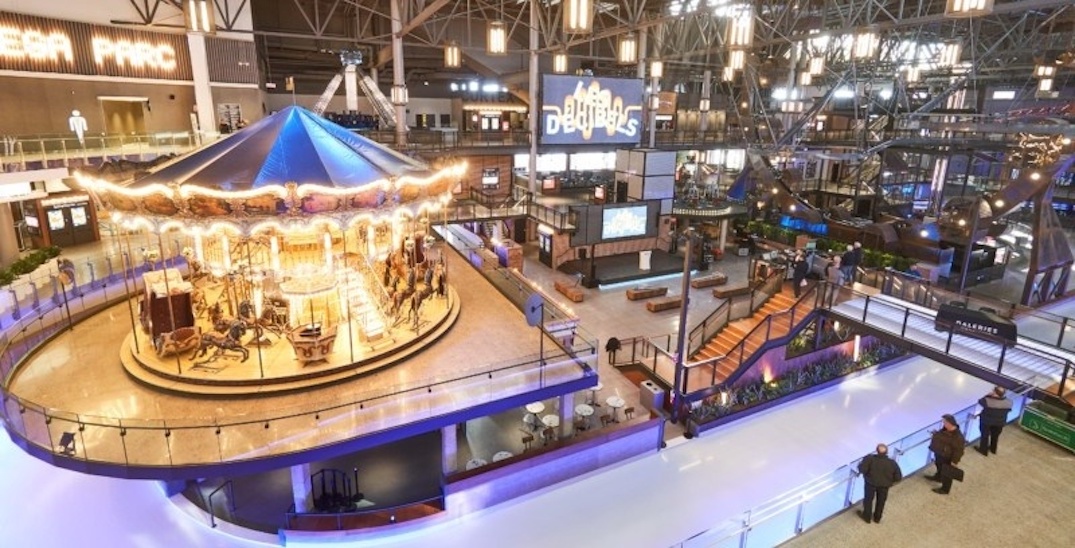 Saying “I’m going to the mall” has a lot more weight when referring to Quebec City’s Méga Parc.

Instead of heading to the mall to pick up clothes, books, and accessories, Méga Parc gives mall-goers the option to ride a carousel, go skating, or tackle a roller coaster.

After over a year of major construction (and a $52 million investment) Galeries de la Capitale’s Méga Parc has now entered its second year and should probably be on your road trip radar.

The mall is the largest indoor amusement park in Quebec and the second-largest nationwide. It features 18 rides and experiences, including a spinning pendulum ride, an obstacle course, 4D movies, a giant ball pit, the longest indoor skating rink in the country and The Zénith, the first spokeless Ferris wheel in North America.

“The Méga Parc offers an unbeatable and unique experience you won’t find anywhere else in Canada,” said Stéphan Landry, General Manager of the shopping mall. “It’s a big draw for tourists and people visiting the Québec City area, especially since it’s an indoor activity families can enjoy all year-round.”

The indoor park is inspired by the Industrial Age and the world of Steampunk. Méga Parc features the Patinarium – a 750-foot ice skating circuit that runs through the entire park.

The Télégraphe is a 40 foot high suspended glider coaster that runs right through the spokeless Ferris wheel. The Pendule, the interactive 4D Cortex theatre, and the many arcade games can be found in the Salle des machines.

Other attractions include the Arsenal, the Piston, the Centrale, the Hélix, the Express, the Convoyeur, the Pare-chocs, and the Mini-mousse amusement park for toddlers.

The park’s high tech elements include state-of-the-art lighting and sound, a giant screen, a stage for shows, and a water fountain offering up a dazzling display of water and light.

Appealing to children and adults alike, check out the Méga Parc’s website for a detailed list of attractions, pricing, and layout.

When: Méga Parc is open year round
Time: 10 am to 9 pm
Where: 5401, boulevard des Galeries, Québec
Price: Free admission, varying costs per attraction