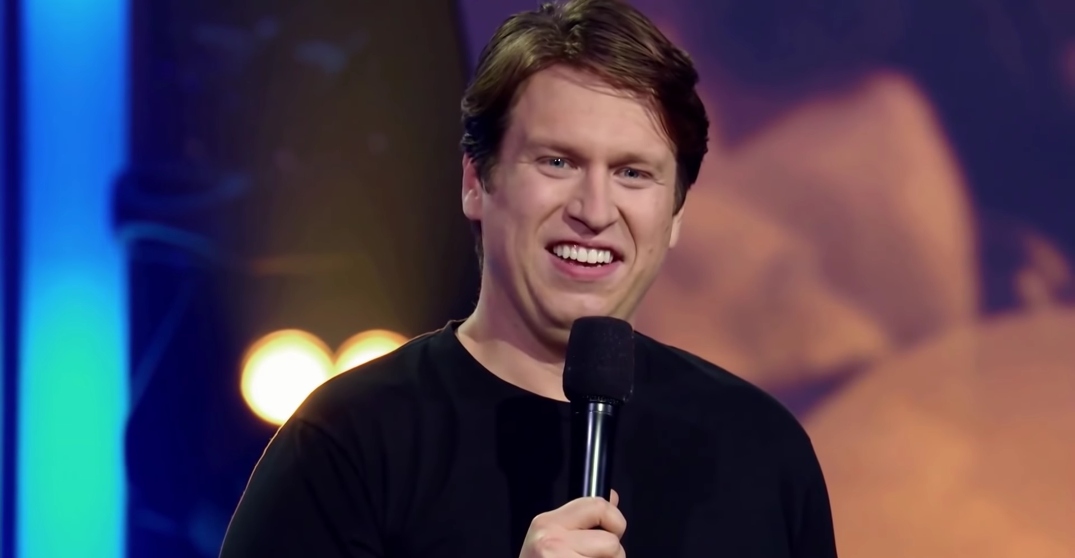 Among many things, Pete Holmes is a stand-up comic, actor, writer, cartoonist, and podcast host. And in case you couldn’t tell by his infectious grin, he also happens to be one of the nicest people working in comedy today.

Holmes, who will be appearing in multiple Just for Laughs shows over the next week, sat down with Daily Hive to discuss exploring the Montreal food scene, his “full-circle” comedy moment, and the evolution of his career.

The 43-year-old says he’s performed at the Montreal festival so many times now that he has actually lost count.

“It’s nice to be included in this community. Not really as a status symbol, but as something that we [comedians] all do,” says Holmes.

As a young comic, he got his big break right here in Montreal as part of Just for Laughs’ 2009 New Faces showcase. And while he has been selling out shows for the better part of the last decade, he says coming back is always a treat.

“All the comedians that are on the road come here, and we all agree to mingle in the same hotel and eat the same gravy fries,” he says. “And I think that there’s something nostalgic about that, and fun.”

Now, three hour-long TV specials and one bestselling book later, Holmes is paying it forward by hosting this year’s edition of the New Faces shows on July 27 and 28.

“I don’t remember who hosted my New Faces showcase, and that is not a slight on them, but I remember thinking that that was a cool thing that they did,” said Holmes. “To ‘take the bullet’ is what we call it in the business. You go up first, you warm them up. It’s not exactly like a glamorous thing. It’s not like hosting a gala or something. But to me, it’s like really authentic and special.”

Holmes says he knows the struggles that come with making it in comedy. As a result, he hopes to be a positive force for the newcomers. “Some guys and women go out there, absolutely fearless. But if they’re like me, you feel this pressure, this expectation,” he explains. “So I just want to be the smiling golden retriever face that makes it as gentle as possible.

Rising above the adversity the business brings was the premise behind his semi-autobiographical HBO show Crashing (2017 – 2019), which he wrote and starred in. Talks of filming a Montreal episode were in the works, but never came to fruition when the show ended.

On a personal note, Holmes added that one thing he loves about the city, aside from the festival itself, is the food scene — especially as a vegan. “If I go to Montreal, I always am surprised and delighted that there is not only vegan, but raw vegan food. It’s good pre-show food,” he says. “I can’t recall the name of it, but I’ve gone, and I will certainly be doing that again.”

Holmes will probably need all the raw vegan energy he can garner since he will also be a very busy man as the festival comes to a close. Along with hosting the New Faces showcases, Holmes will headline a show entitled Pete Holmes & Friends, record a live version of his podcast You Made it Weird, and appear as a supporting act in the Patton Oswalt Gala.

When asked what fans can expect from his Club Soda shows, the Massachusetts native says his method as a headliner is a little unconventional. “I like to go first when I do a show. I like to get the first crack at the audience. I’m all juiced up backstage. Hopefully, they’re excited that I’m there. So let’s get to it.”

Holmes, being the considerate comic he is, also lets his “openers” follow his act to relieve some of that pressure. “I think it’s good for those supporting acts too. I don’t want to send somebody out cold to take the bullet. Like go out and enjoy the people who like me, instead of having to warm them up for my benefit.”

As someone who’s been on both ends of the billing, the comedian has a simple yet effective piece of advice for anyone starting out: “If it sucks, that’s how you know you’re doing it correctly,” he says.

“That’s my advice. When things are hard or humiliating, just know it was that way for everybody… except maybe Dave Chappelle.”