We may not have the force of Jurassic Park in Toronto, so consider Montreal more like Jurassic Park East tonight, when the city hosts a giant Raptors viewing party for Game 5 of the NBA Finals.

Peel Street’s Grand Prix weekend festivities will trickle into tonight as the road will remain closed to vehicular traffic and host a giant screen for the Raptors’ potential championship game.

City officials confirmed in a phone call with Daily Hive that merchants on Peel Street have been notified of the changes and the city will welcome another street-side party as our neighbours to the west try to hoist their first ever NBA Championship.

The Raptors will face off against The Golden State Warriors at 9 pm ET at Toronto’s Scotiabank Arena for Game 5. 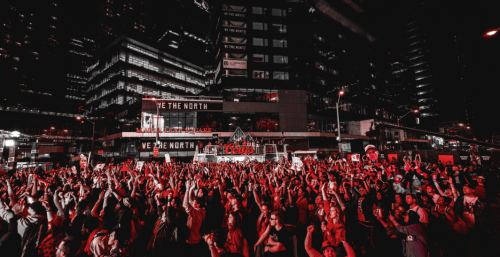 Fans in Toronto have already begun lining up for tonight’s game on Saturday as Jurassic Park, located just outside of Scotiabank Arena, prepares for the potential championship-winning night.

Admission to tonight’s Peel Street viewing party is free and we’d recommend showing up early to beat the probable herds of people.

The giant screen will be set up just off Peel Street and Boulevard Maisonneuve.

Luckily, a red Canadiens shirt works with the Raptors colour scheme as well.

Hey, we can dream, right?