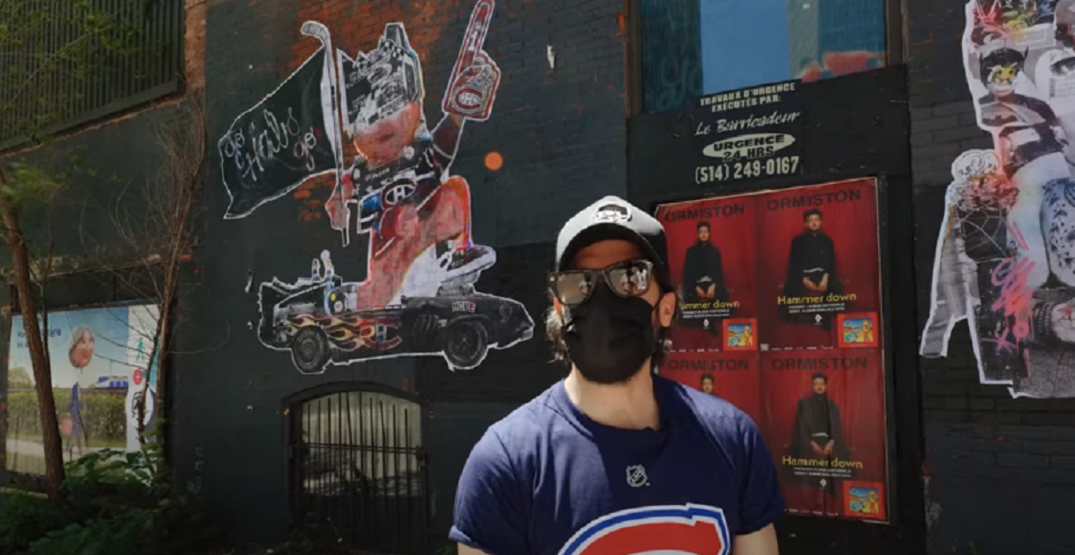 Wander down to the corner of Saint-Antoine and de la Montagne in Montreal these days and you’ll notice a new art installation plastered up on a otherwise plain black brick wall.

The art is unequivocally Youppi!, the beloved Canadiens mascot, waving a foam finger and a Habs car flag while leaning out of a flame-decorated sports car.

But there is something radically different about this version of Youppi!.

Enter Stikki Peaches, a world-renowned Montreal-based street artist and the creator of the mural that’s been creating an online and in-person buzz as Canadiens fans have been flocking to take photos of and with it, as it’s located just steps away from the Bell Centre.

The artwork is a mixture of a classic black-and-white style with enough an accent of the traditional Canadiens red mixed in.

He added that the process — from being approached by the Canadiens to actually putting up the mural  — came together in about the span of a week.

“With the way things are going with the team, just having [the chance] to work with the Habs is something [special],” Stikki Peaches said in an interview with Daily Hive. “It’s just finding your place within the city, and adding your touch and adding your voice to it.”

The Canadiens and Stikki Peaches had previously collaborated on a mural project in 2018, and he said he was eager to create another piece of memorable artwork.

“I jumped all over it. The best part of this is they give me 100% creative freedom on what we did here,” he said.

Memories of the “Cinderella” 1993 Stanley Cup victory for the Canadiens over Wayne Gretzky’s Los Angeles Kings are flooding back for the native Montrealer.

“We’re feeling that kind of same energy. We’re due for our 25th Cup,” Stikki Peaches said. “There’s no better time. I mean, this is the time for us to, to all unite and lift up the city again.”

“Restaurants just opened up again, businesses opening up, people are out in the streets,” he added. “It brings a lot back to the city.”

Despite coming into the playoffs as underdogs, Stikki Peaches said he always believed the Canadiens had a playoff run in them this year.

“I swear to you, I always knew that the Habs were going to beat the Leafs in the first round,” he said. “You know, I always am a diehard fan, I believe in them until they’re out. And after that, I mean anything else was just going to be an added bonus.”

The Canadiens are set to host Vegas tonight in Game 3 in their first semifinal home game since 2014, with Game 4.

“It has us all hoping and dreaming because, you never know,” he said. “This is the playoffs. Anything can happen and they’ve proved that so far. We’ll see. These are two huge games [coming up].”

Stikki Peaches’ work has been featured throughout Italy, as well as on the streets and in galleries through cities such as London, New York City, and Paris.

As for his distinctive artistic style, Stikki Peaches said that it’s been an ongoing work in progress since he began producing street prints in 2008.

“It’s just something that I’ve developed throughout the past 10-12 years, continually evolving and using the streets as a canvas.”

A big fan of the Italian national men’s soccer team, Stikki Peaches is also looking for a big win on the international side as his team takes on Wales Sunday at 9 a.m. ET at UEFA Euro 2020.

“We got a lot of sports watching this weekend,” he said with a laugh.

And while he’s seen pictures and videos of many Canadiens fans loving his newest artwork so far, there’s one person — or, creature, rather — that he’s looking forward to the checking out the print the most.

“I heard a rumour that Youppi! might be taking a picture with the mural itself,” he said.