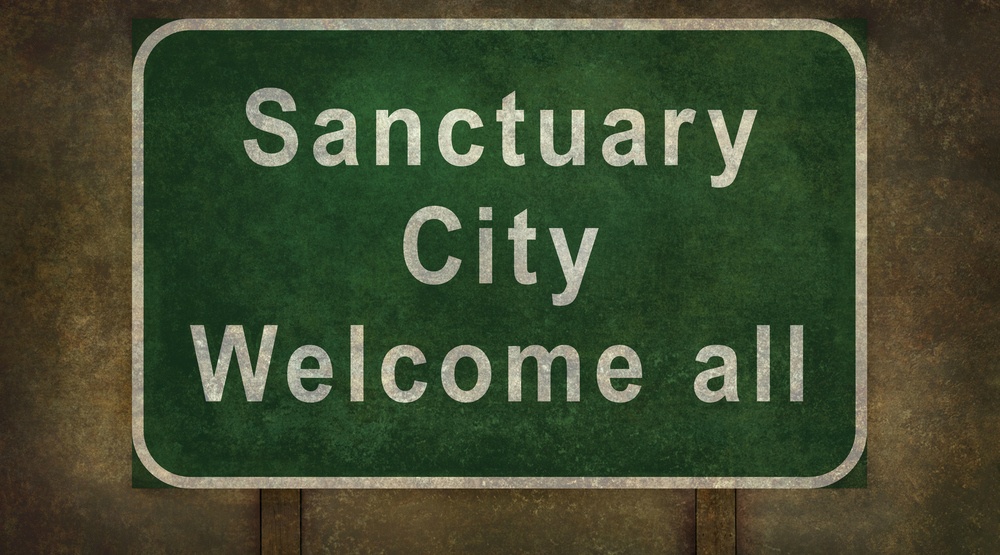 About two weeks ago Ricochet first reported that Montreal was among five major Canadian cities submitting motions to their city councils, aiming to become “sanctuary cities” where services to non-status and undocumented immigrants would be guaranteed.

Yesterday, the City of Montreal unanimously approved that motion (put forward by Montreal mayor Denis Coderre) and joined Vancouver, Toronto, Hamilton, and others as one more Canadian city to be designated a “sanctuary city”, where access to such services as city-funded shelters, housing and food banks will be guaranteed. Ottawa is expected to soon follow suit. Saskatoon and Regina are also considering it.

Explaining the motion, mayor Coderre stressed in most interviews that people desperately crossing the border alone or with their families (often consisting of very young children) are victims who have fled their countries because of political or religious persecution, and who are simply seeking a safe place. The mayor suggested that Montreal could offer that for them. Mayor Coderre has been quite vocal on social media about what’s going on south of the border and how disapproving he is of Trump’s policies.

“One of the reasons I’ve done that is clearly because of what’s happening in the United States and what I’m witnessing in Europe,” mayor Coderre said during interviews with the press. He emphasized that if the undocumented migrants don’t pose a security risk or don’t have a criminal case against them, they will be allowed to stay and integrated into society here.

The motion comes as more and more people are fleeing the US and crossing into Canadian territory. Canada Border Services Agency recently revealed that 452 people filed a claim for refugee asylum at Quebec-U.S. land border crossings in January alone. As tensions rise in the US and as rumours circulate that even more aggressive tactics will be employed by the Department of Homeland Security, it won’t be surprising if those numbers continue to rise.

While the motion is well-intentioned and comes from a good place, many fear that it’s purely symbolic and won’t afford the protection that’s needed. Solidarity Across Borders, a migrant justice organization in Montreal active since 2004, issued a press release demanding that the city implement tangible and meaningful measures.

One such measure is non-collaboration by the Montreal police (SPVM) with the Canada Border Services Agency (CBSA). “The City of Montreal has direct authority over the SPVM, who every day arrest and hand over undocumented migrants over to the CBSA, in flagrant violation of what minimally a Sanctuary City is supposed to be, reads the press release.

“Without grassroots pressure, opportunistic politicians will be content with empty symbols, gestures and photo-ops,” adds Stacey Gomez, a community organizer with Solidarity Across Borders.

At the end of the day, it remains to be seen how local police will deal with undocumented immigrants, and perhaps Montreal should reach out to Toronto and Vancouver city officials and learn from the valuable experience these “sanctuary cities” must have gathered over the years.

The decision to designate Montreal a “sanctuary city”, of course, has been met with differing reactions. Many Montreal residents are proud and happy to have their city become a safe place where undocumented immigrants can find assistance, shelter, and healthcare services.

I am one of them. The videos I’ve seen and the stories I’ve read of frightened, desperate, exhausted, frostbitten people, risking life and limb crossing the border in sub-zero temperatures, cowering at the sight of our RCMP officers because they’ve only previously encountered violence and aggression at the hands of security officials made my heart sink. I want to live in a country that does not send desperate people away, but, instead, treats them with dignity and kindness.

Yes, there are people who will be quick to say that we have our own problems here. It’s the usual “not in my own backyard”, “us first”, and “what about our own veterans and homeless?” reactions we see play out when we extend a hand. In the overwhelming majority of cases, the people throwing those justifications around for their unwillingness to extend a helping hand are never currently doing anything about Canada’s existing social problems. They just like to deflect the conversation and appease their conscience.

Canada is not immune to criticism and we have our own share of major social problems to tackle. Montreal certainly has its issues too. But even the most curmudgeonly among us would have to admit that as a city we have it good and our basic needs are met.

Merit and hard work aside, most of what we have is a fortuitous accident of birth. If we had been born somewhere else, and had to flee that country because of war, religious persecution, our sexual orientation, or our politics, that frostbitten, exhausted, terrified person we see on the news could be any one of us. But it isn’t. We’re standing on the other side of that border crossing, and we currently have the opportunity, to either send them away, or welcome them in. Montreal has made it clear where it stands.